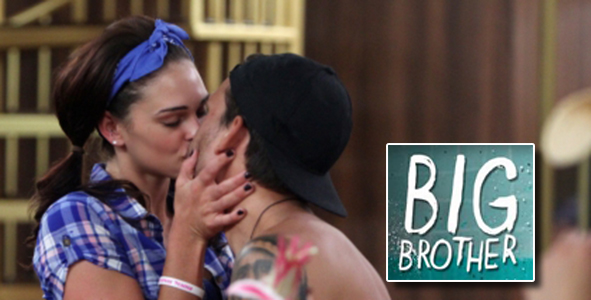 Last week, I showed statistically that showmantic behavior is advantageous in the big brother house. The events that have unfolded since  — specifically this week’s eviction of Nick Uhas — underlined some of the reasons why showmances are so powerful in the game. From an analytic standpoint, McCrae and Amanda were primed to be the swing votes in this week’s eviction. Once they decided to vote against Nick, the dynamics of the house were such that, at minimum, a 6-5 vote to cause Nick to U-haul his stuff out of the house (Spencer hopped on the voting train at the last minute to cause a 7-4 landslide). Historically, showmantic partners like McCrae and Amanda show concordance in voting 83% of the time (that number includes several non-overlapping votes between America’s Vote via Eric and Jessica). More importantly, once a showmance (when both members are eligible to vote) agrees collectively to evict an individual their success rate is 96%. Therein lies the power of a showmance; one swing vote is powerful, two unified swing votes are tremendous. It’s likely that this power is leveraged by showmances to build alliances and increase their chances of getting further in the game.

When members of showmances make it to the finale, the second most powerful aspect of this type of alliance comes into play — influencing the final vote. Ten showmantic individuals have made it to final vote and seven of them ended up placing first. The uniting factor of all the individuals in a showmance who lost the final vote: none of their showmance partners were on the jury (In the case of Erika her partner, Boogie, was sitting in the final 2 with her). I can’t quantify the extent to which having your partner in Jury House, arguing your case for you increases the likelihood of winning the game — but intuitively I suspect it is valuable. Simple math informs that every vote you can secure on the jury increases your likelihood of winning. If your other half is on the jury, that is a guaranteed vote; 100% of showmances have voted for their other half on finale night. That figure includes Diane voting for Drew to win even though he single-handedly evicted her in 3rd place. Drew would win that vote 4-3, as would Jillian and Rachel, highlighting the value of that one guaranteed, and potentially swing vote (or a misplaced Topaz vote). In fact, 36% of big brother winners have been decided by a single vote. To a lesser extent, having a guaranteed vote is beneficial during the regular throes of the game. When members of a showmance are nominated for eviction they survive 68% of the time if their partner is still in the game. Once their partner has left the house, their block survival rate falls to 60%.

So then what is course of action to get a dangerous showmance out of the game quickly?  The answer is pretty simple: nominate both members of the showmance at the same time to increase the likelihood of eviction. 87% of the time when a couple is nominated as a duo one of them goes home. The latter number is so high since the couple both needs to win the veto and secure the votes to keep their partner in the house Although this point may seem obvious, historically 48% of the time, a single member of the showmance is targeted while their partner is allowed to vote, and as a result only 21% of those showmantic players go home. If this piece of bad gamesmanship is employed this summer, McCrae and Amanda’s run as a power couple may last for a while. The numbers are in their favor.