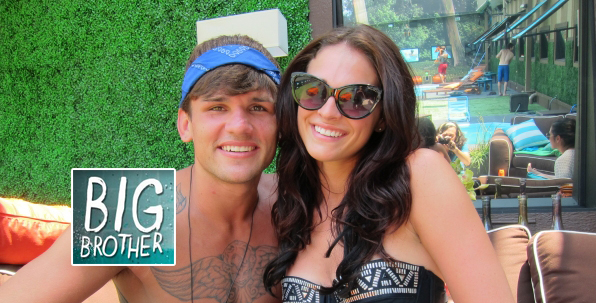 David made it clear in confessionals and pregame interviews that his purpose on big brother was not to win a million dollars but instead to find true love. This comment was a spit in the face to those who revere game play above all else. David was on a mission to revise the oft-muttered cliché that winning must always be put before romance. I beg your indulgence for a minute: what if he was on to something? Do we really have proof that getting laid and getting paid are mutually exclusive concepts? Are players in a showmance statistically worse off than those who abstain? There’s only one way to find out — dig deep into the numbers.

Listed below is the season-by-season history of showmances in the big brother house (special thanks to @BlondeLife for helping draw some of these designations).

For the purposes of this column a showmance was defined as a self-identified couple that engaged in non-plutonic activity (minimum: making out):

Season winners are bolded
Season runner ups in italics
aThough often described as a ‘flirtmance’ Will and Janelle did make out and potentially more
bMatt/Natalie’s unrequited ‘blowmance’ not included, since the two were not a couple
cJames/Chelsea’s showmance excluded to the complication of James reentering the house
d Jessie/Natalie/Lydia exluded as a love triangle not a showmance
eDaniele/Domonic’s ‘flirtmance’ excluded since the couple was plutonic while on the show
fReturning couples included as independent data points

Winning big brother and being in a showmance are undeniably related. A stunning 57% of the big brother winners engaged in showmantic behavior during their season. If you prefer, 23% of the individuals in showmances have gone on to finish either first or second in the game. A player selected at random and a non-showmantic individual have a 14.5% and 11.7% chance respectively of accomplishing a similar feat. Furthermore, being in a showmance is not an all-or-nothing proposition, as whole individuals in showmances fair better than the average houseguest.

On average a player in a showmance finishes in 6.26th place, as opposed to the average houseguest who finishes in 7.31th place. The benefits of showmances are gender neutral. Males have marginally outperformed their female counterparts in average finish. On the other hand, females have outlasted their other halves more frequently and have totaled more finales than the men. Male and Female showmancers have each taken down 4 big brother titles. Taken as a whole, the data suggests that it is hard to predict which member of a showmance will do better. If prior seasons have predictive power, it is better than a coin flip that one of Aaryn, McCrae, Jeremy, Kaitlin or Amanda will end up winning the season. The big question that remains is why do showmantic players fare so well. The answer is in the data set, but that will have to wait till next week. While you wait, pour one out for David, the numbers were in his favor.