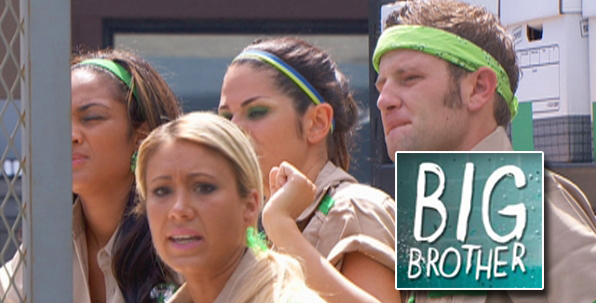 Total number of wins in POV and HOH competitions is the traditional statistic used to evaluate competitive prowess in Big Brother. This simple metric highlights Janelle as the greatest competition player in the history of Big Brother because she holds the record of 9 HOH/Veto competitions wins in a single season. Similarly, it suggests that Dr. Will — who won a grand total of zero competitions over 2 seasons (and 147 total days!) in the Big Brother house — is the worst competition player of all time. With all due respect, Will, you first have to establish that you possess the ability to win a competition before you get credit for ‘strategically’ ‘throwing’ them. I previously demonstrated a correlation between winning competitions and winning Big Brother, so I wanted to look deeper into this year’s crop of house guests’ challenge performance to help unearth the possible winners:

1 His team finished first in the second HOH competition, even though Aaryn was then declared the HOH. 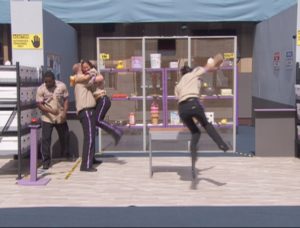 Comp. wins do reflect, to some extent, who the best competitors are. Few would scoff at the notion that Jeremy – beast mode sold separately – was one of, if not the best physical players this season. However, this metric stops short of painting the full picture; that is, unless you think Nick and Amanda are equivalent competitors, or that Elissa is better at competitions than most of the house.  By definition, comp. wins are binary, and thus, you are scored equally for a last place finish and a second place finish. Of course winning matters, but a player who finishes in the upper tier of most challenges is likely more of a challenge threat than someone who consistently finishes poorly in competitions but lucks into a single win – I’m looking directly at you Elissa.  It is easy to selectively ignore the fact that first, second and even third place is often separated by a lucky bounce, a stab in the dark tiebreaker, or a nomination-related deal of some sort. Finally, because of the team nature of have/have not competitions, big brother analysts often ignore how players fair in them. I would suggest that these challenges have overlapping skill sets with HOH and POV competitions and undoubtedly contain information about the players’ true competition skills.

To gain better insight into who the best competitors in BB15 have been thus far, I examined the full portfolio of each players’ competition performance. Using this data set, I created two metrics to evaluate competition prowess a:

(1) Mean Finish Above Dr. Will (MFAD) – is the normalized average finishing position of a competitor over all the competitions in which they have competed. b
(2)Weighted Competition Wins Created (WCWC) – Is a cumulative total of how much higher a player placed than an average competitor — that is, a player who on average would finish in the exact middle of the pack in a competition — inversely weighted by number of players on their team in that competition. c

The number of competitions competed in, MFAD, and WCWC for all competitors up to and including the 4th HOH competition is listed below:

These two metrics paint a slightly different picture than competition wins. Firstly, they highlight that, for the most part, the house has been targeting and evicting the best competition players; Jeremy, Nick and Caitlin all ranked in the top 3 of either MFAD, WCWC or both. Nick is a prime example of the strength of these metrics. Although he did not win an HOH or POV, his portfolio includes a second (because of a deal struck with McCrae) and third in 2 HOH competitions, a have not competition win and placing slightly below median in a Veto competition. This is more accurately reflected in his MFAD (second highest) and WCWC (5th highest despite only playing 4 comps) than in his comp win total (0, tied – last). These metrics also suggest that the house was misguided in targeting David and this week Howard; both individuals ranks as below average players in MFAD and WCWC.

Much like the lack of a Yoga studio in the big brother house, these statistics are unkind to Elissa. Her competition ability is exposed as being below average by MFAD, and as the second worst by WCWC. This seems like an accurate representation since her single competition win happened because she blindly found a 20-point square. She does have a few above average finishes in team competitions but also sports 3 last place finishes in individual competitions. She is an example of a player that has benefited from being on strong teams in team competitions. Based on advanced metrics, the only player that is demonstrably worse than her at competitions is Amanda.

These metrics also suggest the houseguests would be better served targeting McCrae as the stronger portion of the McManda Showmance. Both metrics, but especially WCWC, suggest that McCrae may be as good if not better at competitions than Jeremy. Playing in just 8 competitions he has put up one and a quarter more expected wins than an average houseguest; this is a higher WCWC than Jeremy when adjusted for competitions played. Now that some of the big competition threats have been eliminated from the house, the only above average players remaining, Aaryn, McCrae and the surprisingly able Helen may be poised to dominate competitions going forward. By the end of the season, I expect one of these three players to have notched the most competition wins and perhaps the big brother crown. The numbers are in their favor.

a Every POV, HOH and have/have not competition was scored using rank order based on how many players competed. For example, a player placing 1st place in a veto competition would receive 6 pts, 2nd would receive 5 points 6th/last place  would receive 1 point. In team competitions,  all member of a winning team would receive the same number of points for 1st place (eg. 3 points in a have not comp), all 2nd place team members would receive second place points and so on. Finishing position was then normalized within each competition such that a first place finish finish would receive a 1.0, the median finish would be 0.5 and last place would result in a 0.0.
b MFAD scales from 1.0 (won every competition they competed in) to 0 (came last in every competition played, or if you prefer, are the challenge equivalents of Dr. Will) in the same way that normalized finish does. All competitions contribute equally to its formulae and are averaged such that players do not inherently benefit from competing in more competitions
c For WCWC Competitions are weighted based on how many players were on a team such that a Have not competition with teams of 4 would be worth ½ of a two-player per team HOH or a ¼ of an individual POV competition. Each player’s finishing position for competitions participated in is normalized, weighted and summed and then the normalized, weighted and summed median competitor finish for those competitions is subtracted from the total. This can result in both negative scores — indicating a player is worse than average — and positive scores — indicating a player is better than average.