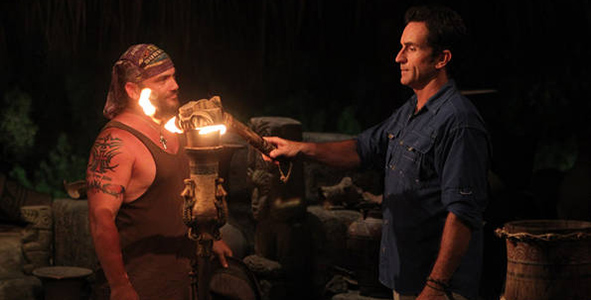 Skupin got burned, RHAP fan favorite Dan Lue sucked in a challenge, and Terry Deitz found a god-idol.  Boston Rob’s Survivor journey began, and The Rooster’s sadly ended.  Read on to find out what happened… This Week in Survivor History!

Before Rob C’s mock tribal council on Survivor: All Stars and Shane Powers’ rock blackberry on Survivor: Exile Island, Boston Rob, Sean Rector, and Hunter Ellis ran a fake news show on Survivor: Marquesas in order to keep their Maraamu tribe entertained.  While this wasn’t necessarily an important strategic point in the season, or even something that changed the direction of the game, it was one of the most fun scenes in Survivor history.

Sean was the show’s anchor, Hunter did weather, and Rob was of course in charge of the food review.  He reported on pancakes and sausage, coincidently not the last time he’d talk about sausage during Marquesas (more on that in a few weeks), but we all know he was really just thinking about crispy rice.

Another segment involved a chat about nonos, which apparently are the Marquesan equivalent of mosquitos, but 45 thousand times worse according to Boston Rob.  After Hunter claimed that he had been bit more by the black nonos than the white nonos, Sean ‘called in’ pretending to be Al Sharpton ranting about how the black nonos are always being blamed and incarcerated.

While we all love intricate strategy and big moves, what Rob Has A Planet would call ‘Level 1 Survivor’, character scenes like this one are also very important to the show.  While a game, Survivor is also a fascinating look into social dynamics.  The Marquesas morning show was done for the purpose of breaking the monotony of living on a beach for a long period of time, and in the processes, entertained the Survivor viewers as well.

The following moment was also not strategy related, just really, really funny.  On Survivor: Micronesia (Fans vs. Favorites 1), Joel Anderson, the biggest guy on his tribe, and Chet Welch, the scrawniest, were for some reason paired in a challenge in which they were harnessed together while trying to catch the other tribe’s pair.  At each obstacle in the challenge arena, Joel blasted through while Chet was dragged along for the ride, banging his head multiple times in the process.  It shouldn’t come as a surprise that they weren’t able to catch their counterparts, Parvati Shallow and Eliza Orlins.

After the challenge, Joel and Chet had perhaps one of my favorite short dialogues in Survivor history.  The following is the transcript, which basically sums up the pair’s relationship.

After being used and abused throughout the challenge, Chet had the last laugh.  At the end of the episode, he was again dragged along, but this time into Cirie Fields’ blindside of Joel.

I’ve never played Survivor, but I can imagine that winning tribal immunity is a great feeling.  Those early stages in the game can be very dangerous for anyone, as alliance lines are often not yet fully developed.  If my tribe won immunity, I’d be happy that I had at least 3 more days guaranteed in the game and I was that much closer to making the merge.

The Manono tribe of Survivor: One World was of a different mindset.

After winning immunity on the fourth episode, Colton Cumbie decided that he’d had enough of Bill Posley.  Differences in their lifestyles and backgrounds, and the fact that Bill had been talking to Colton’s alliance member Leif Manson, agitated Colton to a point at which he’d rather his tribe give up immunity to the Salani tribe than keep Bill around for three more days.

Somehow, Colton was able to convince his whole tribe that this was a good idea.  In an unprecedented move, the Monono tribe went to tribal council after winning the immunity challenge.

While Colton was the ring leader, I don’t believe he’s most to blame for making the dumbest tribal decision in Survivor history.  For him, it actually made some strategic sense because he was able to get rid of someone with whom he clashed.  Bill, the one who was voted out, should bare more of the responsibility.  All it would have taken was one person on Monono to nix the plan to give up immunity, and Bill, who was the obvious one on the chopping-block, had the biggest reason to do so.  However, he went along with the tribe and paid for it.  Usually deviating from a unanimous tribe decision is a bad idea, but if Bill had dissented, he would have been around for the tribe swap and anything could happen after that.  No wonder Jay Byars was so “bum-puzzled”.

While it was a terrible gameplay move, it was great TV, and was probably the best thing that came out of the One World concept.  If the two tribes weren’t living on the same beach, I don’t know if this would have been able to happen.