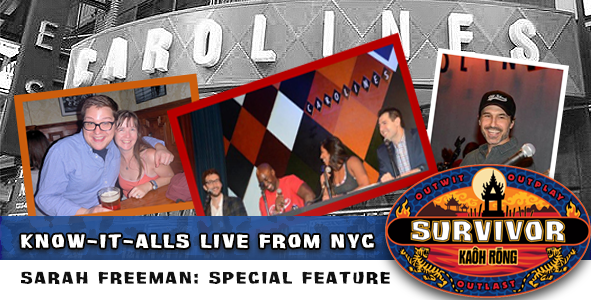 At some point in the early hours of Thursday morning, I was talking to Rob (as one does) when he idly suggested that I write a blog of the Know-It-Alls Live event. And without thinking, I replied, “Why not?”

In retrospect, that wasn’t the smartest answer, since I had been enjoying a low-key evening, steering clear of the activity hotspots, but… It was a “Why not?” sort of night.

(N.B. I suggested to Rob that he keep on drinking through to his interview with Debbie to make that one for the ages. His answer was considerably less committal than “Why not?” And that, dear reader, is why I am but a humble blogger and Rob is host of an award-winning podcast that can sell out Carolines on Broadway in the middle of the working week.)

Everybody who was in Carolines on Wednesday night has a different story to tell, one that might last just a day or two, or as long as a week. For me, I only had 24 hours in New York, but I was going to make them count, and that meant harnessing a group of people for dinner. Trust me, cats and toddlers have nothing on RHAPpers when it comes to getting organized.

After a lot of “Are you coming? Does this person want to join? Let me check with that person,” I thought I’d confirmed a group of six, only for Colin Stone to add the Big Brother crew to our group on Tuesday night. 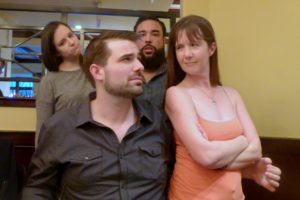 Lasher, Colin, Ari, and Sarah: Starting as we meant to go on.[/caption]

We weren’t sure if we were ten or eleven. I managed to tell Mike Bloom 6:30 and everybody else 5:30, Ari Ferrari failed to mention that Ali Lasher would be joining us just for drinks, and Alex Kidwell had to leave early to set up for KIA, but there was a good half hour where we were all sat at the table together to debated the merits of putting Reality Podcast Host on your résumé vs. Big Brother Contestant. (Protip: choose the former.)

We split up for the main event, with the Big Brother correspondents at one table and us rabble at another (with Lasher swapped out for Mike’s wife, Angie.) Watching Survivor in a room full (and I mean full) of people is pretty amazing. Watching an episode as eventful as that one in a room full of RHAP fans? Incredible. Also loud. The audience was squarely on the side of the women who got cheered for every point they scored against the men. (Things went nuts when Debbie was throwing at the reward challenge.)

And of course, we were watching with the virtual friends who know exactly what our pet peeves are. Five seconds into the episode, the girls’ alliance got referenced by the men, and Colin turned and smirked at me—and promptly learned that the difference between an ocean and a table is that a Brit can reach across the latter to smack you. Real-time strategy talk with Colin and Mike is every bit as awesome as you think it would be. Beats live-tweeting any day of the week. (Just as well since none of us could get a signal.)

Late arrivals were less fortunate. With the event sold out, those who came in after the episode started were obliged to stand against the wall—no matter who they were or how much might be in their bank account. That means you, reigning Survivor champion, Jeremy Collins. And you, Natalie Anderson. Maybe next time you’ll read the contract…

The actual Know-It-Alls show needs no recap. You can watch it here.

Afterwards, the attending Survivors made themselves available for pictures. Ethan Zohn—old school, winner, professional nice guy—was far and away the man of the hour. Jeremy Collins also garnered a lot of excitement, as did the legendary Billy Garcia and immaculate game-bot, Liz Markham. There was a great line-up there including Josh Canfield, Francesca Hogi and the inevitable Eliza Orlins. Many thanks to Joshua Spaulding who conscientiously took pictures of the Survivor reception line while I skipped it. He did a better job than I could have done!

This year, I was more interested in meeting fans than past Survivors, so Pia Virolainen and I made straight for the after party and Josh Wigler. As he had just flown in from LA that evening, Josh had missed the actual Know-It-Alls event. Instead, he took the time to go home, shower, watch the episode (and hopefully exchange a word or two with his wife) before taking it upon himself to be the foreperson of the after party.

Of course, Josh is also the most popular man in podcasting and as prompt as Pia and I were, he had already amassed a crowd. We did get our Wigler hugs (you haven’t lived until you’ve been hugged by Josh), but then we withdrew to find a table of our own and to seek out other upstanding members of the RHAP community.

If you haven’t been to a live Know-It-Alls, this is where the real fun of the evening is: in meeting the names/aliases/voices we know through social media. Pia wasn’t the furthest ranging fan (Somebody was apparently there from Israel!) but she had travelled all the way from Germany to attend. She and I were representing that key RHAP demographic: the European Older Woman, and we had a great time making references nobody else would understand and discussing how the Big Brother correspondents were “such nice boys”. (In retrospect, what the hell was in our drinks?)

Pia had attended the Patrons’ karaoke evening the night before the live show (I hear Bohemian Rhapsody was quite the landmark event), which had been an easy way for the core of the fanbase to get to know each other ahead of Know-It-Alls. Those of us who missed it were at a clear disadvantage when it came to recognizing our peers, and I owe Pia a debt of gratitude for helping me track down some of the people I wanted to meet. I am also hugely appreciative to those of you who managed to recognize me and came up to say “Hi.” (And I apologize for being rubbish at small talk.)

The biggest ‘get’ of the fanbase might just have been Colin Stone, who, with Dom Harvey, has spent the past five years or so building up what is arguably the best reality podcast outside of RHAP yet had never been to a reality event before. To put this into perspective for all those of us who met Colin on Wednesday night, Dom has yet to meet Colin. (I know. There’s something very wrong about that.) Bravo to Jordan Parhar, Taran Armstrong, and whoever else seduced him into coming down for one night.

Ali Lasher and Brent Wolgamott, consummate social media bad-asses, took it upon themselves to periscope the after party for those who couldn’t make it. We took it upon ourselves to crash said periscopes, and they were entirely gracious about it. I don’t periscope, not being a person who comprehends non-textual media, but thanks to them, the rest of the fandom got live reporting. (No need for FOMO when you can get commentary on Reed Kelly hugging Jeremy Collins as it happens.)

As an introvert, I can only do so much mingling, and eventually, I hit upon the strategy of sitting at the table behind Josh Wigler. After hours on a plane, Josh preferred to stand against the table with a wall of people around him. The people changed, the wall was constant, but the table itself was empty, so I could lean into and out of the conversation at will or chat to another person over a drink.

The popular Wigler topics were the recent Game of Thrones screening and his songwriting methods. (Protip: Songs that can rhyme with Kaoh Rong have an advantage.) However, for me, the biggest revelations were that Josh has an eye phobia and also the most beautiful hands known to mankind.

I regret that I never stopped to talk to Stephen who was accessorizing with a crutch and chose to hold court at a table in back, which was promptly mobbed. Rob was the most mobile of RHAP’s power triumvirate, moving around the venue to talk to everybody. People kept giving him food gifts, and I was finally able to get a conversation with him when he stopped to leave his bags on our table. That conversation, of course, led us here. Always a pleasure, Rob.

As the night wore on, the numbers dwindled but too gradually for the venue which finally kicked us out at 2:30am. Still the podcasting professional, Rob prudently caught a taxi home at that point, but most of us lingered on the sidewalk.

There, a plan was hatched to carry on the revels at a mysterious venue known as The Podcast House, which I am fairly sure is some sort of starter for Jordan Parhar’s plans of world domination. I was privileged to receive an invitation to this exclusive event, but I finally took common sense into account and chose to end my evening there—thus proving that I could never cut it as a journalist.

Podcasters are a hardier bunch, so the plan went ahead without me, but what happened in the Podcast House will have to stay in the Podcast House. (Unless, of course, you are a user of this newfangled Periscope doohickey.) As far as KIA Live is concerned, we are calling it a (most excellent) night.

Thanks again to Joshua Spaulding for letting me use his pictures. Check out his full album on Facebook!

Liked it? Take a second to support Sarah Channon on Patreon!