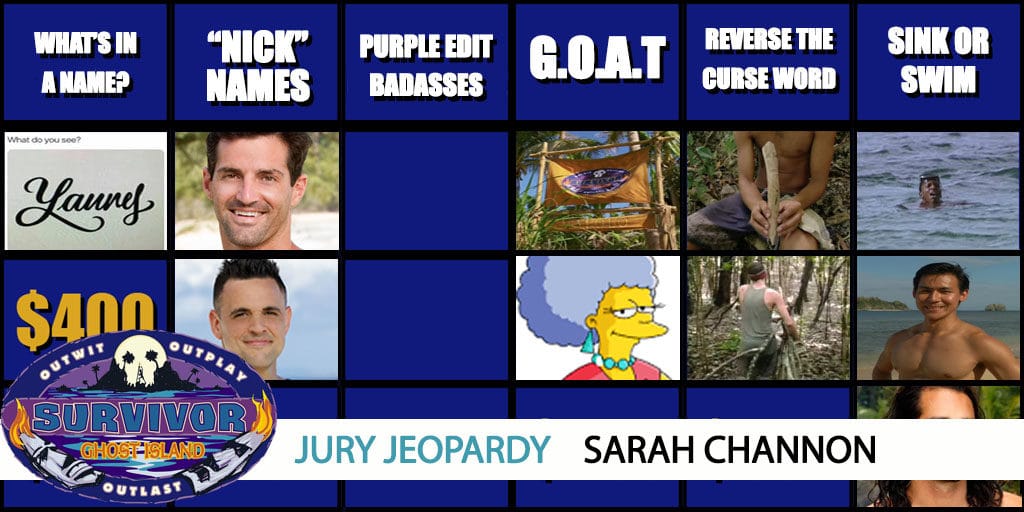 Do you want to play a game? Follow the words…

Survivor writers across the internet come together once more in the season’s most sacred ritual: predicting how the jurors will vote. Last season, Austin Smith at Inside Survivor won by predicting five out of eight votes correctly. Now he’s defending his title against True Dork Times, A Tribe of One, Purple Rock, and, of course, RHAP.

You may have noticed that there have been fewer bloggers around this season. That’s because we’ve been gradually retiring to Ghost Island in a last ditch effort to gain some maturity. Will it be enough to reverse the curse of last season’s loss? Let’s find out as Catherine Lucas, Dan Heaton, Logan Saunders, Michel Trudeau, Matt Liguori and myself reunite for this round of Jury Jeopardy. (With thanks, as always, to Christine LaRiviere for our fabulous Jeopardy board.)

The Foreman of Our Jury
He’s comin’ at you with his Mankey-like Fury
That Hatchet With Dom?
He’s Gonna Bury

Like The LOX, Money and Power is what Chris will Respect
Dom Will Be Leading Off
Wendell is on Deck

Chris will be given the microphone first
The founder of Ponderosa will influence the jury with the burst of a bubble
Cause Ain’t Nothin’ Like the Noble thing, baby
Twenty-two day old blindside so he’s crazy

As to who will finish in the basement
For receiving his vote
Chris won’t bother cause time’s wastin’
He’d rather be at Ponderosa watch
Jenna and Libby on a pole where he’s facin’
Wait? What?
He’s Just KIDDin like Jason
Oh.

Donathan and Chris bonded over their Maw
Did Laurel and Chris connect over anything? Naw.

Matt says: The only Libby story we saw outside of the Morgan episode was all the talk from Domenick about how Libby’s a huge threat because she had Parvati upside. We never saw that play out, but I’m thinking perhaps Libby has some respect for Domenick’s game in the same way he seemed to respect her potential? She probably doesn’t have a ton of love for the remaining Malolos. Other than that… who knows.

Michel says: Des’ theme as a juror will likely go along these lines: I’m a girl who likes it big.  I’m not shy so I made big moves and they were directly in your face, leaving you to stare in disbelief.  My big moves popped all over the place.  I bounced my big moves off of all of you but you couldn’t handle them.  My big moves are sensitive so you had to give them more attention.  Do you even like big moves?  It doesn’t look like you do because you didn’t make any moves.  Look, I have nothing against the small itty-bitty moves that the other girls on this jury are known for; they can be cute, but I’ve always found that bigger is better.  So, you guys have to show me something big tonight if you want any of this.

Matt says: Just like a lot of these jurors, predicting where Jenna’s vote is going to fall is a tricky task. We spent weeks assuming her and Sea Bass were a tight duo, only for him to lead the charge to take her out. I assume Jenna’s vote is likely to line up with Michael’s given their time spent together in the game and continued friendship at Ponderosa. As you’ll see, that doesn’t include voting for her now-boyfriend Sea Bass unless we get an unlikely final three.

Dan says: After receiving a glowing edit this season, Michael will get one last chance to cement his place on a future season. He’ll make the pitch for players that made “big moves” and sell the idea that Jeff loves to hear: MAKE BIG MOVES! Whether it’s Domenick, Wendell, or both, Michael will rave about their gameplay and willingness to take charge. I don’t see him respecting the more subtle game from a player like Laurel or the laid-back chill approach of Sebastian. Michael wants to see a bold player win, and he’ll make the strongest push for them.

Catherine says: Chelsea will, of course, be the official spokesperson of the Jury, confidently and articulately taking control of the question time. She’ll then go full David Murphy, telling everyone why Boston Rob is the true winner of the season and proposing to Probst. For some reason though, none of it will make the show. Purple Chelsea will continue.

Catherine says: Kellyn’s question will 100% be whether the final three played with their heads or with their guts. And then she’ll proceed to give her vote to whoever comes up with the most long winded answer. I suspect that although she probably still feels hurt by the way her game ended, Kellyn will respect game. I don’t see her voting for anyone besides Dom or Wendell.

Logan says: Angela has been so invisible and hasn’t been apart of any majority alliance since the beginning of the game that you assume she has to go home right away in the finale in sixth place. The idea of her making it any further would be heartbreaking for her edit. Hilarious, but heartbreaking.

So with her lack of edit and still being in the game, we have no clue what she thinks of any of the other five contestants. In fact, the only major interactions we have seen of Angela have all been with players that  have already been voted out. Michael, Chris, Chelsea, Kellyn, Desiree, Morgan. Other than the moment this week where Dom says “Remember the hammock conversation, Angela?” that’s been it. We know freakin’ nothing.

Matt says: Domenick has been in a great spot since the merge and really hasn’t had to worry about an opposition forming against him. I see him sitting in the final three, but if somehow he doesn’t, who he’ll give his vote to seems pretty straightforward. He’s had some key allies in the game and you have to imagine if he’s not at the end, at least one of them will be.

Dan says: Who knows what Donathan will say at the Final Tribal Council? As the season has progressed, he’s evolved into a volatile player that expresses his frustrations in front of everyone. Who will he support? It probably won’t be Domenick, who bore his wrath at Tribal last week. I suspect we’ll need some subtitles and that Donathan will be great fun to watch. It’s a strange twist that Donathan might be one of the bitterest jurors. He also might not be ready to crown one of the two big guys like most of them. It will not be dull, I suspect.

Sarah says: Laurel’s tour of jury duty will play out much like her game. She’ll thoughtfully hear out the underdogs, kindly validate their strategies, and discuss the game with them in a rational and open-minded manner.

And then she’ll side with Wendell and Domenick.

Michel says: Sebastian speaking up as a juror: “We are about to turn one of you into a happy, smiley, giggly Banana flavored piece of happy-taffy but I have no idea what to base my vote on.  You guys were so serious, so involved when there really was nothing to do but enjoy the beautiful beaches of Fiji.  Did you take time to enjoy the nature around us?  Did you take souvenirs of this perfect vacation?  If one of you has a seashell to give me, I’ll give you my vote.

Sarah says: So long as none of the final three start rapping, they should have nothing to fear from Wendell as a juror. He’s been in the loop for almost every vote, so he’ll spend more time telling the final three how much he enjoyed playing with them rather than asking them about their game. Before he leaves, he’ll hand out souvenir shell jewelry to everybody, including Jeff.

Vote breakdown for the Tie-breaker:

While we feel Dom would beat Wendell should it come to that hard-fought showdown, we think it’s likely that only one makes the finals, giving us the much more decisive vote of 9-1-0

Feel free to comment with your own predictions below or on social media. Do you have the nerve to go against Dom and Wendell? Will any of our competitors rally against them? Follow the links below to find out: