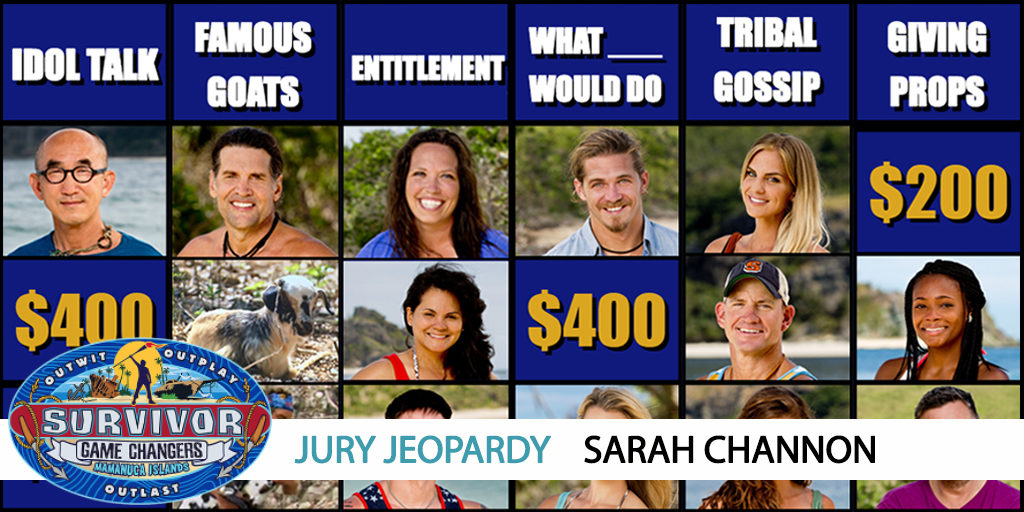 It’s Jury Jeopardy time again, where the greatest (citation needed) Survivor writing sites on the internet pit their wits against each other to predict how the jury will vote. Last season, our team of bloggers carried RHAP to… a joint victory, when both we and Inside Survivor correctly guessed 7/10 jury votes. Clearly, a tie is not in keeping with the sole survivor theme, so this season we are Changing The Game by adding a tiebreaker.

Rules: Predict each juror’s votes in order of preference for the final six. (We will also rank the votes of the final six, though only those who make the jury will be counted.)

If any given juror’s vote is ahead of the other two finalists in our ranking, then we score a point. I.e. In a final three of Aubry, Brad, and Tai, if Hali votes for Aubry, that’s one point for us. If Ozzy votes for Aubry, we don’t score.

HALI
Michel says: Hali will stand up and look around. “I know this is the second time I’ve played this game but I still don’t understand it.  Last time, it was easy because all I had to do was vote for the Blue Collar guy, but now?  Can someone please explain how this game works so that I know what I should be doing here?”

OZZY
Catherine says: Ozzy is going to ask a question about the most important part of the game. He’s going to tell the final three that his vote is still up for grabs, and then ask them who caught the most fish.

Oh, and then, in a hugely uncomfortable moment, he’ll tell everyone that he honestly started to fall in love out there, and he was glad that he got the chance to play again just so he got to spend time with Jeff Probst. Probst will be unaffected by Ozzy’s words, and simply move on to the next juror.

DEBBIE
Michel says: Debbie has waited thirteen days for this… “This was supposed to be ‘Game Changers’ but you were all pathetic idiots.  The only Game Changing move that was made this season was voting out Ozzy and guess who was responsible for that?  I scared you all, didn’t I?  I know that’s why you voted me out of this game.  Now, tell me which one of you didn’t vote against me and I’ll give you my vote.”

ZEKE
Catherine says: What I love about Zeke on the jury is that Zeke is all of us– a nerdy superfan, trying to amuse himself by slipping as many RHAP/Survivor references into his question as he can. If Zeke’s speech doesn’t mention the words ‘game changers’, then I will find Francesqua and eat her rock. Bonus points for Zeke if he manages to work the phrase ‘sucking kneecaps’ in there.

SIERRA
Dan says: Given how Sarah played her and used their friendship to get the legacy advantage, Sierra will show no mercy. The big question is whether Sierra will vote for Sarah despite the hurt at being played. Her question in Worlds Apart was pretty benign, but I suspect the sheriff won’t be so easy this time. They’ll earn her vote! Brad may get a pass since they were such close allies, but after that it’s anyone’s guess. She may be a key vote that Sarah will need if she wants to win. I’m not convinced she’ll get it.

ANDREA
Dan says: If any juror will avoid bitterness, I’m betting on Andrea. Heck, she was tickling Cirie right after the votes were revealed! She didn’t join the bitter party against Dawn in Caramoan, so she won’t do the same with Sarah. I expect Andrea to choose Cirie or Aubry if they make it, but she won’t hesitate to pick Sarah if that’s the best choice. Sorry, Brad. You won’t get Andrea’s vote because she’s bitter. He may need Troyzan and Tai sitting next to him to be her choice.

MICHAELA
Christine says: Michaela will be more bitter than Debbie. She will not vote for anyone who outsmarted her except maybe Cirie. Michaela’s jury question will start with a hair flip and go along the lines of: “What makes you think I should give you a million dollars?” or any other question in which she can highlight herself. Michaela will play up to the cameras and make faces or eat to show her disdain. Should she behave, it will also be with the audience in mind since she is too aware of the cameras at this point. She already mentioned coming back…Yikes.

AUBRY
Sarah says: Moreso than any other juror, Aubry faces a battle between her head and her heart. After her Kaoh Rong experience, Aubry will want to stay objective and analyze people’s strategy. Yet she might lose that battle, fall prey to her inner biases and ask the question that comes from her heart:

“What was the day 39 breakfast like? Were there eggs? Coleslaw?!”

BRAD
Christine says: Brad will work the floor in full courtroom drama style accusing the final three of having blood on their hands as he rearranges the decor at Tribal Council. If Troyzan is in the final three, Brad will ask him to explain who he even is exclaiming: “Because none of us know who you are!” Troyzan will respond tearfully: “I’m a neat man.” At this point Brad will break down completely and, while sobbing, he will say: “That’s exactly what Monica would do. I love you, man!” Brad will vote for Monica.

CIRIE
Sarah says: Will we see upbeat Cirie, congratulating the final three with her signature giggle? Or will we see heartbroken Cirie, seething with jealousy at those in the spot that’s always eluded her?

We Cirie fans may never know, since we’ll be blinded by our bitter tears as she falls a little short again.

SARAH
Sarah says: When Sarah stands up, the three finalists will collectively relax, each secure in the knowledge that Sarah is their best friend out here and will surely lob them a softball question.

That will last until she unleashes her opinion of their strategy: “That’s stupid. It’s boring, and I don’t like it.” And with that, her tally of blindsides will be complete.

TAI
Sarah says: Tai probably won’t ask his question in the most straightforward fashion… there’ll be disclaimers of how difficult this is for him, a botanical metaphor or two… but it will boil down to: “What was your biggest move in the game?”

My question is: Will any of the finalists have the balls to answer, “Killing the chicken.”

TROYZAN
Christine says: Troyzan won’t be Bitterman, party of one (or two with Debbie), but he will recognize great gameplay and reward it. It just might not coincide with your opinion of who played the best game. Sabrina played a good game, and if people could choose Michele over Aubry, why can’t he be respected for choosing Sabrina over Kim? At least he’s not delusional that he’s running the show. His statement would be about playing from the bottom and his question would be: How are you a game changer? Someone has to ask it.

Let us know your own predictions, either by commenting below or using #JuryJeopardy on Twitter. And don’t forget to check out the guys trying to steal our rightful crown:

Jeff Pitman and the Team at True Dork Times