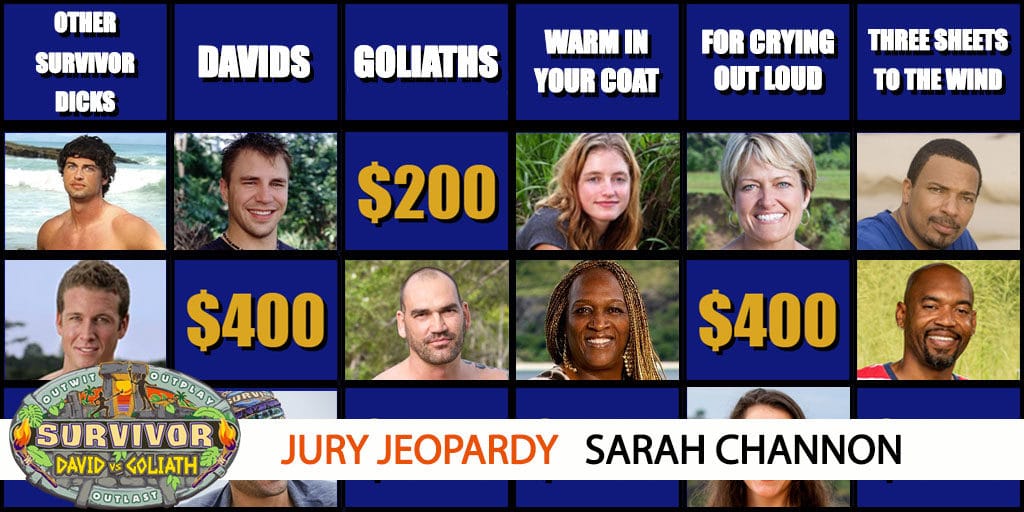 Every season, Survivor’s finest writing websites come together in a competition to predict how each juror will vote. And every season, Austin Smith at Inside Survivor destroys us all.

But this is the season of David vs. Goliath. A season which some might say is the best season ever. (Don’t @ them.) So A Tribe of One, Reality Blurred, True Dork Times, and RHAP will gather our slingshots and see if this is also the season where we. Take. Austin. Down.

Sarah Channon and Logan Saunders are acting as RHAP’s champions this season. We have researched the jurors in depth, analyzed their psyches and are confident that we have deduced what it will take to get their votes, jackets, and rice.

Logan says:
Kara helped split her bamboo (and somehow that is not an euphemism).  Beyond that, we know nothing about Liz’s interactions with y’all. Maybe Nick’s southern accent when they were on Davids pre-merge will be enough? I can’t recall Liz interacting with anybody other than Kara in this group of six. If Carl were here, at least I know I could rank him at the bottom.

Logan says:
All of his Brochachos are gone. This is going to be tough to predict.

Naturally we must assume Angelina is going to be Johnny Impact’s 3:16 because she whooped everyone’s ass. I sense great Goliath loyalty to round out his top choices. The Shaman of Sexy will want to make sure the Davids are pinned.

Sarah says:
Let’s face it, if Kara’s in the finals, Dan’s going to be spending 90% of his time hinting about how they’ll only have one night at Ponderosa before they go home…. That aside, don’t expect Dan to have much of a poker face about who he’s voting for, but the real tip of his hand will be when he invites his chosen finalist to become an honorary Brochacho or Brochacha.

Sarah says:
If there were any justice left in the world, Carl would be served beer throughout Final Tribal Council. Regrettably, the world is not always a fair place, and I fear Carl will have to get through jury duty empty-handed. Expect him to keep things to the point: “I like you, I don’t like you. if you want anything else from me, you’ll find me at the bar in Ponderosa.”

Sarah says:
The last few hours of a thirty-nine day experience are momentous, nerve-wracking, heart-breaking and triumphant all at once. Under the jurors’ gaze, the finalists might not have the security to express their true feelings at Final Tribal Council. Luckily for them and us, Gabby will express the emotions for them. She’ll still drill down on the technical points of their strategic game, mind you, but she’ll do it with a graceful tear.

Logan says:
Probst may be regretting his decision to forbid individual jury speeches anymore because Christian will have A LOT to say. It would’ve been the record for longest jury speech of all-time. A Reuben sandwich would be his first choice followed by that robot in his bedroom in the shape of Kelly LeBrock.

Sarah says:
You’re probably not going to notice Alison among the louder personalities of the jury, but head to Twitter the day after, and her contribution—distilled down to gif form—is going to be your go-to finale moment.

Logan says:
Davie is wanting this to be an emotionless game. He preaches about respecting whoever takes power to eliminate another player. Whoever he feels is responsible for his elimination will likely get his vote. . .but isn’t he super close to Nick which may overwrite any strategic success of another player? He denied rewards to Angelina so I assume she is at the bottom of his list.

He is going to love being on the jury with the mayor of Slam Town.

Sarah says:
An endurance queen, Kara will spend the hours of Final Tribal Council being smothered by Dan yet still have a smile on her face when casting her vote.

Logan says:
He’s a writer and doesn’t take things seriously. Mike will vote for whoever he likes the most or whoever will be the most entertaining winner. I am curious to see how he balances this. Jabeni? Alison? Rockstar alliance? Mike has a lot of close bonds with the other five.

Sarah says:
Well, this is going to be awkward. The moment Nick addresses the finalists, each one of them is going to give him a knowing nod and say: “You and me, buddy, the Rock Stars / Dicks / Rice Negotiators…” Closely followed by: “What?! But… I thought we had something special!” In the final betrayal of the game, Nick is going to have to explain to some angry finalists why he can only vote for one of them. Expect his speech to be less a question and more, “It’s not you, it’s me.”

This season, we’ve found it harder than ever before to predict the jury’s views of the finalists, so it seems unlikely that this round of Jury Jeopardy will come down to a tie-breaker. Yet perhaps best not to presume that prediction is any more valid than my others. Instead we’ll say it’s a closer run vote than most, but still a decisive win: 6 – 4 – 0.

Comment with your own thoughts below or on Twitter. And don’t forget to check out everybody else’s predictions:

The Goliath – Austin Smith at Inside Survivor.

Thanks as always to Christine LaRiviere for the amazing Jury Jeopardy board. For more Survivor LEGO pictures, follow me on Instagram.