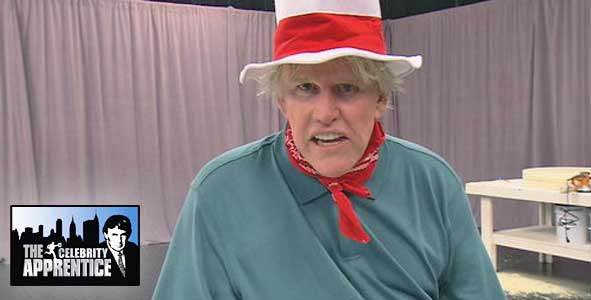 I’ll admit it; this episode was not very good.  No fights, boring task, no Piers Morgan. There was some craziness though, which leads to my week 2 MVP.

While this wasn’t Busey’s craziest episode ever on the Celebrity Apprentice, he was really the only player, with the slight exception of Ambassador Rodman, who entertained me throughout out these grueling two hours.  I’ve always thought that the Cat in the Hat is a pretty sketchy character, but at least he didn’t tickle the kids in the story.  The same can’t be said for Busey in the Hat.  He tickled the kids, the adults, and the executives while calling himself the tickle monster.  I think a more appropriate nickname would have been Buffalo Bill.  As he explained how to most successfully tickle someone under their ribs, I got an ‘It-puts-the-lotion-on-the-skin’ vibe.  As I sat there, eating some liver with some fava beans and a nice chianti, I couldn’t help but think that GARY stands for Groping At Random Youths.

Of course we also got his typical weird faces and sound effects.  I love when he uses expressions that nobody else understands such as “just as simple as making soup” and “fun comes with dinner when you’re working with me.”  There was also that scene where he couldn’t figure out how to use the camera.  I bet Rudy Boesch wishes that Busey competed in the video camera challenge on Survivor: Borneo.  Rudy may not have known the answers to any of the trivia questions, but at least he was able to work the camera.  I also bet that Rudy does not watch the Celebrity Apprentice.

FUN = Finally Understanding Nothing.  No wonder Gary Busey seems to have so much fun on these tasks.

The Donald fired the right person this week.  Not only has Dee Snider done nothing memorable since ‘7-UP RETRO, STILL KEEPING IT REAL’, his cardboard cutout idea was potentially one of the worst in the history of the show.  I can’t give Trump too much credit though because it was such an obvious choice.

We get it dude, you own a plane.

It was good to see the Trump boys back, but besides their matching haircuts and outfits, it wasn’t a great episode for them.  Donnie Douche wasn’t douchey enough and Eric really didn’t say anything.

At one point Donald asked if he should comb his hair like Eric.  Personally I think he should take page out of the Cesternino playbook and shave his head.