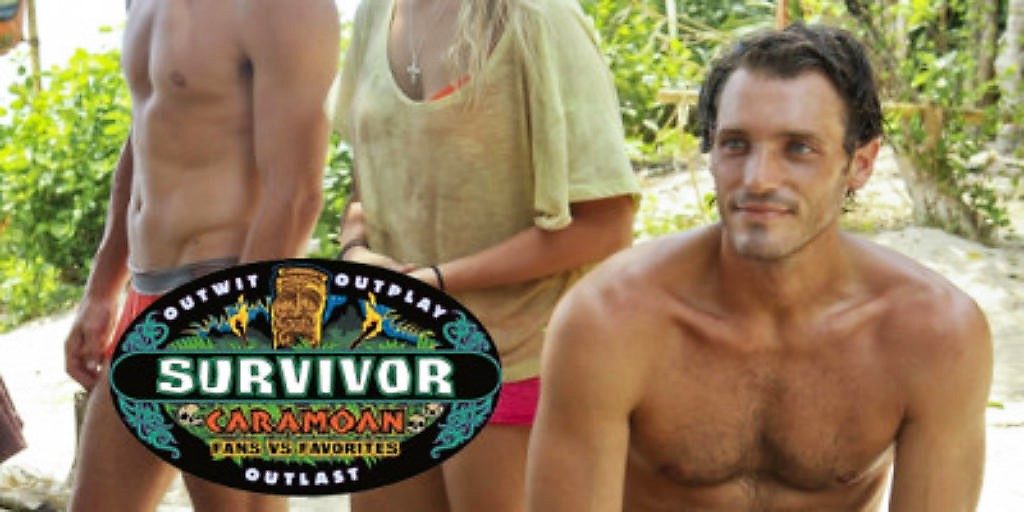 “As a fan of the game,” Reynold Toepfer says in a confessional seconds before finding the hidden immunity idol, and I almost spit out my Lindemans Framboise (shut up it’s delicious) when I hear this, I have to stop everything right there, because this is the same guy who just a few days earlier told Gordon Holmes, “I was recruited … just off the street. It was one of those LA stories,” so that whole “fan of the game” thing doesn’t feel right, right?

Ah, man. Add that to the list of reasons why Reynold confuses the Shamar out of me. I don’t know what to make of you yet, Reynold. And I’d like to try to fix that. So let’s go, you and me. Take that bulge out of your pocket and join me in The Wiggle Room.

WHEN IS A FAN NOT A FAN?

Moments before the Fan-filled Gota tribe heads to tribal council, Laura Alexander confesses, “Allie is a strategic threat. I think she’s the only one out of the four pretty people that’s really thinking.” Is she right? We can’t judge Hope yet; we’ve barely seen her. We can judge Eddie; it appears he’s arrived at “sexy ladies + sexy dudes = $1,000,000.00,” and we don’t need a calculator to know that math’s no good.

But what of Reynold? Is the icy-eyed dream-boat at the head of the Cool Kids Alliance thinking with his head — the right head, at least?

Confession-time: Reynold and I have history, even if he doesn’t know it. When I kicked off the Reynold portion of the RHAP bloggers’ round-table discussion of the Fans, I identified him as a snooze without the killer instinct to win the game. With the exception of Decoding The Edit blogger Michael, it seemed I was the only person who didn’t see greatness in Reynold. What was I missing? Why did everyone see greatness where I only saw the personification of a nap?

A few days later, a notification arrived in my inbox to inform me that Reynold was following me on Twitter, and that made me nervous, because I’m a 5’6″ chubby 14-year-old-looking 28-year-old whose first and only fist-fight was a cowardly punch thrown at my best friend during the last night of summer camp when we were 13, and pre-game smack-talk aside, even I would readily acknowledge that Reynold could rip my face off using only his eyes, Cyclops-style. How on Earth could I possibly give this guy an honest assessment with his lethal-laser gaze aimed directly at my goofy Noomi Rapace avatar? I’m a blogger, not a fighter!

For a brief moment, I thought my problem was solved when Reynold kicked all of the ass in the opening challenge of Survivor: Caramoan – Fans Vs. Favorites; despite losing to Malcolm, Reynold put forth a valiant, Olympian-level effort that made an enormous impression on me. Finally, I saw value in the guy: he’s a challenge beast, and I love challenge beasts, so maybe I could get on board with Reynold after all. I even tweeted at him about my change-of-heart.

But I tweeted too soon.

There’s no denying that Reynold is a strong competitor. He’s proven himself invaluable in all three of the challenges he’s performed in so far, and that should keep him in the game for a while yet. There is also no denying that Reynold has an idol. That buys him at least three more days of life on the island — assuming he doesn’t Ozzy the op.

My opinion of Reynold has indeed changed since my pre-season analysis. I no longer think he is a bore. I think he’s fascinating. He has so many of the skills needed to do well on Survivor — athleticism, charm, intelligence, a bulge in his pants that says “can’t touch this” — but for such a talented player on paper, he’s putting those skills together with all the finesse of a prom king that never amounted to anything else in his life.

But it’s not over yet. It’s day five. Reynold has an idol. He still has a tribe that needs his strength and ability. If Reynold can get back in his tribe’s good graces — might I suggest offering up the head of Hope Driskill as a show of good faith? — and if he figures out how to use that idol to his advantage — there are more ways to use it than playing it at the next council; he can try a rallying call ala Marty Piombo in Nicaragua, for instance, though it might be a bit late for that — then I think Reynold can go deep in the game.

Reynold, I know it doesn’t sound like it, but I’m hard on you because I like your potential. I think you can do well in this game. But it’s do or die time: prove me wrong and the RHAP blogger majority right, or biff it on the bar I set so low in my pre-game analysis. As Olmec says, the choices are yours, and yours alone. Good luck.

(Also, Reynold, if you’re really reading this? All of the bad stuff I said? Disregard it. You’re the best!)

— I don’t want to let Laura off the hook here. Laura, you haven’t been reading your Spider-Man, have you? Heed the words of Uncle Ben: “With great power comes great responsibility.” If you’re going to call an idol out at tribal council, call it out. Don’t float it out there and run away when it comes time to shoot your target. If you’re not going to shoot your target, put the gun away and save the stick-’em-up for later, when you have some post-tribal alone time with Reynold, to create a new ally with a shiny idol in his pocket. (No, he’s not just happy to see you.) Maybe that would’ve backfired. But it would’ve been a stronger move than lobbing the ball in the air and not even taking a swing. The way you handled the information that only you possessed was absolute amateur hour. It was the biggest blunder of the entire episode.

— Okay, let’s rewind. “I’ve got to get a grip on my emotions,” Dawn says after her fiery confrontation with Brandon Hantz. “I don’t want to be around everyone crying.” I always wonder about crying on Survivor. I myself can be a bit of a crybaby (the aforementioned 5’6″ chubby 14-year-old-looking 28-year-old said to the awestruck readers of RHAP), so all that emotional action — the Brandon rants, the Shamar shuddups — would get all of the somethings in my eyes right quick. How can you keep those tears in check? If you’re Dawn, you don’t; you can’t. But Dawn 2.0 won’t let the others see her tears, not yet, at least. Tom Hanks would probably say otherwise, but there is crying on Survivor (my second League of their Own reference in two columns; it’s almost a trend!) — but you need to do it privately, or in if it’s in public, make a show of it, like Sophie’s tearful tribal council towards the end of South Pacific. It’s about knowing when and where to let it all out. The explosion with Brandon, in front of the rest of the Favorites, is not an ideal time to reveal you’re not worthy of the name True Grit. So good on Dawn for pausing the action and giving herself some Meehan-time; just another sign that this is a brand-new, better-built version of an old favorite.

— “One of the more frightening things about Brandon’s personality is that he has these moments of extreme rage, and they’re almost immediately followed by unbelievable pleasantness; it’s the sort of behavior befitting a murderer.” Cochran’s on-the-nose assessment of the revengeful Brandon says everything you need to hear about why Little Hantz should not have been invited back to Survivor. Brandon’s threat to pee in the rice and beans in the preview for next week’s episode is just the urine on the cake.

— That said, without Brandon, we wouldn’t be able to refer to Phillip as “Special Agent Pink Panther,” nor would we know that Brandon is, in Phillip’s eyes, “narsistic.” Priceless.

— On the topic of “narsissts,” let’s look at Phillip — or, more to the point, his “Enforcer.” We’re not seeing nearly enough Malcolm this season. What we are seeing, though, is very, very good. Totally fair choke-artist allegations aside, there’s at least one area of the game where Malcolm is the specialist: The Specialist. Watch the sit-down between Phillip and Brandon again. At the end of the conversation, Malcolm is sitting there as well, just hanging. Watch Malcolm lift Phillip in the air at the end of the immunity challenge, roaring, “The Specialist! The Specialist!” Watch them go for a walk on the beach, just the two of them, just like Boston Rob and Phillip used to do. Shep believes himself to be the group’s Alpha-Bostonian. Not so. Malcolm’s sitting in the beta seat, but make no mistake about it: he is Boston-Robbing Phillip, and it’s a beautiful thing. If Malcolm doesn’t hang himself if the Stealth-R-Us thing goes on too long, he’ll be in good shape. (And no, I’m not even getting into Phillip’s fourth-wall-breaking display of lunacy; Glenn took care of that for all of us.)

— Michael’s “huge reaction” to seeing the Francesca-free Favorites for the first time: “They came to play. They are vicious people, I can tell. She was first off in her other season and they sent her off first again. No mercy.” I loved that. It’s as spot-on an assessment as you can get in Survivor. It also speaks to something that Rob posed to Stephen during this week’s Know-It-Alls: you can’t undervalue the signals you send to your rivals. Cutting Allie loose instead of Shamar says very little; for the people who don’t know her, she’s just one of a bottomless bowl of blondes. On the flip side, cutting a challenge powerhouse like Shamar this early on would spell out that there’s more trouble on Gota beach than there is in River City. (That’s a capital “T” and that rhymes with “P” and that stands for “pool,” y’all.) Any move the Favorites could’ve made during their first date with Jeff would have made a statement, but Michael is absolutely right: the message sent by sending the first-boot home first again is something to the effect of, “Hope you’re having fun, lunch-meat; we’ll see you real soon.”

— Here’s what I’ll say about Shamar, and then I’ll go away: I love this guy. I love the sight of this big, bad behemoth of a man rolling around the Gota shelter shouting SHUDDUP at anyone audacious enough to approach or disagree. I’ll also say this: with that attitude, there is no chance Shamar can win this game. He might make it to the end if Sherri or someone else drags him there, but he has no shot at the million. In more explicit and familiar terms, if Shamar wins Survivor: Caramoan – Fans Vs. Favorites, I will eat this rock.

That’s all for this edition of The Wiggle Room. As always, leave a comment down below or tweet your thoughts my way @roundhoward (like Ron Howard but rounder) and I’ll see you next week!