Richie Glanzer will be writing a blog all season long for Rob Has a Website as we continue to cover “Survivor: One World” from every conceivable angle. Click Here to Read more About Rich

You remember when you were a kid, and you used to blow your birthday candles out, but there was always that one that no matter how hard you blew, never would go out? Turns out the candle was actually a torch and the torch’s name was Christina Cha.

How the hell is she still in the game?? No reason to wait, lets go to the hero. 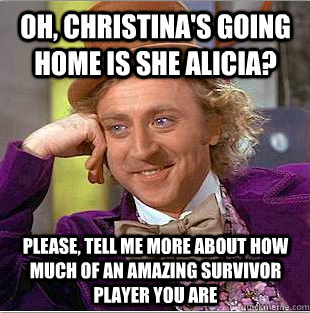 Richie’s Heel will be another Survivor, but the biggest loser could be the phrase, “Stick a fork in her, she’s done” because Christina has killed that phrase. I’ve put a fork in her after many episodes, but she keeps coming back. In all my years of watching Survivor, there has never, and I do mean never, been an instance where I was positive of the result pre-merge before the show aired. Christina was blindsided when Monica got blindsided. She was the only one alive who wasn’t in on the joke.

With three eliminations left to the typical merge and with her tribe possibly the weakest tribe ever to play Survivor, there was a 99% chance she was going home. This week. And of course I wasn’t the only one who thought that way. Colton knew she needed divine intervention. “If by some miraculous miracle you did make it to the merge, you’re the first one to go. Like, you’re going before any guys ,you’re going before any girls. (turns to Alicia) I mean is that not the truth?” Alicia also taunted Christina, “Game over girl. You cannot play this game. Game over. You cannot play this game.”

And it was over. The Peasants never were gonna beat the Greek Gods in the next challenge and there was even less of a chance that Jonas or Leif would grow a pair and blindside Alicia. I give credit to Christina for not giving up and attempting to set the pair straight. She told them, “Well here’s the thing. Alicia already has an alliance with the four girls over there. And if you guys wanna win the game, you (have to) vote Alicia out.  I’m not part of that alliance, obviously because if there’s a merge, Alicia will go with Kim, Chelsea, Sabrina and Kat. As you know, this game is a numbers game.”

But common sense wasn’t going to save Christina. Leif and Jonas were so far gone, Christina needed a miracle. A divine miracle.

***And somewhere, Coach and Brandon got together, got on one knee and begged God to smite Colton. Reportedly, Coach told God, “Looooord, I’ve played this game the right way three times. I’ve yet to lie. Please take Colton’s appendix, mush it all up and smite him. SMITE HIM!!!!”

And so did the smiting, as Colton Cumbie turned into Colton Crumbled.

We know the rest, he’s out and now it’s a new game. Christina is in great shape. She has to convince Mike, Jay, and Troyzan to not vote with the girls in the Greek God alliance, and instead make it a battle of the sexes, and bring her along. If she can do that, she can absolutely win this game because all the girls should realize she didn’t turn on them, since they never took her in, in the first place.

Kinda obvious, no?  She gets my heel not just because she went from one of the most powerful players in the game, who could choose between two alliances, to now being a prime candidate for Christina and the men to vote her out next. It would be the perfect move for Mike, Troyzan and Jay to make since then they still could choose which alliance to stay loyal to. The Greek Gods or the men. Outside of Colton, I’ve yet to see great game-play, but with him gone that should open things up a bit. If I were one of the guys on the Greek Gods, I would absolutely leave my current tribe and go with Christina, back to the men.

I’m absolutely devastated. I wanted to see how this thing played out. Don’t get me wrong, Colton was an absolute bully who deserved everything he got. Had I been Christina, I would have danced all over his crumpled body… but what’s unfortunate is Colton never was humbled. He will go to his grave thinking he would have won Survivor and was one of the most dominant players ever and he has every right to think that, since he was. But the man needed to be humbled, and he wasn’t. All we can hope for is he was humiliated by his bullying and becomes a better person. After seeing what he did to Christina, I now don’t think he could have got the jury votes to win, because he probably would have acted like a big jerk to all the people he eliminated. Though to be fair, he probably assumed Christina wasn’t going to be on the jury, so he may have acted differently towards people he evicted that would later vote on the jury. We will never know.

I’ve seen a lot of people rooting for Jonas and thinking eventually he would be the one to blindside Colton.  After Colton left Jonas said, “I’m ready to take the bull by the horns and let myself be the ringleader.”

Jonas was never gonna blindside Colton. He didn’t have the sack to do it. Christina laid out the perfect plan for him to blindside Alicia, and I don’t think for one minute that him or Leif would have done it. He seems like a nice guy, but I doubt he will be a decision maker going forward. In almost every battle of the sexes I’m the guy rooting for the guys. Not this time. I’m hoping Christina, Sabrina, or Kat wins.

Yes, I’m a Kat fan. While losing Colton the way we lost him sucks, I’m with Kat. I don’t want that appendix thing either.

***Remember in the above article where I put the three stars? Yeah, what was inside those three stars didn’t really happen. I mean it may have, but if it did it was just an educated guess. Coach and Brandon rarely let me into their praying sessions.***

My Dad died in 1998. Its weird what reminds me of him but when I was real little we’d either watch old horror movies starring Bela Lugosi, or some dark British film. When Alicia was petting Colton’s head, it was as scary as a Bela Lugosi film, and as dark as those old British flicks. Really creepy and sorta incestual in some way. Ewww.

Lastly, as vile as Colton was, he sure did showcase the huge amounts of class from Bill and Christina. They both are better people than me. I would have ripped the kid’s head off.