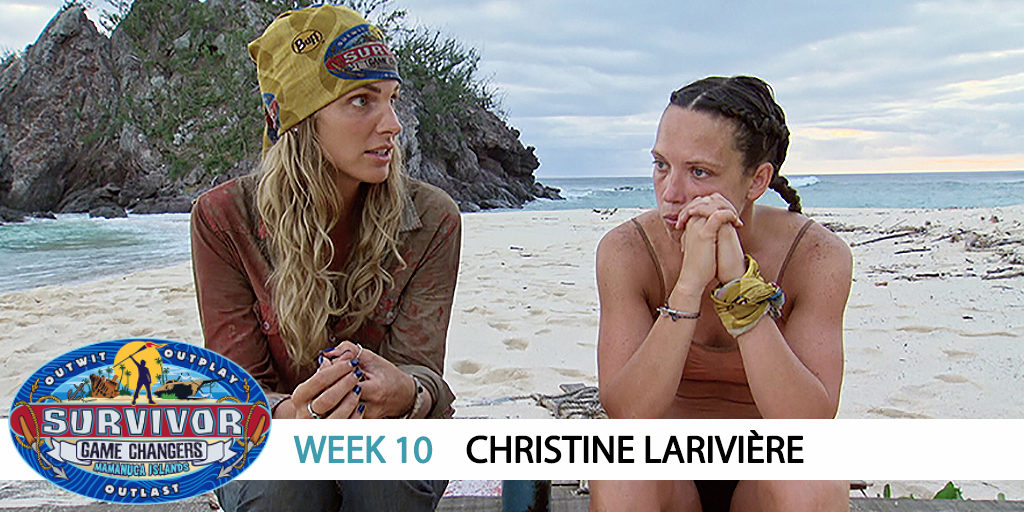 Scott will not be writing a recap for the next three weeks, so welcome back to Casual Survivor, the Recap Edition, the blog in which I touch upon the viewpoints of comment writers who fall into stereotypical groups while recapping the episode. This week, we have the coveted family visit and the bizarre behavior of people who have not seen their loved ones for a few weeks. I can’t wait for the blubbering mess!

We get our clues for where this episode is headed: a full moon was rising which is a classic “girl power” symbol signaling a new queen will be crowned. Jeff said, “The minority was hopeless…and desperate” as the camera panned in on Fan Favorite Sierra Dawn Thomas. Although Cirie was instrumental in putting all of the wheels into motion, the camera focused on a pissed-off Andrea as if to say she is the reigning queen and responsible for the former majority becoming the minority.

Tai asked Andrea if she would talk about what happened and she refused. The Reign of Terror is brewing. Openly targeting Tai never works out well for anyone. It caused Queen Sandra’s demise and this will be the beginning of the end for Andrea.

You Got to Have Friends

Cirie, the mastermind, decided that a couple needs to be broken up: Brad and Sierra. The plot thickens.

In the next scene, we have a lone tree hanging on for dear life as the world turns with speed photography. Then, boom, we are with Sierra and Sarah having a tête-à-tête in which Sierra revealed her terminal illness in Survivor, wanting a true girlfriend and confidante. She then informed Sarah that she would be bequeathed with everything Sierra owns, her loyalty and the Legacy Advantage, in hopes of tying the knot of sisterhood with Sarah.

Just like that, they are besties and most fans are shaking their heads. When did Sierra develop amnesia and forget that you should not share that information? There are no friends in Survivor –only people you pass time with. Mark Burnett set the show up to see what people are willing to do to get ahead, not how deep the bonds of friendship run.

Jeff announced that they were playing for an American BBQ: burgers, hotdogs, cupcakes, and loved ones. I won’t comment on the nutritional value of that reward and the obsession with protein and sugar in the American diet for fear it will lead back to the goat dilemma earlier in the season.

As soon as family was mentioned, Sarah dropped to her knees then curled up into a fetal position or prostrated. It was like watching David Byrne in “Once in a Lifetime” only less cool and somewhat pathetic. Sarah either had a religious moment in which the holy spirit entered her, suffered from food poisoning, or caught a case of overacting.

Each season, one person usually kicks into emotional overdrive. This season, Sarah stepped up to assume the camera hog award for the best performance. Last season, Ken reminded us how much his daughter meant to him and then his brother appeared which provided no context for why Ken would have spit on his lip when he was not chosen for the family visit.

This episode caused casuals to foam at the mouth with spit left on their lips.

Archetype: Judge Not Lest Ye Be Deemed a Troll

These are actual quotes of my favorites from the family visit.

“Spouses I totally get, maybe even kids. But if as an adult if you can’t go 30 days not seeing a sibling or parent without turning into a blubbering mess, you may have dependency issues.”

This led to an entire discussion about whether serving one’s country or Survivor is harder. Are we seriously comparing emotional stress on a reality show game that people have played before to warfare or living in a war zone?

“Sickening! It’s like watching “Queen for a Day”….poor me, boo-hoo! I haven’t seen my family for 28 pathetic days! Fake tears and fake emotions….all for the sake of the losers on the jury!”

I highly recommend this thread which results in an argument about the jury not seeing how people react to their family members’ appearance which led the original poster to fire back:

“Sure they do. It’s videotaped and presented to them for evaluation and discussion while they await the final show. See…unless you are there…you don’t really know!”

On a strategy thread, there were these:

“Tai, Mikayla, and Tarzan should all work together to final 3. Let the judges vote.”

“Originally wasn’t a fan of Cirie. I love her now, once her personality emerged. I loved seeing her with her son. What a handsome kid! I loved seeing their bond! Super glad Michaela and Tai voted with Cirie’s group. !!!! If they had gone with Brads, they’d just be at the bottom of that alliance!”

with hopes that players will be triggered enough to give Emmy-worthy performances.

Jeff, sensing that Sarah would go full Sherri Biethman in a moment, let Sarah see her husband Wyatt first. As Sarah went back to join the others, it happened.

“Dammmmmmmmmn. He’s sexy, Sarah.” –words no woman wants to hear from a tall, blonde drink of water who happens to be a fan favorite and the sheriff. The camera shied away from Sarah and focused on Tai and Wyatt smiling and waving to each other. With a name like Wyatt, it’s no wonder Sheriff Sierra and Officer Sarah like him. Earp.

Here’s Sarah’s moment to let her husband know how much he means to her, via overacting, and her new BFFFFSSDT verbally acknowledges that Wyatt is hot while Tai goes full-on coquettish. Cue the slow-motion version of the Milky Way revolving because the sun will not set this evening although it will appear that way, but rather Sarah’s world will turn—big time.

The next time the camera focused on Sarah, Sierra’s father was talking about how people try to tear you down in life, but you must build yourself back up. Way to bring us down, Fan Favorite Father. In this second Thomas family Hail Mary moment (third if you count JT), Sarah has the seed planted in her head to tear down Sierra and recalls the first Hail Mary moment to reap the spoils of Sierra’s willed legacy to build herself up. After all, it’s justified. Sierra broke the girl code by making Sarah think she lusted after her man. Sarah owes her nothing. Sierra and Sarah slapped each other five with Sarah appearing a bit reluctant. The seed has roots already firmly planted…

As Monica Culpepper, the M in WWMD, or the Me in We at the Culpepper mansion, hugged Brad and he sang her praises, Sarah looked on. What would Monica do if someone besides Shane Powers called Brad sexy? She’d cut a bitch because she’s a neat lady and that’s what they do.

The rest of the survivors saw their loved ones which can best be summarized by this:

The players eventually battled it out on teams where they had to dig in the sand and crawl through an obstacle course. I expected to hear: “You’ve got to dig, woman”, but instead Jeff praised Brad’s performance. Brad has probably spent his lifetime winning stuffed animals for Monica at carnivals and it finally paid off.

Call the Whambulance (A Careless Whimper)

Michaela kicked a harmless box just to demonstrate how angry she was about losing the challenge. Her mother immediately chastised her which indicated that she might not be the best choice to take to a barbecue, lest the whole scene become awkward for everyone else with Michaela’s mom telling her to eat slowly and mind her manners.

Brad, Andrea, and Aubry won and chose Cirie and Sarah to join them for a family barbecue. Once again this caused pitiful displays of desperation which may have been more for the lost opportunity of cupcakes and burgers than Greg and Peter Brady sharing a moment.

Cirie must have had flashbacks of Aras crying about not seeing his mother as Michaela pitched her fit, so she wisely reminded everyone that she knows how much it means to them and she feels sad. Andrea should have asked WWMD—What would Michaela do? —once she saw that Michaela was mad enough to spit like Dawn, but she probably feared Cirie would cry all day if she did not spend time with her son whose graduation she missed and Sarah might vote with Brad. Tough situation.

During the actual grilling of the meat, Monica tells Brad that Michaela could be flipped as she flips a burger. There’s some parallel universe relationship between Monica and Michaela because Monica singles her out as a flipper and later we have Michaela’s profound flipping of the “W” in “We” to become an “M” forming “Me”. The problem is the “e” would also flip forming a backward schwa, so really, it sounds more like muh which leaves me feeling meh about the whole spiel at tribal council. Maybe she capitalized both letters? …

If we are to fully appreciate Michaela’s sage words, however, “We” becomes “Me” in the Hall of Mirrors and WWMD, “What Would Monica Do?”, becomes MMWD, “Millennial Michaela Would Dramatize.” Michaela really has been pandering to the cameras as she has sipped tea, eaten popcorn, cried, kicked a box, and thrown a tantrum– all apparently for notoriety since it has not helped her game a bit.

Next week on Survivor, our Anti-Monica does the unthinkable– she argues with Brad who kicks sand because there are no boxes to be found.

Before tribal council, there is a giant, fiery ball of orange setting as if to say the men’s alliance would suffer a burning defeat or the old regiment would fall — or it was just very pretty. One thing was for sure, Sarah’s world was turned completely at that family visit. At tribal council, we learned that Sarah was able to flip both Tai and Michaela because prior to tribal council, Sarah told Michaela that Sierra had a sort of idol. By the end of the episode, as Sierra left defeated, the camera cut to Sarah’s face, the face of our new sheriff/queen after her showdown at OK Corral in Tombstone, looking pissed toward the others as Andrea nervously glanced about.

Some would say the look was to ensure that Sierra would still bequeath her advantage to Sarah. Others would say it was a warning shot meant for Tai for flirting with her husband as if to say, “You’re next, bitch.” Officer Sarah takes no prisoners, but she might tamper with evidence to get ahead. Be careful.

Sarah truly is playing more like Tony Vlachos but with less frenzy. Right now, she has the Legacy Advantage and the Vote Stealer. What she is lacking is a loyal posse, but perhaps she will be able to drag Troyzan, Tai, or Michaela along with her. Unlike Tony, I’m not sure her bad cop game has jurors viewing her as likable. Then again, Debbie is pretty unstable, so how much influence could she have on others?

Which player do you think will go next? Let me know in the comments.