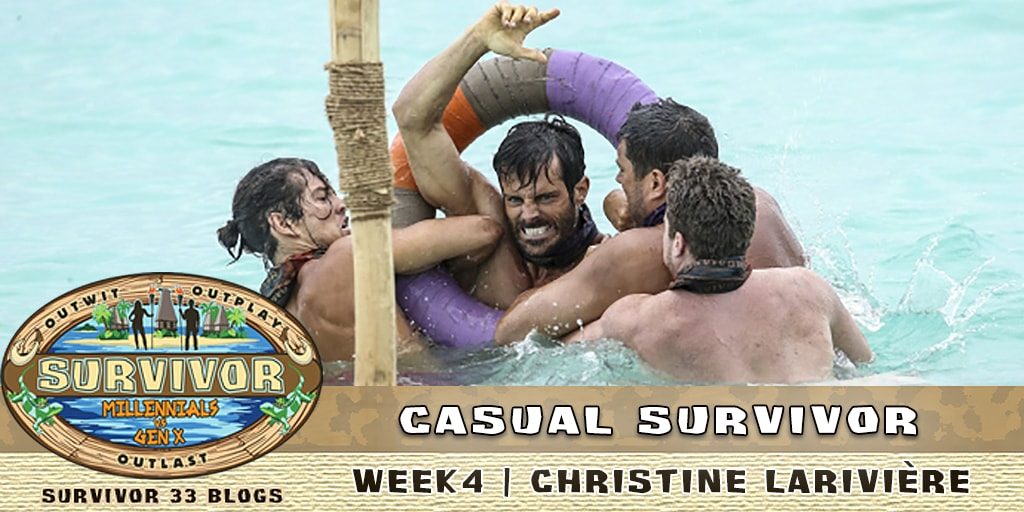 Welcome back to Casual Survivor, a blog in which I examine posts from the casual contingency of fans and paraphrase their thoughts according to the overarching theme of the comments. Social media for Survivor runs the gamut from comments discussing the minutia of the edit to the very confused. The players themselves were active on social media and even Purple Lucy made her debut.

Comments were few and far between for our “Tiger Mom”, Lucy. Little did the casual viewers know but she (Jade Fox) was working with Chris to steal David and Ken’s shared hidden immunity idol. When Ken (Mu Bai) offers to school Jessica (Jen) on deception in the game, Jessica runs back to Lucy and promises the immunity idol (which is so hidden that only two players know about it) simply because she trusts Lucy, and David (also Mu Bai) ends up playing his idol for her to save her. Lucy Fox dies but only after admitting that her goal was to vote out Jessica. Sometimes the title fits well–not this week perhaps, but how could I resist?

The show had something for everyone this week. There was a topless challenge participant, a ditzy decision, premature idol play, two angry men, a threat to dump the rice, a tribe straight out of Lord of the Flies, the Hulk, a dictator, a son’s devotion and love for his mother, a Hawaiian shirt, prayers for winning, creeping up on someone in the bushes, Will looking crazed, Cece shocked that her name was written down again, and Ken looking hot…really, really ridiculously hot.

Wake Me Up Before You Go-Go

Ken is so hot right now except that the faces he makes cannot help but remind one a bit of Derek Zoolander. In fact, much of the conversation on the Gen X tribe seemed straight out of Zoolander, albeit not in the correct sequence. (Perhaps the editors changed the sequence to detract us from figuring out how vapid it seems.)

Ken: Earth to Jessica, Lucy’s writing your name down.

Jessica: Earth to Ken, no, she’s not.

Ken: Earth to Jessica, duh, she is.

Jessica: Earth to Lucy, Ken says you want to vote me out and he’s voting for you.

Lucy: Earth to Chris, Ken is writing my name.

Chris: Of course she’s heard of allies. She blindsided them all.

Cut to the Reward Challenge.

It was a bizarre series of conversations!

The conversations from the Gen X tribe were rife with hypocrisy this week. Ken becomes “emotional” after Lucy tells him whom he can and cannot talk to. Ken approaches Jessica. Being upset, he tells Jessica that if she does not vote with Ken, David, and Cece and flip Sunday, then she is going home. Basically, he orders her to flip Sunday in a tone similar to Lucy’s without the shrill pitch. A confused Jessica approaches Lucy to confirm what Ken has said since she considers Lucy an ally. Instead of fishing for information, Jessica places a target on Ken which is not a bad idea considering President for Life, Lucy, may order a convenient assassination and that puts Jessica back in favor with the junta on the island.

An “emotional” Lucy, “acting like a girl”, runs back to Chris and Bret. Bret’s reaction to hearing Ken is targeting Lucy can only be paraphrased as: “Wicked pissah. Irregahdless, let’s vote Jessica out. She doesn’t tuhrn right on red and I can’t take the pink eyes anymohre.” Chris declared he cannot stand Jessica. I’m starting to think flipping on Paul was a very smart move for her in retrospect coupled with a stroke of luck. She was at the very bottom. Strategically, it was not a good move, but it worked out well. While fans of strategy are calling her a dumb player, I would categorize her as a dumb luck player. She’ll always be remembered for flipping others and being saved…and the pink eyes.

While Gen X consisted of a dictator and Che Guevara looking good and ready to overthrow the regime as he works at camp, the Millennials started their Reign of Terror against the island goats but not the love-struck goats in the game. The goat hunters went looking for their sacrificial scapegoat since they want everyone to believe they are one big happy tribe and struggle with voting one another out. The crazy look in Will’s eyes says that once he smears the blood on his face and in his hair, the Gen Xers will beg for Paul and Lucy to return and the Millennials won’t know what hit them.

There are two different forms of government going on this season according to 37-year-old Dennis, a Briton: Lucy’s self-perpetuating autocracy and the Millennials’ anarcho-syndicalist commune. While the goat killers were away, however, Adam found Excalibur in a giant shell via a clue from the Lady of the Lake. With the rise of this new king, Ken will have another revolution to lead against those who exploit and who fail to say “please” and “thank you”, which must stop immediately.

Ken, the Leader of the GLC (Song by Kate Bush)

So what’s wrong with being really, really ridiculously good looking and helping people who need help? Nothing if your name is Ken. Ken has his many looks that are winning over viewers: the “We’re compadres look” he gave to David when they formed an alliance, the “I’m not a Ken doll. I have a penis.” shirtless look of disgust as Cece excitedly informed him that the Millennials liked him, and now the sad yet sincere “I expect everyone to believe me because I am a man of my word” stare.  Look at how Ken uses his prop to perfectly frame his face during competition in the featured photo for this blog.

Ken is building his modeling portfolio as this season airs. We’ve seen him smize (Tyra Banks reference to smiling through your eyes) as he is angry, happy, athletic, brooding, sincere, and confrontational. We may see Blue Steel if he makes the merge. I can see him starring in commercials in the future for organizations like Poets Without Shirts, People Who Still Text “You”, The Association of People Who Ask Nicely, and Men Who Back Up What They Say. I’d join three of them.

Not a week goes by without comments like these about Ken. Some even address him directly.

Ken looks like the handsome actor from Mad Men.

Some of the comments praise Ken as playing a great game.

I especially loved one from a middle-aged woman (not me I swear) who likened herself to Ken and spoke directly to him. He is a fan favorite as are Adam after that confessional in addition to David and Jessica. Casual fans still like Jessica, but even on Lucy’s vote-off thread, Lucy remained purple with only a handful of hate-filled comments. There were a good number of fans who disagreed with David’s move, however, most loved it and one stated that Jessica should now become a slave to David, Cece, and Ken. Ken voted for her and she voted for Cece, so expect some drama…or not… as they’re all mellow.

The time is upon us. Twenty contestants, thirty-nine days, a 45-minute puzzle challenge, three blindsides in a row…This is Casual Survivor…

The casual comments rivaled Rob and Stephen’s podcast this week on Survivor Know-It-Alls with acerbic content. While our beloved Know-It-Alls on RHAP saw dumb moves from Ken and Jessica as well as David, the casuals loved the episode and the majority seem to strategize three Survivor days at a time.

Do the players even watch the show? Lucy should have known not to be bossy because Paul was voted off for that. Lucy was voted off because an idol was played not because she was bossy. Her bossiness could have sent Ken home. Jessica was not bossy but received five votes, even one from Ken out of feeling betrayed and being bossed into voting that way.

David is so different. He’s no longer paranoid and playing to win. See all comments on websites devoted to discussing strategy.

How was Lucy in control? She only spoke for 10 seconds. Sometimes it is the quiet ones who run everything. In this case, 10 seconds was too much.

The Millennials cheated on the puzzle. The girl got the answer from her tribe. This sounds like something I might write if they looked at the Gen X’s puzzle, so no comment.

Who are the other people? They don’t get any time. Which people besides the key players for the story each week get all of the time? Unlike seasons with Boston Rob, Coach, Ozzy, Phillip, and a Hantz, we are getting to see characters involved in the plot surrounding the vote each week. Will, Cece, and Sunday do not have much development, but they are portrayed as loyal sidekicks. Bret and Chris are the guys who can’t grab onto the reins as the horse gallops wildly away.

I can’t get into the show this season. Then how are you into comments on the show? Stop the negativity. You can’t be a Know-It-All and be so negative!

Please vote Lucy out. (Written on Thursday…Let’s hope she’s a foreign viewer.) Sigh. Even I had watched the show by then.

It was a great reward challenge, a new immunity challenge, and an exciting Tribal Council. My husband started cheering with me. It was a freaking puzzle! How is that really new except that three people could work on it and it took forever to solve? Having said that, it was a fun show. I loved every moment of it.

There were a few comments about Lucy’s dictatorship reminding them of a certain North Korean. Earth to Americans, have you seen our presidential candidates?

Finally, some deep thoughts to ponder…

If whoever writes ‘Figgy’ goes home, then what happens if Figgy writes her own name? The response to this read like: “Earth to guy above me, she can’t vote for herself. It’s against the rules.” Followed by: “Earth to guy between my posts, I know. I was joking.”

Never Say Never (It works for both generations, but the Romeo Void song is better)

And this brings us back full circle.

At the end of the film, Jen jumps off of a cliff. Jessica has done this already and she might have taken her game with her. The tribe swap may save her, but should she land on a tribe with Sunday, Bret and Chris, depending on which Millennials are present, she may be on the outs again. Jay sure seems to love Chris, so with Michelle becoming introspective, he may need a good bromance. The idol hunt should give David a slight edge since he knows they are common objects.

It should be interesting to see how the tribes line up. Everyone might get a fair shot since the majority alliances have cracks. No one needs to give up hope yet. I was not sure if the production team is foreshadowing a slaughter of goats in upcoming episodes led by crazy-eyed Will of all people, but I could understand his turning on Taylor and Figgy. In any case, Sia will not be giving money to anyone except maybe Ken for educating everyone about walking sticks or Adam for not joining the group.

I am excited about the unpredictability this season. I like the cast and am happy to see attempts at preserving alliances even if the collateral damage is great. Which players are you cheering for? Is Ken revolutionizing the perception of male models worldwide? Will he forgive David? Will Jessica’s eyes get better or do they give her a special power of making bad decisions that kill others’ chances? What must Cece be thinking? Let me know in the comments and thanks for reading.