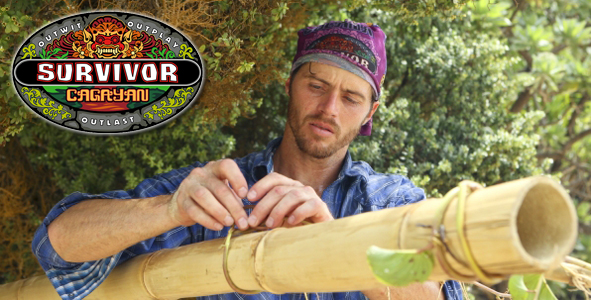 Confessional of the night: “Today is definitely beautiful on the beautiful tribe. But there’s a lot of people playing dumb out here and I’m onto it. Alexis is just being the flirt out here. Just kind of like, you know, definitely all about her sexuality and always in her panties. Kind of like, you know, ‘You want some coconut water?’ So I definitely kind of see her game. Jefra on the other hand, I don’t know what her game is. All of her crayons in the crayon box aren’t bright.” – Brice

Did you read my preseason column on why the Survivors were cast? No. No? Screw you. OMG. I’m kidding! There’s no time to look back. We’re full steam ahead.

Michel spews venom on the edit.

Dan predicts how strategies will play out.

Sarah breaks down players to feverish details. [Editor’s note: Sarah’s column will be out tomorrow.]

And me? I hawk jest. Mat Karako summed my style up nicely by saying, “It’s kinda like reading someone having a mental breakdown.” Aw, thanks Mat! Let me know when I get to Level J’Tia and I’ll back off a little bit.

At times I’ll be lying to simply get humor across and others I’ll be sharing my actual opinion. You’ll never know which is which, so don’t bother trying to read between the lines; it’s tricky. Run DMC reference! You and your pointless references. 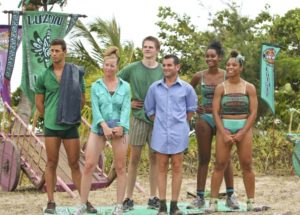 There’s one thing the game tells us that holds true for every season of Survivor. Here are four distinct examples that shed light on this one thing:

While we can all recognize that these are poor decisions, they don’t have to be for the example. It’s merely because early in the game, poor decisions tend to be more prominent than good ones.

David couldn’t help but be transparent with his gameplay. Not only does he make the decision to classify muscle bound Garrett as the weakest player, but he also gives an aggressive, scheming reason why. It was as though he thought the rest of his competitors were blind and deaf. It was a complete sign of bravado.

Kass also couldn’t help but be forthright with her gameplay. Kass was driven to tell J’Tia the truth by informing her she was on the outs. It was like Kass thought J’Tia was going to say, “Oh okay. That makes sense. Do you know if we get the same room at Ponderosa as when we started?”

Then there’s J’Tia. She resorted to sabotaging her tribemates’ food for reasons other than strategic gameplay. This is a clear indication of not being fit to play a game that involves emotions and competition. It’s like a two-year old throwing a temper tantrum without the compassion or knowledge of how to conduct themselves around other humans.

Lastly, there’s Garrett. There’s no excuse for holding an open forum before tribal council. It’s not only lazy, but also cold-hearted. Everyone knew J’Tia was the easy scapegoat, yet he had the want or need to put himself and the rest of his tribemates on pedestals with shovels in hand while J’Tia looked on from her grave. The inability or unwillingness to relate to other people cost him dearly.

While Survivor contestants’ beings should not be reduced to snippets of footage that takes place in a highly sociopathic environment, it’s clear what the game tells us: You are who you are.

Cool Cliff might not have caught any fish with his sidekick, Woo, but he’s reeling in his tribemates. He has charisma for bait and a big, steady, firm po— Okay, okay, a penis joke because he’s black. Whoa, Kass. Blunt much? Again, another black joke because— Hey, no, no, no. The first one was, but not the second. You’re lying. Maybe.

I’m not a fan of people who make fun of other peoples’ looks. So Lindsey can take her dirty dreadlocks and tattooed body elsewhere. Um, didn’t you just say— Yes, see how it comes across? Oh, I get it.

I like Sarah’s personality, accent and smile. That’s all you have for the eventual winner? Yes, for now and no, she won’t win.

By the way, don’t talk to the police. I’m not going to watch a 48-minute video on not talking to the police. Fine, but don’t say I never brought education into your life.

Everything about Tony was great. Did you see how he was afraid to touch the bottom of the lake after finding the idol? I thought that was cute.

What about #spyshack!? He’s a clown and I love it. I hope he continues to grace our screens with his child-like zest and innocence.

Woo-hoo. You know, like Yoo-hoo, but Woo-hoo. Get it? Yes, I get it. How stupid do you think I am? Well, you didn’t get my other— Oh, f*ck you. Hey! Watch your language. Children read this sh*t.

I don’t have anything to say about Woo-hoo other than I look forward to him and Cliff picking and rolling the rest of the competition. Psst, that was a basketball reference. STOP TELLING ME WHAT YOU’RE REFERENCING.

Oh David. Not only did you have weasel tattooed on your forehead, but you also went streaking while draped in neon lights. That’s quite the picture.

Lets put this myth to rest: Being a poker player does not mean you’ll be good at Survivor. They either overlook or lack the human relationship element of the game.

Therefore, the next time you see a poker player cast, fold them quicker than 7-2 off suit. Huh? Look it up. You told me not to explain anymore. How am I supposed to know poker terms? Oh my goodness. You’re like a woman. You keep going back and forth, back and forth. Excuse me?

You have to be a certain type of person to sabotage your tribe’s main source of food. Although I won’t lie, I found her confessional funny: “[laughing] This is what happens when you leave crazy people alone!” She’s nuts, folks. Nuts! It wasn’t funny. It was plain stupid.

You know what’s a phenomenal strategy for Survivor? Being completely blunt and honest with everyone.

How does she win court cases if she doesn’t lie? Does she only take on cases where her clients are 100% innocent? Maybe her clients are strictly babies. It would explain why she’s undefeated in all her hearings.

You had to stretch for that joke. Agreed.

I can’t figure out if Spencer is lucky or unlucky. Almost by default, he’s become the most likable and best player on a tribe full of ninnies.

Which makes me wonder, would you rather be in Spencer’s situation or Trish’s? Neither. I’d want to be somewhere in the middle of those two. That wasn’t an option. Whatever you say Garrett.

All I remember about Tasha is her whining about not being able to strategize. Nicely agree with Garrett and then go to work.

When there’s a tribe swap, I’ll be excited to see how she copes with running into more strategic dead ends. She got Kass to keep a self-diagnosed crazy person over a seemingly normal human being. I think she’ll be fine.

I would play coconut bocce with you any time, Alexis. You can giggle at my jokes and make me feel special. Then I’ll get voted out and cry myself to sleep.

Much like Tony, Brice was absolutely fantastic. Did you just make me say that in a gay voice? Maybe you have a little more flair in your genes than you realized.

Oh and I need to buy some purple pants. Um, speak for yourself. But no, straight guys shouldn’t wear purple pants. I’ll wear what I want to. I bet you snapped your fingers after saying that.

Jefra asked her tribemates about bowel movements; a fair question due to their much-altered diet. The question is: If Jeremiah flips, will she be the one swimming in her tribemates’ minimal excess waste? Gross! Too graphic.

Jeremiah finds one hot girl and a gay guy less annoying than two cute girls because Brice and Morgan aren’t bouncing off the coconut trees like young-ins Alexis and Jefra. Jeremiah would much rather see the bouncing coming from Morgan. Ha, that was funny. Hey-oh! Don’t ruin it.

LJ has solidified himself in his tribe with his seemingly humble and firm leadership. He’ll wrangle in country boy Jeremiah from smooth operator Brice and somewhat attractive Morgan.

The Morgan part was sarcasm. I was trying to switch things up. THANKS. I KNOW.

I could watch Morgan search for the hidden immunity idol for days. 39 days might be a little much, but a week would certainly be doable. Speaking of which, I wonder if the cameraman was thinking, “Oh come on, the tribe is back already? Give them a detour or something, Probst!”

First, why couldn’t it be a camerawoman? Second, you’re still disgusting.