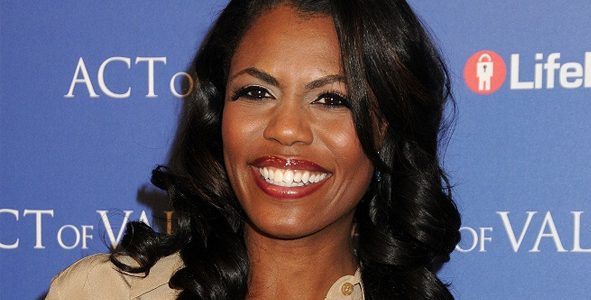 And we’re back!  It feels like yesterday that Aubrey O’Day was putting her vagina on the back of Arsenio Hall’s neck and Lisa Lampanelli was screaming “WHAT THE F LOU!”  Not only did the Celebrity Apprentice start on Sunday, but it’s an All Star cast of returning players.  Well at least some of them are stars.  I have no idea who Claudia Jordan is nor any recollection of her ever being on the Apprentice, but maybe she’ll surprise me like Aubrey did last season.  Just to recap what this blog will be about, I don’t really care who’s good in the tasks.  I like the contestants who fight and the ones that make me laugh.  I also tend to make Survivor references in order to keep the RHAP audience entertained.  Every episode I name an MVP.  This is typically the person who provided the most hilarity or conflict.

Although I believe that Bret Michaels taking Omarosa with his first pick in the draft will turn out to be a Vernon Gholston-like bust, she was more deserving of the MVP award than her fellow celebrities.  However, I put an asterisk on it because the real most valuable player was Piers Morgan.  According to the bylaws of this blog, only a contestant can win the award.

I was very skeptical when I found out that former Celebrity Apprentice winners would assist Trump in the boardroom this season.  The Trump kids, especially Donald Jr., aka Donnie Douche, have become some of the more entertaining characters on the show.  I didn’t want to lose the blatant sucking up to their father or Donnie Douche’s ridiculously nonsensical antics, but I now see what Trump’s plan was by inviting these former winners.  While obviously biased and unprofessional, Piers’ constant goading of Omarosa was the main source of conflict throughout the episode.  It started before the task when he sarcastically called her a delightful creature in her natural habitat, which caused Omarosa to start talking smack about his mama (I believe it’s called a ‘Mum’ in England).  Their bickering lasted throughout the episode until she was inexplicably not chosen by project manager Brande Roderick to come back with her to the boardroom.

While Piers was more responsible for continuing their feud from season 1, Omarosa had a good episode in her own right.  She manipulated her whole team, epecially Brande, with her shady accounting work.  I’d have to agree with Piers that Madoff would have been more trustworthy.  I don’t know why Team Power put someone who’s apparently the biggest villain in reality TV history in charge of keeping track of their donations.  Did anyone even think to ask Omarosa how much money she brought in?  It doesn’t matter.  She had her teammates so confused with how much each of them brought in that nobody, including Trump, thought to ask her about her own contributions.

Omarosa also pulled a classic Aubrey move from last season by volunteering Bret to be the first project manager before Brande ended up taking on the responsibility.  She was hell-bent on making sure Bret was the first one fired, and ended up getting her wish.  Tina Wesson finally has company in the Winner-to-Loser club.

The fact that a former winner was fired first isn’t the only connection to Survivor: All Stars.  We found out on Sunday that Donald Trump has something in common with Jenna Lewis, and I’m not talking about a sex tape.  Apparently, they share the philosophy that former winners need to go as soon as possible.  While Trump usually fires the person who adds the least to the show, which would have been Brande, he got rid of Bret because he has already won.  I’m not saying that Bret should win again, but firing him the first episode made no sense.  I sensed a budding rivalry forming between he and Omarosa, and rivalries with Omarosa typically become heated quickly.

While he made an error in who he fired, Trump was pretty funny this episode.  We were all thinking it, but he lived up to his dirty-old-man reputation when he said that Brande dropping to her knees must have been a pretty picture.  He seemed to be having a great time with all the meatball talk and continued his illogical love affair with Latoya Jackson.  It’s amazing how many times he’s asked her to come back on the Apprentice after finding out that she eats mouthfuls of garlic.  Maybe he has some kind of garlic breath fetish.

Donald, I love your show, but please never use ‘credibility’ and ‘The Celebrity Apprentice’ in the same sentence again.

Hopefully we see Donnie Douche back soon.  I wouldn’t mind seeing Eric either, but if Piers is any indication, the former winners will be just as good for the show’s entertainment value.