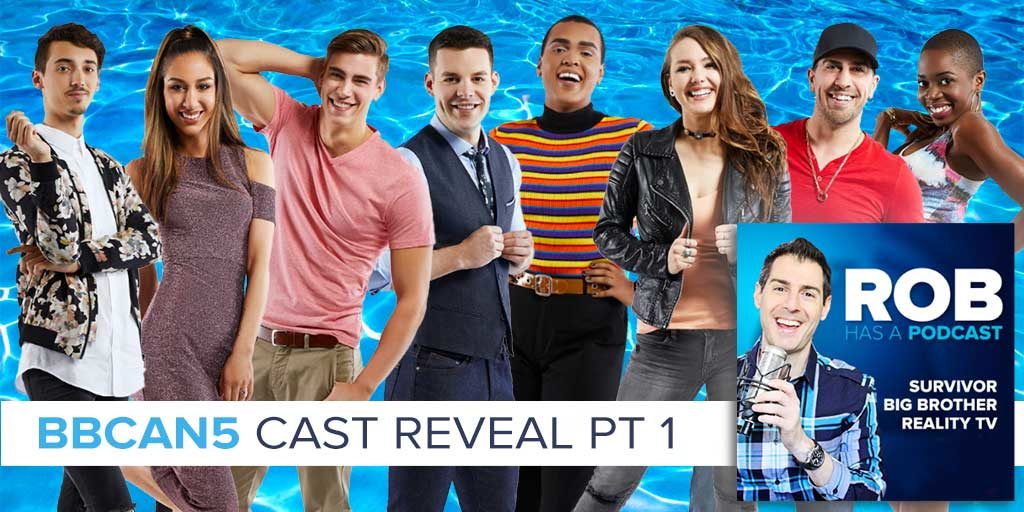 Rob Cesternino (@RobCesternino) interviews each of Big Brother Canada Season 5’s houseguests while in sequester.  Today the first group of 8 are being released.  The final group of houseguests will be revealed tomorrow and Rob will have interviews with them as well!

Vying for another shot at BBCAN victory, second chance Big Brother Canada houseguests are all after the ultimate redemption – a chance to re-write their history, and Canada has a front row seat! Second chance houseguests include: Gary Levy from Toronto, ON; Neda Kalantar from Vancouver, BC; Kevin Martin from Calgary, AB; and Bruno Ielo from Ottawa, ON. First time houseguests joining the returning players include: Andre “dre” Gwenaelle, a masters student from Montreal, QC; Mark Chrysler, a bartender from Edmonton, AB; William Laprise Desbiens, a Marketing student from Trois-Rivieres, QB; and Emily Hawkin, a bartender from Lindsay, ON.

Meet the first eight of this season’s 16 houseguests:

BBCAN background: The first runner up in the inaugural season of Big Brother Canada, Gary would have taken the BBCAN crown if fellow Season 1 houseguest, and his closest ally, Topaz hadn’t mistakenly voted for rival Jillian to win instead of him. Talk about misunderstanding the voting process!

Second chance strategy: “First and foremost, I’m going to reiterate the voting instructions when I get to the final two: ‘Houseguests, vote for the person you WANT to win!’”

BBCAN background: The victim of friendship gone wrong, Neda made it to the final three in Season 2 but her game was cut short by her closest friend in the BBCAN house, Jon, when he won the final HOH and evicted her in the finale.

Second chance strategy: “Last time I went in and laid low for the first few weeks. I can’t do that now. I have a reputation going in. I will cut anyone I need to cut this season and I won’t look back.”

Second chance strategy: “The first time I played I thought having good social game was just getting along with everyone, but it turned out to be a little shallow. This time I want to get to know people deeper on a personal level.”

BBCAN background: The first houseguest to win the Power of Veto during a triple eviction, Bruno lasted eight weeks without a single eviction nomination. But the father of two was ultimately evicted in a coup d’état twist that put him on the block and lead to his departure from the BBCAN house.

Second chance strategy: “I don’t have a set strategy. I need to meet everybody, see what they’re about, see the personalities, learn their strengths and weaknesses and use those against them.”

Brains, beauty and a sassy attitude make this Masters student a force to be reckoned with. But don’t mistake her lack of strategy for not being prepared – dre is heading into the BBCAN house flexible enough to adapt to any situation.

This fun, outgoing, fitness-lover has a two-pronged strategy when it comes to winning over the houseguests, and winning the game – dominate the physical challenges and use his charm to up his social game.

Even though William plans to use his French accent as his secret weapon to confuse houseguests, this French-Canadian is ultimately trying to be himself and have fun in the house…but if he has to do a little backstabbing in the process he will!

This “really freaking single” singer-songwriter has contemplated several strategies before going into the BBCAN5 house, but is holding out until the first HOH competition to decide on her plan of attack.

Airing exclusively on Global, Big Brother Canada plucks a group of hand-picked strangers from their homes, sequesters them from the outside world, and places them inside a house outfitted wall-to-wall with cameras and microphones that capture their every move. The houseguests compete for a grand prize of $100,000, a $30,000 home furnishing makeover from The Brick, and a new 2017 Toyota 86.