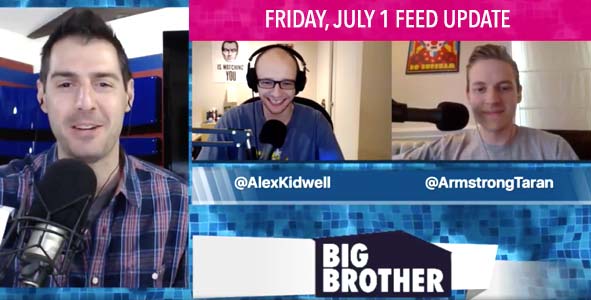 RHAP: On a scale of 1 to 10, how surprised were you to be evicted? Who do you think flipped the votes against you?

Jozea: I was 5 of out 10, surprised. I had an idea already that Da’Vonne or either Natalie or Zakiyah, either one had to flip… I know Da’Vonne, since she left me a lovely message at the end. I think it was Natalie… late night sneaky rendezvous, asking suspicious when I popped up in conversation.

RHAP: How do you feel about having to play against people who have played the game before?

Jozea: Playing against veterans that have had a taste of the Big Brother house before and know strategic moves and skillsets to maneuver the house… I had to dig into my brain to either trust them or get them out of the house. I kinda let my guard down trusting two of them. One, Da’Vonne, because she got evicted from the house in her season, everyone turned on her, the other, Frank, for being a sweetheart in his season – and still getting backstabbed then. You’d think after going through such a thing, they’d come around and be on your side, but obviously that’s not the case.

RHAP: If Jozea is truly the Messiah of the Big brother house, does he feel like it’s his destiny to win the Battle Back competition?

RHAP: What will your strategy be if you get back into the game? Is your approach going to be different than it was at the beginning?

Jozea: My approach would be tight lip, and reuniting with the members of my team that are loyal to me…. And, coming up with a master plan to win the HOH’s and Veto’s and nominate people from hit list, and ensure that they are stuck in that seat, forcing their alliance to go against each other and get them out of the house one by one..