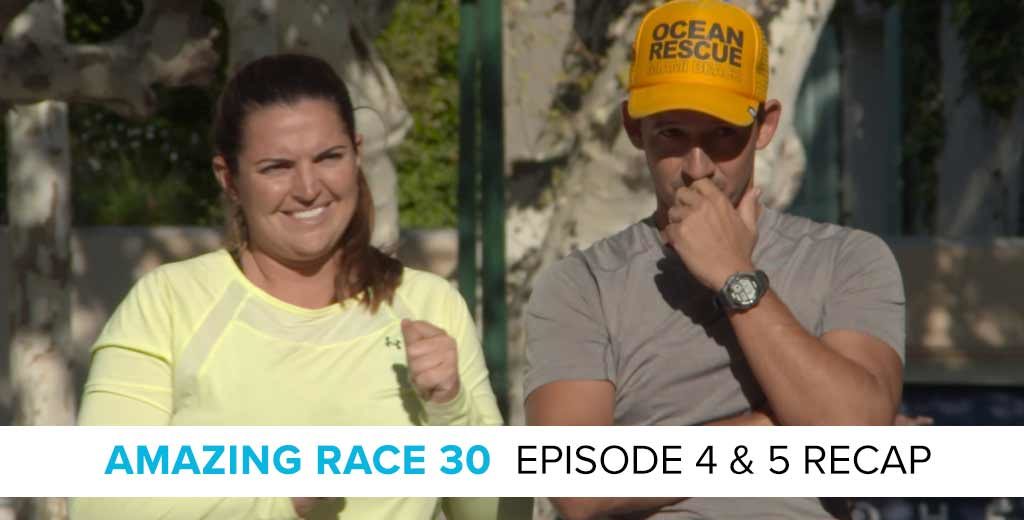 Rob Cesternino is joined by Jessica Liese and Mike Bloom to recap Episode 4 & 5 of The Amazing Race 30.

On a night where we saw the “surprise” engagement of Lucas & Brittany, we also saw the unsurprising end of Cedric & Shawn’s run on the Race. On a night of unsurprising things, Joey & Tim’s elimination could have been seen a mile away. Rob said that Eric & Daniel pushing their car in reverse reminded him of an episode of Mr. Bean. They laughed when Cody said he does not want to move to France because of their lack of a Constitution and a Bill of Rights after Jessica exclaimed how nice it was there. They also enjoyed Alex not reading his clue all the way and failing at the first Roadblock because of it. Rob also noted how the fight between Lucas & Brittany in the first leg was getting a little ugly at one point, while also noting the hilarity of Brittany getting hit by the automatic doors in the supermarket.

While Mike noted how Kristi & Jen haven’t had any major slip-ups in five legs, Jessica called them the team to beat thus far. Rob then called Evan’s cracked tooth the most exciting dental moment since JT’s cracked tooth on Survivor: Tocantins. They also note how Evan has recently either got/shown a new nose piercing. Mike called Cedric in the little boat The Amazing Race version of the fat guy in a little coat. Jessica also appreciated how balanced the detour options in the first leg, Bread & Tread, were. Rob did not like how similar the ball colors were in the Head-to-Head. Jessica noted how Joey & Tim had their best leg before their elimination leg. Mike noted how he loved how snarky Trevor & Chris are, while Rob pointed out how bad Trevor was at the Head-to-Head game. Jessica was surprised how Cedric & Shawn underestimated the skills they would need on the Race.

Building the Catapult on a Game of Thrones Set

Rob compared the second Roadblock of the night to a Game of Thrones set and loved the use of the stockade, but not all the stock puns. Mike noted the unbalanced Detours this leg, and that Trevor & Chris and Henry & Evan even switched Detours to avoid the puzzle. In regards to the engagement, Rob said they lost him at the commercial break, where they lost Jessica when they showed Lucas’ pocket. Mike loved how Phil made Lucas & Brittany stay on the mat the whole time. Jessica was also disappointed that Phil did not have a good pun for Joey & Tim once they came in last. Mike then grossly overestimated that Joey Chestnut had 72,000 Twitter followers when the truthful number was 23,000. Now, we are five out of twelve legs done in this Race, almost at the halfway point.