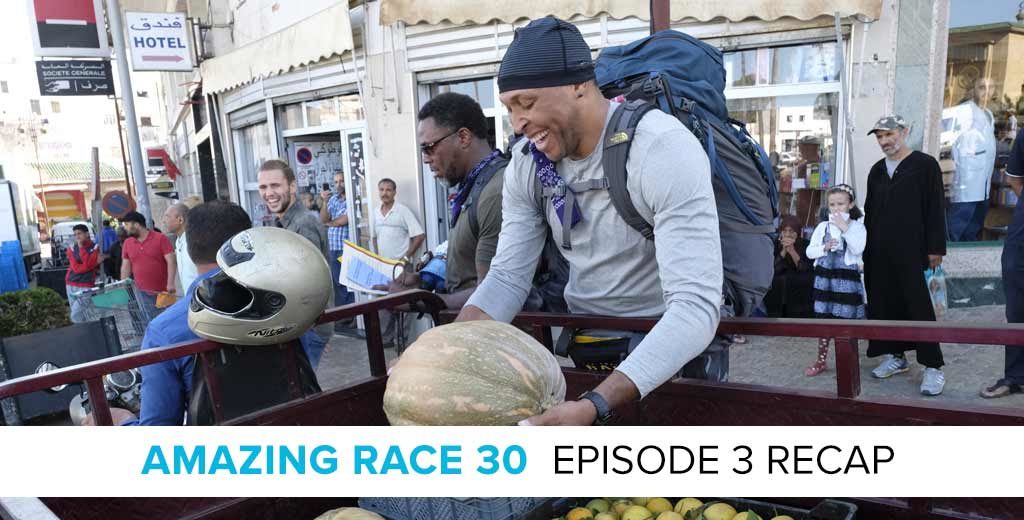 Rob Cesternino is joined by Jessica Liese and Mike Bloom to recap Episode 3 of The Amazing Race 30.

A Night of Many “Why Would You Do That?” Exclamations

While Jessica Liese would not stop to watch a feral cat, they were all amazed with how teams completely changed positions throughout this non-elimination leg. Rob noted how Team Slam Dunk went from first to last and Mike noted how Team Extreme went from third to last and back to the third to end the leg. Jessica said that after she wrote a note saying “Cedric is crushing this,” he ceased crushing it. The first “Why would you do that?” claim when wondering why Cedric wore his backpack for the roadblock. Mike exclaimed “WWYDT?” (Why would you do that?) again moments later after Team Slam Dunk, Team Firefighters, and Team Ocean Rescue chose the fruit carrying detour instead of the belly dancing detour. None of them particularly enjoyed the fish stacking task, as did nobody on the race except Jessica.

The Adrenaline Rush of a Lifetime for the Travelocity Gnome

With a podcast featuring many laughs, Jessica laughed at how Team Slam Dunk missed the Travelocity gnome many times and at how the Travelocity Gnome had the adrenaline rush instead of the actual teams. Mike said he felt bad for Cedric when he was struggling climbing up the American Ninja Warrior-like warped wall. Additionally, after the teams heard the secret code on the phone, Rob was disappointed that the teams did not have to run a mile to find the person to tell the code to. Jessica also said she understood why Shawn was nervous to flag down Cedric after the Roadblock after the penalty they received in the first leg. Jessica also had made an addendum to her detour rules saying that, if you are on a season with a low budget, always pick the puzzle task, which is likely to be easier.

The Second-Most Anti-Climatic Preview vs. Actual Reality Show Event Ever

Jessica gave a hot-take tonight saying that the preview for #GnomeGate2018 was the second-most anti-climatic preview vs. actual reality show event ever, only behind the Survivor: Borneo preview, which referenced a castaway coming back, but only being Greg Buis being a member of the jury. Rob said it was classic Amazing Race to have Brittany have a major problem going into commercial to it immediately being solved right after commercial. Jessica noted how impressed she was with Team Yale’s redemption arc and was happy that they received an actual reward.

The Amazing Race 31: The Race Around a Golf Course

All three laughed at Phil’s enthusiasm that Team Yale’s vacation included an afternoon of mini-golf. Jessica joked that if The Amazing Race runs out of money, season 31 will be a race around a mini-golf course. To which Rob added that a sample detour will be, to knock the ball into the Eiffel Tower on hole 3 or get the ball around the Sphinx in under 5 strokes on hole 5. Jessica was impressed with the duds having off-the-chart nights, including Conor, Jen, Eric, Daniel, and Cedric (whose heart was off the KEG charts). All three laughed at Phil’s numerous puns in the preview.

Jessica (Liese) said that if she was with Cody, she’d try to do as many early roadblocks so Cody can do the later ones. Mike thinks that the next Head-to-Head will be similar to bocce ball and the Survivor marble challenge. Jessica added that she thinks it will take place after Team Slam Dunk’s speed bump. The #Bloom5 was created when he said he thinks the top 5 from this leg will be the final 5, but Jessica substituted Team Chomp for Team Big Brother, while Rob is skeptical about Team Indy Car’s chances.