Rob Cesternino and Jessica Liese are live on Friday, 27 February to recap episode 2 of The Amazing Race 26 where we saw CJ and Libby get eliminated.

Jess much preferred this episode to the premier. For Jess the premier of The Amazing Race as too much teams and not enough tasks. This episode went a long way to fixing that.

If Jess had a ranking of every team to go on the race, she would put CJ and Libby in the bottom 100. Rob points out that they only managed to make it through the first leg by the grace of the U-Turn. Jess just felt that they were really out of their depth and Rob and Jess thought they had just accepted that they were going to go and decided to enjoy the rest of the race.

Jess thought for a second that Rochelle was going to be medical evacuated because Jess thought that Rochelle would not have called for a medic if it was not for something serious. Rob was surprised that they didn’t choose the share detour first as they were much better at it.

Jess at first liked the addition of the date night before each leg. Jess feels it’s a new way to see the teams interact and it also provides us with another opportunity to see the country that they are in. But Jess doesn’t like the fact that the team that gets it is random, Jess would prefer if there was a task for the date night. Rob feels that is really out of place on a show where teams are racing. Rob put of his tinfoil hat and contemplated production giving Harley and Jonathan the reward on purpose.

Jess suspects that the reason that the teams that have just met are doing well because they have no reason to act differently around each other and the fact they have just met means that they are more patient towards each other. As opposed to the other teams who have been dating for a few months and are at a point where they don’t know each other well enough but are not on their best behaviour. Jess also suspected that the teams who have been put together, applied separately so both members are fans of the show. Rob and Jess both agree that Jeff and Jackie are the team to mostly to find love.

Rob suggested that the teams should be told what the prize is for coming in first at the beginning of the leg instead of at the pit stop. However Jess points out that the prize could be really bad and so the teams won’t be motivated to win the leg then the sponsor will be annoyed. Rob thought that the sponsored prize this leg was strange because you don’t need more than one Fitbit however Jess says that she would be really happy if she won a year a groceries.

Jess thinks that Ally and Steve are the Adam and Bethany of this season because they are quietly confident and stealth funny. Rob and Jess find it safe to say that Bergen and Kurt do not have a love connection because they look way too much like each other. Jess thinks that a meltdown is looming for Blair and Haley in the next episode and Rob thinks that we will see their end in the next episode. Jess finds Harley and Jonathan adorable and finds the fact that Jonathan is camera shy and an introvert appealing.

Jess thinks that Jelani and Jenny are complete game bots and Jess feels that they will not find love on the race but they might get together after the race. For Rob and Jess they are number one in the power rankings. Coming into the season Jess thought team New York would be a lot more argumentative in the race but instead they are just not very good at the tasks. Jess doesn’t think that they will make the top five.

Jess thought that the box roadblock was a fun challenge to do but as a challenge to watch on TV it was not very compelling. Rob found very boring TV and a very poor roadblock.

Rob questioned whether it is was production that made a team miss a train because they were taking a selfie. Jess does not think that the producers are telling teams exactly when to take selfies but instead this time the team just spend way too much time to take their selfie.

Special Thanks to Shane Gallagher for this week’s episode recap! 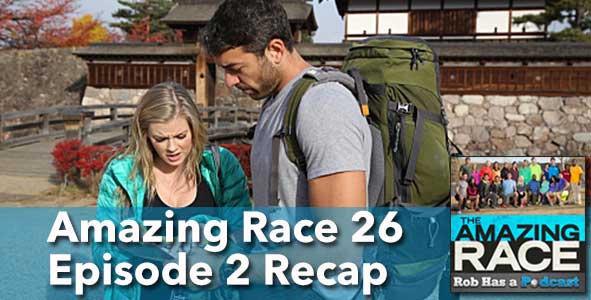