Watch the show LIVE on YouTube   |   RSVP for this LIVE Event

Previews of the 11 teams competing on Amazing Race 26 aka Amazing Race: Blind Date on February 25 on CBS

Rob Cesternino (@RobCesternino) and Jessica Liese (@HaymakerHattie) preview all the teams and the blind date twist in anticipation of next week’s The Amazing Race 26 premiere.

Before breaking down the cast Rob and Jess discussed the season as a whole. Jess thinks that it is possible that one of the blind date couples will work out as she has seen it happen on Survivor and TAR before but Jess at the same time really hopes that there is one couple who really hates each other. Rob is not as optimistic as Jess about the couples finding love but thinks that one or two of them will just hook ups. Jess also hopes that people from different teams become interested in each other.

Jess is not a fan of the is twist because every season of the race the least interesting couple dynamic is the dating couple so she is not excited that every team has this dynamic. Despite this Rob remains hopeful that the blind date twist will bring some good TV. Jess was very surprised that the race decided to switch the format up after last season being so strong, Jess would have much preferred to have a regular season with no twists.

Rob and Jess now broke down the eleven teams racing this season:

Jess notes that TAR US is stealing from TAR Canada with an all Olympian team. Rob thinks that it is good for their relationship that they both have bronze medal as neither will be jealous. Rob explains how this is like how people who don’t make the merge in Survivor shouldn’t date people who did. Jess notes that unlike Survivor Olympians tend to do well and so Jess have high hopes for Aly and Steve. Jess thinks based on their bio that they have an okay sense of humour. Rob feels like that the fact that Steve is apart of a bobsled team will benefit him during race but the fact that Aly is used to complete individually could hinder them. Jess says that there is 0% chance that they have seen the race before they were cast but Jess notes that this does not make too much of a difference.

Rob and Jess are both surprised that this team is not engaged yet because they have been dating for 10 years. Jess got a little nervous when she saw that CJ compared Lebya to a Real Housewive. Jess likes that this team said on their bio actually pet peeves. Jess does not get a winner vibe from them but feels that we are going to like them and their journey through the race. Rob also feels the same way and hopes that they will be good TV. Jess thinks that this team may have actually have been a fan before applying.

Jess would have been more hopeful about their chances on the race if they had been an international pilot and flight attendant but Jess feels that their travel experience is still beneficial. Jess notes that on a normal season where there is a variety of ages between the teams, an older team like Jeff and Lyda can slip by however on a season where every other team is under 30 they could be in trouble. But Rob adds that their age could mean that they are much more calm and collected than the other teams. Lyda’s attitude really reminded Jess of Misty from last season. Jess sees them going out early but Rob can see them going further.

When Jess was 10 her favourite “New Kid on the Block” was Jonathan Knight as he said in an interview one time that he didn’t like heavy metal. Jess thinks that this is completely stunt casting but is still excited to see them on the race. Jess likes the nostalgia factor about this and doesn’t mind stunt casting if it is someone who used to be famous. Harley and Jonathan’s pet peeves for each other of complaining and being late give Rob and Jess a little concern. Jess does not see any universe where this team wins the race, the only team she can compare them to is the Beekman boys, but that is not much hope. Rob feels kinda good about them and is looking forward to what they bring to the table.

Jess thinks that these are the only interesting team in the cast. Rob says that they have given themselves their own hashtag: #smalltownsweethearts. Jess gets the impression that they get on with each other well and will work together well. Rob and Jess get the impression from their bios that they will be a competitive team. This is the team that Jess wants to win but sees them going out in the fan favourite fourth place. Rob does not have high hopes for them but Rob thinks that they will be good TV.

Rob feels that these two are going to be good TV. Rob and Jess are both interested to see if Matt was telling the truth when he said he was like Kevin Hart. Jess think that this going to be one of the yelling couples this season and it is because of this that Rob and Jess want them to go far. However Jess feels like they are going to go out early because they will be too explosive, Rob thinks that they will go a bit further.

Jess loved Kurt’s line in his video when he said “I have the testosterone of a man and the wrath of a women” and Jess hopes that we will get more one liners like this during the season. Rob and Jess think that these guys are more friends than a couple. Rob doesn’t see any chemistry but thinks that they will get on very well. Kergen is not well traveled and so it could hinder them and Jess thinks that they are mostly there for the experience instead of the competition.

On paper Jess would give this blind date team the best odds to hit it off based on their similar interests. After reading Blair’s bio Jess found him adorkable. Jess thinks that Blaley is going to go far as they are the least interesting team. Jess thinks that a blind date couple who are very focused on winning and are so boring that they are not involved in any drama can win.

As a Vegas showgirl Jackie is a common reality trope who doesn’t have a history of doing well. However Jess does not that it takes some physical ability to be a showgirl. Jess feels like this is going to be the team which she will forget is still in the race every week. Jackie’s bio really turned off Rob and Jess especially the fact that she compared herself to Kim Kardashian. Rob and Jess think that Jeffrey is too boring for Jackie and Jackie is too outspoken for Jeffrey.

Jess feels that they are not on the same page at all. Jess thinks that Laura is very upbeat and feels that Tyler won’t like an upbeat person. Neither Rob and Jess have high expectations for this team but they feel that we might want them to stick around because their arguments will be entertaining. Rob has a feeling he might have an argument between them during their exit interview.

Jess is picking Mike and Rochelle as her pick which she wants to win and is picking Blair and Haley as the team who she thinks will win. Rob is rooting for Matt and Ashley to win and thinks Harley and Jonathan will win.

Thanks to Shane Gallagher for the recap of tonight’s show 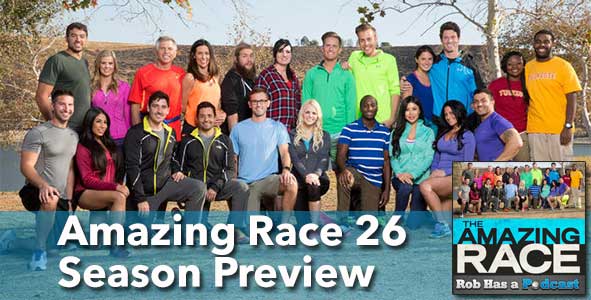