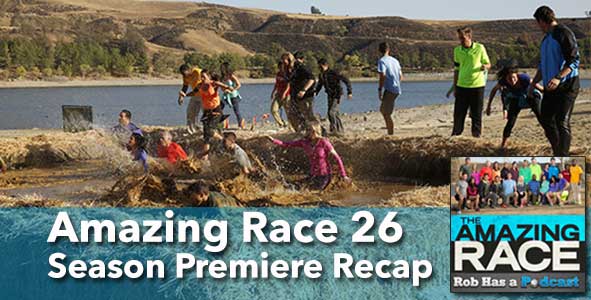 Jessica Liese and Haley Strong are here to break down everything that happened on the premiere of The Amazing Race 26 where we saw Jeff and Lyda be the first team to be eliminated.

Haley both likes and hates to new introduction of racers taking selfies during the race. She likes it because if she was a racer Hayley would like the fact that she could take pictures from her perspective along the way however she doesn’t like that most of the racers just took photos of them and the ground instead of them and the surroundings. Jess was confused if the phone was meant to be a product placement as no brand was mentioned. Jess is not loving the selfie cam at the moment and doesn’t really like the name. Haley points out that the racers are wasting time taking selfies and Hayleys says that she would find it funny if a team got eliminated because they were taking a selfie.

Haley found the hour and a half premiere was a bit long especially after the Survivor premier. Jess thought they could have made it an hour long episode and also felt like they should have added an extra task.

Jess felt like the sake detour was a little lacking and a bit thrown together. Haley thought at the beginning that teams had to match up 10 orders but instead they just had to match up 1 order which made for a lackluster task. Jess thought that the reason for teams not switching from the steps to this detour was because it was really far away. Jess points out that the teams that did the sake finished well before the teams that did the steps but it took a lot longer for the sake teams to reach to next clue box.

Haley would have preferred a cast of different types of relationships as it adds a lot more dynamics but she is not too bothered by the new twist. Although Haley feels like the twist is force and feels like production is trying to manufacture drama. Hayley thinks that Jelani and Jenny have the best chance of making it far in the race but she feels like Tyler and Laura have to best chance of continuing their relationship after the race. Both Jess and Haley feel that a lesbian couple should have been apart of the cast.

Rochelle and Mike really remind Haley of Cat and Jessie from The Amazing Race AUSvsNZ. Jess feels like that they really know how to communicate with each other and their aesthetic and personality means that they will not fade into the background. Both Haley and Jess feel like their hashtag of #TruckStopLove is very uncomfortable and questionable. Haley liked Bergen and Kurt’s hashtag of #BlondeLove but doesn’t like that blonde is spelt the female way. Jess felt that it didn’t make sense to have a hashtag for a team be #TeamJJ when there is two team where both members name begins with J.

Haley feels like that the race should not have scrapped the save just after one season. She feels that is not enough to just try it out on one season. Jess also points out that the teams on this would have been more likely to have used to save than Jim and Misty so the save might a good twist this season. Jess thought that the use of the U-Turn this early was so that the teams cannot guess which leg will have a U-turn. Jess also feels that it would have been a bad move for a team to use it this early however Jess understands why the teams used it during this episode. Hayley felt that it was too early for the U-Turn as no relationships between teams has formed yet.

Haley and Jess thought that the step detour was not too complicated and they both thought that the teams should not have found it that difficult. Jess noted that it practically the same arm movements over and over again. Haley doesn’t understand why some of the teams didn’t switch after they had found the routine so difficult.

Both Jess and Haley feel like an individual confessional from the members of the blind-date teams would be very interesting and could bring some entertainment if one member really likes the other and one member hates the other.

Special Thanks to Shane Gallagher for tonight’s episode recap.