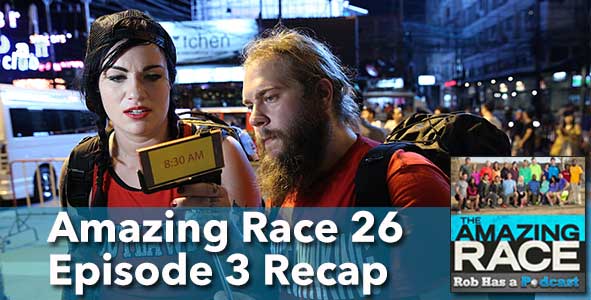 Watch this LIVE show on YouTube   |   RSVP for this LIVE event.

Rob Cesternino and Jessica Liese recap episode 3 of The Amazing Race 26 on CBS from March 6, 2015

Rob Cesternino and Jessica Liese are live on Friday night, 6 March 2015 after episode 3 of The Amazing Race 26 where we saw Harley and Jonathan get saved by the first non-elimination episode of the season.

Both Rob and Jess thought it was completely obvious that Jonathan and Harley were going to come in last and not get eliminated. Jess felt was thinking because of the lack of urgency around Jonathan and Harley. Rob felt like it was a leg early for the non-elimination leg however Jess points out that they can’t put the non-elimination leg in the same place every season.

Jess did not see Rochelle and Mike finishing in first place coming and she points out how it show anything can happen. Jess is very happy to see them in first place. Rob questions the timing for Matt’s proposal, Rob feels that you should do it if you are eliminated or finish in first, not if you are in the middle of the pack. Jess feels like it was because all the other teams were so they could share the moment. Rob and Jess think that the reason that Matt freak out when he lost his fanny pack because the ring was in it not because they lost their passports. Jess suggests that a team should bring a fake ring just in case they loose it.

Jess is very happy that Kurt and Bergen are no longer dating because they are now just friends and Jess really missed the best friend team this season.

Jess does not remember seeing where the racers sleep other when a team in injured or sleeps in. Jess thinks that the race might be trying to bring something in called eat, sleep and mingle which they did before the season 15. Jess also points out another shout out to old seasons when the teams were allowed to have fun in Thailand. Rob thought that the race was trying to recreate the hangover this leg.

Jess was surprised that the race did a task with people who were transgender, Jess didn’t think it was disrespectful but she thought it was a bit tone deaf. Jess felt like the way they did it was a bit exploitative. Jess thought that actual task was too similar to the other dancing task in Japan. Jess liked Harley and Tyler and ladyboys.

Jess thinks that Blair and Haley’s relationship is an example of personalities not matching. Jess points out that Blair can’t hear Haley when she is right and Haley doesn’t let it go when she was right and he was wrong. Rob thinks that they speak their mind to each other too much, Rob thinks that it is good for the blind date teams that they are polite to each other. However Jess explains they you want a balance between speaking your mind and being polite. Rob suggests that the fact that he is a doctor and she is a nurse might contribute to her getting annoyed at Blair.

Rob felt like at the start of the episode Jay and Jenna had sparks but by the end of the episode their sparks were slightly gone. Jess points out that at the end of the day it is a race and they have to focus on the race and deal with their relationship after. Jess thinks that it is a good sign that they were the only team to share a room. Jess feels that is more likely for a team to hook up after the race than in the middle of the race.

Rob thinks that Jelani and Jenny are loosing a bit of their momentum. Jess is pleased by this as she finds it boring when a team steam rolls over all the other teams. Rob and Jess are both a bit underwhelmed by Tyler and Laura. They are about the middle of the road in everything.

As soon as Jess saw the wave park detour she immediately knew that it was going to be very difficult because of what happened last season. Even though the wave task would have been so much funner but the zip line is much easier.

Jess would say they Steve and Allie are the strongest team at the moment because they are very consistent and jess thinks if they go out early it will because of factors beyond their control.

Jess really hopes that Harley and Jonathan can bounce back from their last place finish. Jess says that she likes that every leg Jonathan faces a new fear.

At the end of the audio version of the podcast Rob interviewed the team eliminated on the second leg, CJ and Libby.

Special Thanks to Shane Gallagher for tonight’s episode recap.