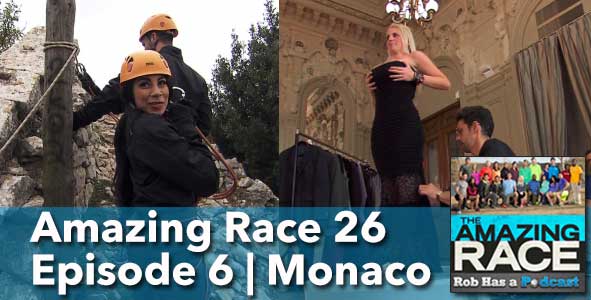 Rob Cesternino and Jessica Liese recap episode 6 of The Amazing Race 26 on CBS from April 10, 2015

Rob Cesternino and Jessica Liese are live on Friday night, the 10th of April 2015, to recap episode 6 of The Amazing Race 26, where we saw the teams race around to beautiful city of Monaco.

Jess is sad to see Jeff and Jackie be the team that was eliminated tonight because she felt like they had the best chance of hooking up. However Rob feels that Tyler and Laura have to best chance to have a relationship.

Rob felt that this leg was a little odd. Jess was impressed that the race spent a lot of money during this leg especially considering the amount they have cut back in recent seasons. Rob found it unusual that the racers had to dress up into a costume two legs in a row. Jess has no problem with the teams dressing up as Jess feels that it adds humour and entertainment. Jess also thought that Mike got the short straw with the suits, Rob described him as business casual.

Rob and Jess did not expect Jeff and Jackie to be eliminated this leg because they got little air time. During the episode Rob thought Mike and Rochelle or Matt Ashley could go home but never Jeff and Jackie. Jess was happy that the race brought back bunching the teams together at the beginning so we could get a surprise elimination just like old school Amazing Race. Jess felt bad for Jeff and Jackie because there was very little margin for error in this leg. Rob thinks that Jackie giving Jeff her number at the end was a little tame.

Rob and Jess both give kudos to Mike and Rochelle for getting on the first flight and Jess felt again that it reminded her of old Amazing Race seasons. Rob was surprised that they finished in third especially after they struggled with the detour.

Jess thought that the way in which the detours were chosen was very interesting and when she saw what the detours were she knew why they did this. Jess thinks it because that the producers wanted to show off both task and they were afraid that all the teams were going to chose the zip line detour. Rob agrees and he feels that the perfume detour sounded harder and was a lot harder to complete. Jess speculates that the distance between the detours was huge because no one switched detours despite some teams struggling.

Jess thought that the perfume task was a little too difficult because after a team had smelt 2 or 3 different scents they would have all blended together. Jess suggests doing all the smelling before anything else to avoid the smells blending together.

Rob and Jess felt that it was a matter of time before Jelani and Jenny became the new
argumentative couple. Jess thinks something has to go seriously wrong for Ally and Steve not to have a real shot at winning. Jess feels that Mike and Rochelle are a pretty decent team when they can get it together. Jess thinks that the blind team that has the best chance of winning is Tyler and Laura but Jess thinks that the most entertaining and interesting outcome would be if Blair and Haley win the race.

Jess does not think that this season is a bad season. Jess admits that should thought that it could have been one of the worst before it started and Jess feels that it didn’t have the best start but is happy to say that she is enjoying it.