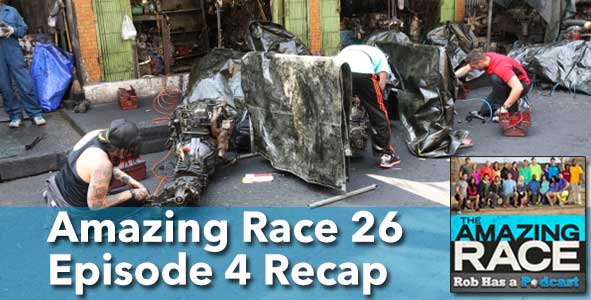 Watch this show on YouTube   |   RSVP for future LIVE events

Jessica Liese and Mike Bloom are live on Friday night, 13 March 2015 to recap episode 4 of The Amazing Race 26, where we saw Harley and Jonathan get eliminated.

Jess thought this was a very interesting episode as far as a race design standpoint, tonight’s episode was not something Jess and Mike were used to. Mike felt it was more of a path divergence rather than a detour, Mike also felt like it make any real difference which one the racers choose as they both took about equal time. Jess thought that this twist was the more literal definition of a detour. Mike did think that the boats were the right choice as there is no traffic and the boat drivers definitely knows where he is going. Jess thought that the tuc tuc tasks were quicker to balance the detours out.

Jess thinks that we are reaching the point with the blind date teams where they have stopped being polite and now are being real. Jess was surprised to see Jelani and Jenny fall apart this leg because they were the clear front runner before. However Jess points out how a team not getting on does not mean that they will not do well. Mike did not see the reason for Jelani and Jenny burning bridges with other teams when they are not going to be in last place.

Jess found it funny how Hayley found another thing that Blair didn’t listen to her about only a few minutes into the leg. Mike was aggravated for Blair when he tried to give the lead to Hayley and she wouldn’t let him. Mike suggests that Blair she pick his battles better with Haley and try to speak in a more reasonable manner.

Jess was confused that the teams were eating the century eggs in Thailand as she thought they were Chinese. Jess thinks that the race were stuck for tasks for the racers to do so they had to fib a little. Mike suggests that these eggs are not really delicacies but Jess is pretty certain that these are real delicacies. Jess questioned whether it would have been easier to eat the egg of they were on Survivor because they would be hungry but Mike points out that the taste would have still made them gag.

Jess and Mike loved how the race planted fortunes for all of the racers in the temple. They especially loved the fortune Kert and Bergen received. Jess finds it annoying when when the fourchain give advice and not your future.

Jess thought that the roadblock was extremely quick and easy. Mike was expecting for the teams to have to do something else after they found the screwdriver because it was so quick.

Despite the tasks during this leg leaving something to be desired Mike enjoyed to teams interactions and is presently surprised with the season so far. Jess actually feels like she has a good grasp on most of the teams and is liking the different personalities this season and is getting the drama they she wanted out of the teams. The only thing that Mike is annoyed about is that the producers are trying to push the love angle. Jess points out by having these blind date teams the arguing comes very naturally instead of a team coming into the race wanting to be the team that doesn’t get along.

Mike doesn’t think that the blind date couples are in too much danger despite their fighting. Mike just thinks that the remaining dating teams don’t have what it takes to win.

Mike and Jess question whether the race will be able to survive the two week break coming up. Mike and Jess wonder if the viewers will continue watching when the race comes back in April. Mike is sad that the momentum is going to drop especially because he thought that this episode was the best so far.