Watch this LIVE show on YouTube   |   RSVP for this LIVE event.

Rob Cesternino and Jessica Liese recap episode 5 of The Amazing Race 26 on CBS from April 3, 2015

Rob Cesternino and Jessica Liese are live on 4 April 2015 after episode 5 of The Amazing Race 26 where we saw Bergen and Kurt eliminated after falling way behind.

Jess and Rob both agree that a lot of teams broke one of Jess’s big rules which is learn how to drive stick shift before going on the race. Rob gives the blind date teams a little less accountability for this mistake because they didn’t know their partners coming into this however Jess gives them more accountability because they should have prepared for everything as they do not know what their partner can do. But Jess still gives no one a pass for not learning to drive a stick shift.

Rob feels like the decision between Bergen and Kurt not to continue things romantically was not mutual however Jess disagrees. Jess thinks that Bergen checked out of the race once there was no romance involved. Rob questioned if Kurt tried to intentionally quit when he made Bergen get out of the car but Jess feels like there was much easier ways to quit if they wanted to. Jess does agree that their heart was not in the race this leg.

Jess was surprised to see Jeff and Jackie fight because she thought that they were the team that was getting on the best. Rob feels like this was one of the worst fights on the race that he has seen, he feels that they were even worse than Brendon and Rachel.

Rob and Jess both agree that Haley is the problem in her relationship with Blair. rob admits that he felt bad for Blair during their fight because it was in front of the other teams.

Rob gives Tyler and Laura a lot of respect for not losing their cool when they lost their fanny pack. Rob felt that they stayed cool, calm and collected throughout and handled it the best they possibly could. Jess felt like what Jeff and Jackie did was down right villain like. Although Jess thought that it may have brought Jeff and Jackie back together. Jess questions whether Jeff and Jackie were on the verge of breaking the rules by tampering with the fanny pack. Jess thought that this move was a little bit a of dirty play, Jess would have given it back to Tyler and Laura as soon as she saw them but she wouldn’t have looked for them.

Jess and Rob would has choose the stein detour because it seemed a lot easier. Jess was surprised that Haley could not finish the detour. Jess flashbacks to season 24 during the roadblock. Jess liked the addition of throwing the bucket of water on the racers if they failed. Jess speculates that the Olympians may be getting a winners edit and are being set up as the team that is good at everything.

Special thanks to Shane Gallagher for tonight’s episode recap. 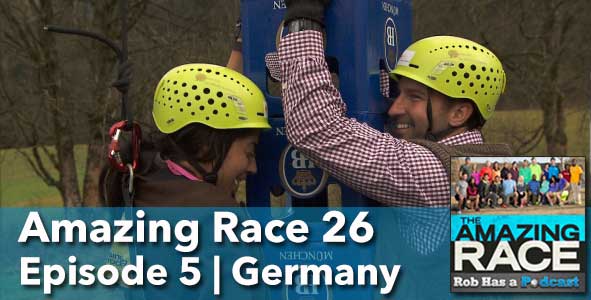