Rob Cesternino and Jessica Liese recap episode 10 of The Amazing Race 26 on CBS from May 1, 2015

Rob Cesternino and Jessica Liese are live on Friday the 1st of May 2015 to recap episode 10 of The Amazing Race 26 where we saw Matt and Ashley get eliminated in Peru.

Jess was very excited for the race to return to Peru because it has been a very long time since the race has gone to Peru. Jess feels that on any other season Matt and Ashley would be the intense bickering team but on this season there are so many of those teams that they have become a normal team.

Rob compared Hayley doing the physical roadblock to when Caesar from The Dog Whisperer makes a dog owner walk their dog more often so that they don’t have has much built up energy.

Rob thought that this episode was a little bit of a fall from grace for Tyler and Laura, who Rob thought were the odds on favourite to win the whole thing. Jess points out that they made the same mistake of not getting another flight as Jim and Misty from last season. Jess suggests the reason the race does this is so the teams don’t get stuck in an airport for very long periods of time.

Jess gives another JL rule which is to be nice to all teams even if they are annoying just in case they may be able to help you with flights. Rob questions whether Hayley is a fan favourite or a villain, Jess says that she is both but over the internet Hayley is the subject to a lot disrespectful hate. Rob sees Hayley as a first generation Rachel Reilly because of her constant mood swings. Rob also notes that Rachel did not become a fan favourite until her second Big Brother expertise and the same may be for Hayley. Jess and Rob both agree that they want her to go far in the race.

Even though Blair is not the most interesting personality on the show Rob and Jess give him credit for the way he plays off of Hayley, Rob compares some of his one liners to Jim Halpert from The Office. Jess thought it was a pretty strong week for Jelani and Jenny. Jess loved how Jenny and Hayley both did the physical detour well without complaining.

Jess questions whether the taxi driver was telling the truth when he told some of the teams that the area was dangerous and they should probably take his cab. Rob wonders if the teams would have been actually in danger and Jess points out that there has never been anything too serious like that happen on the race.

Jess knew as soon as she saw typewriters and llamas beside each other that it had something to do with the race. Rob tries to about the actual situations whether you would need to actually rent a llama. Jess thought that sugar chain task was going to be a lot harder for the teams especially after reading about the difficulties of cutting down sugar chains in a book.

Rob was annoyed that the racers were provided calculators whe pm they had to work out the number of calories they need to burn off. Rob felt that the fact that they were given calculators made it not even a task. Jess points out that in the past that racers had to bring calculators on the race and if they didn’t they wouldn’t be able to use one.

Jess says that she saw both sides on the detour this past summer on The Amazing Race Canada and having seen both of them Jess says that she would have chosen the potato task. Rob didn’t think that the potato detour was good TV because the viewer was not able to see if the racers were wrong.

Rob very surprised that the race repeated the Fitbit prize for the first placed team. Rob is confused why a team would need all the different types of Fitbits and Jess points out that it was more ridiculous because all of the teams were given a free Fitbit earlier on in the race.

Jess would not have predicted that Mike and Rochelle would be the last remaining pre-existing dating couple and Jess is very happy with that. Jess also points out that just because they don’t look like the fittest team doesn’t mean that they aren’t fit.

Rob thinks that the best case scenario is for Blair and Hayley to win the race because they are a blind date couple and their story is the most interesting. Jess thinks if they win we will look back on this season with a little more fondness they we would normally.

Special Thanks to Shane Gallagher for todays episode recap 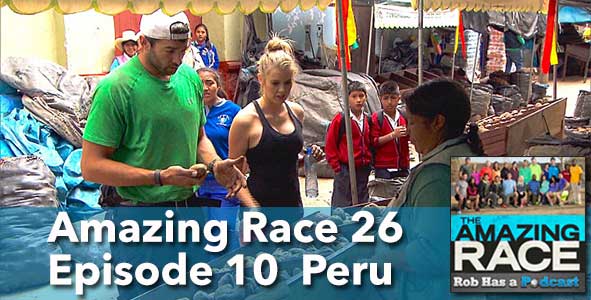