“You can look me in my sweet blue eyes all day and I’ll tell you sweet nothings and you’ll believe all of them.” – Tyson Apostol

Tyson Apostol is known for his athleticism, his goofy antics, and his sarcastic quips. Tyson is a three time Survivor player who has had wildly mixed fortunes in each of his attempts at playing the game. He first played in season 18, Survivor: Tocantins, where his physical strength helped his tribe enter the merge with a large numerical advantage. Ultimately, he was seen as too much as a threat, and was blindsided to finish in 8th position.

He returned in Survivor: Heroes vs. Villains two seasons later, cast as a villain due to his infamous sarcasm. Again, he helped create a physically strong tribe, and his social skills secured him in a dominant alliance within the tribe. However, in a move that was a candidate for one of the dumbest moves of all time, Tyson did not follow the voting plans of his alliance, making himself vulnerable and was voted out in 15th place.

Tyson played again in season 27, Survivor: Blood v.s Water, paired with his long-time girlfriend Rachel Foulger. Despite Jeff Probst in his preseason assessment dismissing Tyson’s chances of winning the game, and Tyson suffering from a dislocated shoulder early on, he went on to dominate the game, and win in a 7-1-0 vote against Monica Culpepper and Gervase Peterson.

“I love seeing people cry… when you crush their dreams.” – Tyson Apostol

Tyson first appeared on season 18, Survivor: Tocantins. He immediately began to play a very aggressive and arrogant game. He was placed on the Timbira tribe, which (despite being dysfunctional) were able to dominate in the challenges, thanks at least in part to Tyson’s athletic ability. Tyson was also able to form close bonds with some tribe members (even becoming Coach Benjamin Wade’s “Assistant Coach”), while antagonizing others, such as Sierra Reed, who saw him as egotistical.

The physical dominance of the Timbira tribe meant that Tyson attended only two tribal councils prior to the merge. In both of these councils, the tribe voted against the weakest members, and Tyson was never in jeopardy.

The Timbira tribe was six strong at the merge against JT, Stephen and Taj. But at this point, Tyson and Coach made a fatal error. Instead of keeping their Timbira numbers strong, Coach convinced Tyson to join him in a new “Warrior Alliance” with JT and Stephen, in a scheme to vote out Coach’s nemesis, Brendan Synnott and get rid of the other Timbira members they didn’t like. JT and Stephen went along with it and watched with glee as Timbira turned on itself.

After Brendan was sent home, next Tyson and the Warrior Alliance planned to target Sierra, who Tyson had been fighting with for much of the game. However, when Tyson failed to win immunity, JT and Stephen realized how much of a threat Tyson was and blindsided him, sending him to the jury. On the jury, he voted for JT to win the game.

“America thinks I’m an idiot, but as far as I’m concerned I’m still the winner.”

Tyson returned to Survivor two seasons later, where his sarcastic nature and rivalry with some of his tribemates in Tocantins earned him a position on the Villains tribe. He was able to reconnect with his former alliance mate, Coach, and his social skills placed him in a powerful position in the tribe.

But, after losing immunity on day 15, the Villains prepared to visit tribal council again. Tyson was in the majority alliance, led by Rob Mariano, and consisting of Rob, Tyson, Sandra, Courtney, Jerri and Coach against Parvati, Danielle and the new comer whom the cast had never seen play: Russell Hantz. Tyson’s alliance wanted to vote Russell out, but fearing that he might have an idol, Rob directed his alliance to split the votes 3-3, half for Parvati and half for Russell. If no idol was played, and there remained a tie between Russell and Parvati, the plan was to then vote for Russell on the revote.

The problem was twofold. First, Tyson had never seen Russell play as he joined the Villains tribe fresh off of his explosive debut on Survivor: Samoa the previous season. As such, Tyson believed that Parvati was the most dangerous player in the opposing alliance and disagreed with Rob for not making her the primary target. The second issue was that, also because he had never seen Russell play, when Russell approached him moments before Tribal Council and admitted to Tyson that, while it broke his heart to see her go, Russell was going to have play his idol on himself and vote for Parvati to protect his life in the game, Tyson believed him.

Feeling there was no need to split the vote, Tyson switched his vote to Parvati. Russell gave his idol to Parvati, voiding the 4 votes cast against her and leaving his own votes at a mere 2. Tyson was voted out 3-2 against Russell, finishing a mere 15th overall. Tyson immediately concluded, “I was the victim of my own stupidity.” At the Heroes vs. Villains reunion show, this was nominated as one of the dumbest Survivor moves ever, but lost out to JT’s move of giving Russell his idol.

“It’s a game, you know? Too many people take it serious, and it shouldn’t be. It ruins their lives and it makes them angry.” – Tyson Apostol 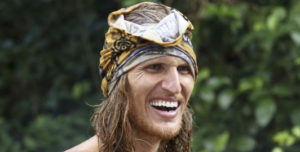 Tyson became a three time survivor player in season 27, when he played Blood vs. Water with his long-time girlfriend, Rachel Foulger. He was placed on the returning players tribe- Galang. Despite many of the other players admitting to being wary of him pregame, Tyson’s social skills enabled him to join the majority alliance, along with Aras Baskauskas, Monica Culpepper, Tina Wesson and Gervase Peterson.

His game hit an early snag when the opposing “loved ones” tribe saw Tyson as one of the biggest threats and targeted and voted out his girlfriend Rachel on day 6, hoping that (like Rupert) he would immediately trade places with her on Redemption Island. Although it was an emotional decision, Rachel believed that Tyson had a much greater chance of winning the game than she did and Tyson chose not to switch places with her. Rachel lost the Redemption Island duel, leaving the game on day 7. This proved to be a pivotal moment in the game, as Tyson vowed to make the most of the opportunity and win the game for the both of them. 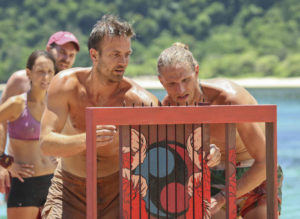 Once again, Tyson worked his way into a physically dominant tribe, and only attended one tribal council before the merge. He voted with the majority alliance, for Laura Morett. During this time, Tyson and Gervase (whose loved one had also been voted out) formed a strong bond that would last for the rest of the game. Tyson also used a tribe swap to his advantage, building an alliance with Ciera, Caleb and Hayden. Believing that Aras was his greatest competition, Tyson subtly began to turn people against Aras by insinuating that Aras was calling all of the shots. Learning from his previous experiences, Tyson also leveraged his shoulder injury, a dislocation from an early challenge, to be seen as less of a challenge threat.

When the tribes merged, Tyson recruited Monica (who had also lost her loved one) and blindsided Aras. Vytas and Tina were then voted off in successive tribal councils. Tyson was at this point seen as the clear leader, with both Vytas and Tina calling him out and saying that he had lost their jury votes.

Tyson was able to convince Ciera to be loyal to him to the point of voting out her mother. Ciera even told Tyson when Hayden, Caleb and Katie came to her with a plan to vote Tyson out. At final 7, Tyson was worried that Ciera was going to vote with Hayden, Caleb and Katie, and even played his immunity idol. However, Ciera remained loyal. Tyson had Ciera, Monica and Gervase convinced that they were going to the end with him, and also that they would beat him in a jury vote.

At final 6, Tyson’s game was in the most danger. At tribal council, Hayden was able to convince Ciera that Tyson had no intention of taking her to the final three. As a result, she changed her mind last minute and voted with him and Katie, resulting in a 3-3 tied vote between Monica and Hayden. A re-vote failed to split them, and Ciera, Katie and Tyson called each other’s bluffs drew rocks. Luck was on Tyson’s side, and Katie drew the unlucky rock, and was sent to Redemption Island.

From this point, Tyson was clearly safe in the game. He had an immunity idol, and also won the last two immunity challenges. He reached the final three with Monica and Gervase, and won in a 7-1-0 vote. Vytas voted for Monica, believing that she deserved to finish in second place over Gervase.

Tyson’s evolution from Tocantins to Blood vs Water clearly demonstrates the advantage of experience. In Tocantins, Tyson was entertaining, but polarizing and eventually blindsided. In Heroes vs. Villains, if not for a impulsive move, Tyson was set to once again go deep into the game. But in Blood vs. Water, his performance was strategically dominant, consistent, and he was in control nearly every moment of the game. It was interesting that Tyson, originally seen as a great physical player, but not a good social player, was able to play his most successful game almost entirely based on his social prowess, which made him the winner of one of the most competitive seasons of Survivor ever seen.