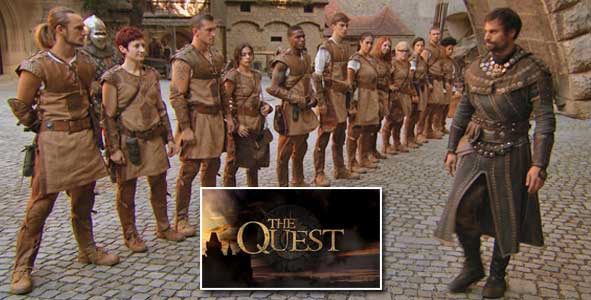 The Quest Review: Recap of the Series Premiere of the New ABC Fantasy Reality Series

Rob Cesternino talks with Jessica Liese about the first ever podcast about ABC’s new reality TV series, The Quest – which is more like a combination of LARPing and Whodunnit?

The big question is: Will The Quest be able to resonate with the American viewing public?

Rob thinks the effects on the show are really dazzling, not cheap at all. And it’s just as anything that you would see on Game of Thrones. Jess is wondering where they ever found the castle. It really looked great. Rob comments the narration and whole story book were great. They obviously spared no expense to make this work. Jess says that with this grandeur, you either have to go big or go home.

So they have 12 people picked out who have some sort of a Sci-fi or warrior type background of interest. These people were then transported to the magical world called the Everealm, which is sort of an amalgamation of all these mythologies. Jess adds that it’s like Hogwarts meets Lord of the Rings meets Game of Thrones.

So they brought them into a tunnel, like an underground railroad to the magical world. Then they went down the tunnel, got into a mystical river which looks like that in Pirates of the Caribbean. They then met these three women called The Fates who control everybody’s position in the game. They get to look down on you and speak mystically. They are watching the game and trying to find the one true hero. They each have a piece of the sun spear.

The guide, Creo, is basically the MS office paperclip of The Quest who is there to guide them along the way.

There are 12 kingdoms and the bad guys conquered 11 of the 12 kingdoms. They are walking through the haunted, evil woods, The Marwood. There was a guy who got killed. Jess says it could be one of Creo’s guys. Jess says that at this point these contestants are still not buying into it. They’re still trying to figure out how it is being in a reality TV show and trying to figure out what this game is all about.

So they get to the castle. The show is fairly secretive about where the castle is. Somebody tells Creo to lock them away and they are put in some sort of a holding pen. This the first real point in the show where the characters are doing something. Creo comes back with this other guy who gives an exposition of what’s going on. So they found out that the first quest was over 8,000 years ago and The Fates are testing these 12 heroes with one character ending up as the one, true hero.

Rob and Jess then walk us through the people in the cast.

Adria talks about her love for LARPing. Rob doesn’t remember Andrew really doing anything that’s memorable. Ashley is the horse whisperer but didn’t make a huge impression on Rob either.

Bonnie is chosen as the greatest leader in this episode. She is definitely one of the characters that stood out. Her interesting backstory is that she was taught to walk straight after being born with her legs twisted.

Christian got a lot of airtime. Rob thinks he looks like Orlando Bloom. Jess thinks he is the villain. He seems to be the nerdiest of the group according to Jess. Christian says he has a lot of experience with weapons. He is one of Rob’s favorite guys so far.

Jasmine writes her own Lord of the Rings fan fiction so she’s in the right place. Jim Curry grew up in the wilderness with his park ranger dad and he is a member of the University of Arkansas Quidditch team.

Katherine “Katie” Smaluk is the one who went home in this episode and presumed dead. The Fates just made her disappear. But she’s been tweeting tonight so she’s not dead according to Rob and that’s good news. Katie, by the way, likes jousting.

Leticia Reyes cosplays superheroes which is awesome. She has a green belt in judo and she likes WWF. Lina Carollo grew up in a big Italian family which makes her ready for the competition. Patrick is in the hot seat tonight. He is a math teacher. He survived tonight. Shondo, the MMA fighter is like the Liam Neeson in the group and he is actually the only one in the group who has a considerable Twitter following.

So the Paladins have to wake up very early and they have to go to this training field. The guy who’s gonna train them is quite a tough motivator.

The challenge for this episode: They have this giant crossbow called The Scorpion and with a bunch of arrows about a hundred yards away. The characters group into three. One person stands up on the platform who will oversee the things over the field and tells the person where to aim The Scorpion. The second person is tasked to grab the ammunition and the third person fights. They’re gonna be blasted with mud the entire time while they’re trying to hit the scarecrows.

The team that did the best was the White team consisting of Bonnie, Andrew, and Ashley who hit 6 targets. Bonnie ends up getting the medal of victory. The Blue team only hit four targets so one of them is going to have to leave. It’s either Christian, Katie or Patrick. Rob thinks Katie and Patrick aren’t mentally in the game. Now everybody goes to The Fates and they are there to speak with the three losers. The catch phrase of the season is: May The Fates be with you! which is obviously Star Wars-inspired..

There’s gonna be more shooting of bow and arrows. The three scarecrows are gonna be like on a Lazy Susan spinning around and you’re gonna have to hit the scarecrows with the bow and arrow. The show’s twist: the person with the least arrows in them gets immunity.

The two guys piled on Katie and Rob was kinda hoping it would backfire. Christian got the fused arrows so he was safe. And they’re now voting in an open form. It seems like they’re struggling to find an actual argument in all this. The good thing is that it’s an open kind of voting where one gets to stand behind the person whom you would like to keep. Visually, this didn’t work for Rob because it’s hard to see who is where. So the show needs to work on this.

Katie was then told to meet her fate. Everybody gets out. And then Katie puts her spear in the spear holder and then walks out.

At this point, Rob is interested where this show goes. Jess feels like it’s a typical reality TV show competition at this point but Jess in interested to see what else is coming up.