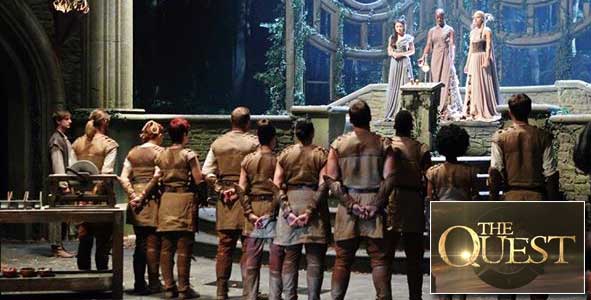 Rob Cesternino welcomes back Zack Storch (@Zadck3) from King of the Nerds 2 to recap Episode 4 of ABC’s The Quest.  This week Rob and co-host Curt Clark recap the strategic duels that the paladins competed in.  Leticia ended up getting the medallion of strategy after defeating Shondo and Patrick in the final duel.

To determine who would go home, Adria, Lina and Jasmine were forced to compete in front of the fates.  After Adria crushed the most skulls, Jasmine and Lina had to be saved by the paladin vote.  Despite a large quantity of balls / ovaries, Jasmine was the one receiving the fewest votes from the paladins to stay.

After Jasmine was eliminated, the paladins arose the following morning to hear an ominous report, ogres are coming from the beyond the castle walls to attack.  In next week’s episode we’ll see how the paladins fare against a battle with an ogre.