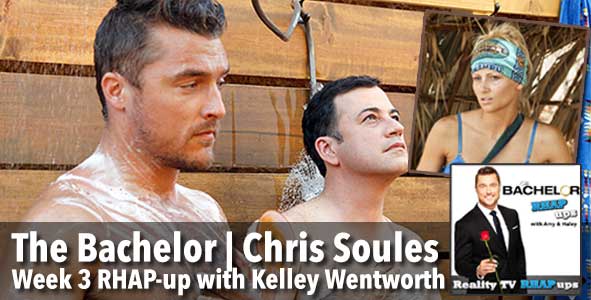 Just like The Bachelor welcomed Jimmy Kimmel this week, there’s a special guest on this week’s Bachelor RHAP-Up! Amy & Haley are excited that the amazing Kelley Wentworth (@kelleywentworth) is joining them on the podcasting journey this week to talk about Week 3 of The Bachelor starring Chris Soules. Kelley brings a unique perspective to the podcast, having been a contestant on Survivor San Juan del Sur and growing up on a farm so she’s ready to talk Farmer Chris and Reality TV drama.

They start off by getting Kelley’s thoughts on the Seahawks’ dramatic win before diving into the episode. This week’s Bachelor had a twist: Jimmy Kimmel took over for Chris Harrison and assumed hosting duties as well as planning the dates. Kelley, Haley and Amy agree that Jimmy brought a lot of welcome humor to the episode– from making the women put $1 in a jar every time they said “amazing” to joining Chris in the shower– but they felt they missed out on some of the craziness and drama due to Jimmy’s presence.

Next they discuss Chris’s 1 on 1 date with Kaitlyn that Jimmy planned. Kelley thought this Costco date would be a fun date because it was true to life and more realistic. Haley thought Kaitlyn was a great choice for this date. Amy also asks them what they thought of Jimmy’s frank questioning about the fantasy suites and how Kaitlyn said she wouldn’t be mad if Chris slept with two other women in the fantasy suite.

The group date planned by Jimmy Kimmel was called Hoedown Throwdown, which included 12 women fighting to perform farm duties to impress Chris, such as shucking corn, shoveling manure, milking goats and drinking their milk, and wrestling a greased pig. Despite Jillian’s athletic prowess, Carly wins the competition. Amy asks Kelley if this competition really proves if these women can cut it on a farm. Kelley can’t really see any of these women adjusting to farm life. The women then move to a lounge for a cocktail party and Carly steals Chris away with the line “I’m a woman and you’re a man, so…” and moves in for a kiss. They talk about all the kissing Chris has been doing this season and how the women are not reacting well to it.

The final date was a 1 on 1 date with Whitney, who was very excited to finally get a date. Kelley, Amy and Haley examine the evidence to determine whether the “wedding crashing” element of the date was staged or not. They wonder why Jimmy Kimmel was not involved on this date. The three of them are not buying that this was not at least partially staged. Kelley thought they made a good attempt to portray it as random but there were too many loose ends such as the random gift and the great sound quality and some of the camera angles.

The final twist of the episode is that instead of a cocktail party, Jimmy informs the women that there will be a pool party. This really upsets Ashley I. because she can’t go full Kardashian. Kelley shares her thoughts about proper pool party attire and makeup (hint: opposite of Ashley I.). They talk about Jade’s strategy for getting alone time with Chris compared to Jillian’s strategy. Jade and Chris test out the bed while Jillian waits in the hot tub. Chris also gets alone time with Juelia who goes into detail about the tragic story about her husband’s suicide. All three felt that it didn’t seem like the right time and place in the mansion or on the episode to delve into that information, but their hearts go out to Juelia for what she had to deal with.

Amy then shares the results of the draft after Trina, Amber, and Tracy were sent home. Haley has jumped one point ahead of Rob with a whopping 36 points (scoring points for both of the 1 on 1 dates this week, many kisses, and no one from her team being eliminated). Rob loses Amber from his team but she still got him a kiss point, so he holds strong with 35. Amy is now a distant third with 18 points after losing 2 women from her team and only getting one bonus point from Britt from a kiss.

Amy and Haley then RHAP up the episode as always by sharing tweets and asking Kelley all the burning questions from Rob Has a Planet. Share your thoughts (or emojis) on Twitter or in the comments below. 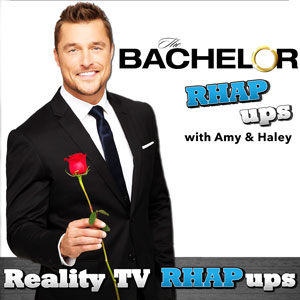