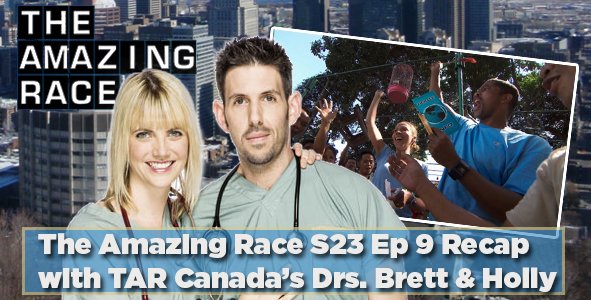 Rob Cesternino (@RobCesternino) and Senior Amazing Race Correspondent Jessica Liese (@HaymakerHattie) are joined tonight by Brett and Holly (@Teampeds) ; the Doctors who were Rob’s pick to win The Amazing Race Canada to recap Episode 9 of The Amazing Race 23, “Part like the Red Sea” which took teams from the United Arab Emeritus to Indonesia.

Jess thinks the most memorable moments from the Ice Queens from the race was being the Race Wives to the Afganimals. Brett feels they will be known as the people who tolerated the Afganimals. All agreed that they were not great to watch though.

Holly and Brett do not think that Nicole’s move to look at Leo’s completed instrument was not cheating. Brett doesn’t feel that the move was a measure of integrity; it is a matter of lowering your morals to get ahead. They feel that there is a lot more pressure on them to live with integrity because of the lives they live.

Brett felt that it was hysterical that on their race, they were brought into the race to be Team Douche, although they were doctors who were going to donate part of their winnings to a Children’s Hospital. Brett feels that he brings a unique edge to the podcast because his season was an entirely domestic season, so they had a completely different experience then what the teams are going through now. He feels he can talk a lot about the personal and intraracer dynamics.

Jessica feels that Nicole’s move is a gray area. It is allowed by the rules of the race, but not allowed by the court of morals. Brett feels it is the kind of thing that would be beneath them as strong racers. He compared this to the behavior on Survivor: Blood vs. Water where the castaways constantly look at each other’s puzzles.

Rob brings up the situation on Survivor Blood vs. Water, where Laura M copied John’s puzzle at Redemption Island.  Brett says it depends on the type of person you are and the role you are cast as. He also compares it to when Gervace was yelling at Kat on what piece fit in what spot being a gray area. Holly brings up the fact that there are judges at each task and there is a phone book sized rule book for the race. Both Holly and Brett feel this makes great television because of the ethical debate regarding it. Brett and Holly used similar tactics to Leo and Jamal where they covered their tracks at challenges.

Brett feels that although the Afganimals are annoying, they are very strategic in their race. He feels that the Canadian viewers are conflicted on what is the definition of a clean race, because they are overly nice people. He calls the move Travis and Nicole made by u-turning the Afganimals a spite move and said that type of move would not have been tolerated by Canadian’s.

Both Holly and Brett feel that blaming the u-turn on the Afganimals lie was a cover up. They feel that they might not have liked them and that using the lie covered their own tracks and made the move seemingly okay to American viewers.

Brett informs us that the post-race interviews take place at the end of the leg at where they come in to the pit stop after all the events of the leg have already happened. Both Holly and Brett feel that the producers lead them to the edit that they want them to have, and select the clip to draw controversy. Holly mentions that they are lead in certain ways by the producers. Brett gives the producers credit though, because they make Travis and Nicole seem exciting. Brett compares watching Travis and Nicole to “Turd watching in an Australian toilet” and says they are unexciting. He suspects very strongly that they have a very strong line of what is moral and immoral because of their field of work.

Should Amy have helped Nicole?

Brett believes that if Amy did not come to Nicole’s race, it’s hard to know if they would have been eliminated. He says that the race is edited to look closer than it actually was. He calls it a calculated risk to help Nicole. Holly says they never would have gone back to help Nicole like Amy did. She would have just given them a tip on their way out the door. Brett brings up fact that the Amazing Race has grown to be increasingly social. He mentions the fact that Express Pass and U-turns are all social tasks and you need to interact with the other teams to really use them effectively and there is a strategic element to being social on the race. Brett feels that since there was no risk to gaining social favor in this situation, they should have done it. He also brings up the fact that Jason and Amy and Nicole and Travis have an emotional connection and that would have coaxed him to make that move.

Jessica agrees with Holly and she would have given her a quick tip on the way out the door, but would not have stopped and helped her. Brett brings up that editing may have made the teams seem closer than they actually were. He feels the better question to think of when you are deciding whether to make the decision is who you want to race with going forward. Jessica compares the move to Richard Hatch taking his hand off of the immunity idol on the first season of Survivor, in which it had a lot of risk, but the potential for reward down the road. She feels that the move was just who Amy is as a person though. Rob calls them a nice team. Brett compares Travis and Nicole to them only more physically fit then they are.

Holly thinks that the racers that are left are the best racers, but not the best television. Brett is impressed by the final four. Brett feels that luck is an unbelievable x factor to the race. He feels that because of luck the strongest teams in his season were all sequentially eliminated. Holly feels that the strongest teams make boring TV because there are no underdogs. Rob feels that the cream has risen to the top with these final four teams. Brett said if there were any other teams of in the final leg, it would have been a shock to have any other teams in those spots.

Brett calls the Butting Rams task as an Active Route Marker because they involve no skills of any kind, just a showcase of local flavor. Both Holly and Brett feel that the Birds task was easier in hindsight, but they would have chosen the elephant task because they thought the Bird task was a lot of luck because it is based on an animal. Holly did not think that Nicole understand the task was about music, since she did not try out her instrument before getting it checked by the judges. Brett brings up that there are a lot of decisions that make or break a game and the decision between Tim and Marie to break the system

Top Four Power Rankings as ranked by Brett and Holly

Brett feels that Tim and Marie have the potential to implode but feels they have been running the race consistently at the front of the pack. They feel that Jason and Amy would be middle of the pack.

1 – Travis and Nicole – They may have had a rough week, but they have got it out of the way.

Brett commends the race for a new task with the choir task, because it is so unique and brings a new flavor to the race. Jessica agrees, but lumps them with other tasks which require musical know how.

Brett and Holly does not feel that the Afganimals move to bribe the train employees make little to no influence and it was edited to make it feel like it was closer than it was.

Brett feels that the lines on what Travis and Nicole feel is integrity is being blurred by the context of the race. He brings up a situation where Brett confiscated all the maps in an airport where no one could know where they were going, but later on says in the same episode that they act with integrity. He feels that they have cleared any bars of integrity that they have set for themselves.

Jessica feels that if Amy helping Nicole was a penalty, they would have gotten one. Brett brings up the gray areas in the rule book by asking if a team asked a cab driver to remove the bags, would that have still counted.

Holly and Brett had a really fun time on the Amazing Race Canada and they made friends with everyone. They made really great relationships with the Tim’s and the Twins. They also bring up how Hal and Joanne were close to them and they had a very complex relationship, but they fell apart.

Join Rob on Wednesday night when hosts Survivor Know-It-Alls. If you have any ideas for a fill in host for the show, let him know via Twitter @RobCesternino. He will also be interviewing Andrea Bouhlke on Thursday for the Survivor podcast. On Monday, he will be interviewing the latest castaway eliminated from Redemption Island.

Don’t go Black Friday shopping in the stores. Do it in front of your computer screen at Robhasawebsite.com/amazon