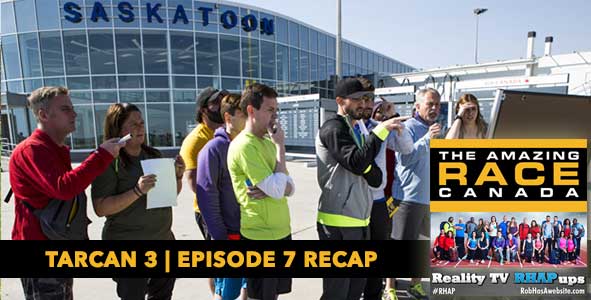 Join Jessica Liese (@HaymakerHattie) and Dan Heaton (@ptsnob) as they recap Episode 7 of Amazing Race Canada Season 3, in which teams visited Saskatoon, Saskatchewan. As the teams explore the Great Western Brewing Company and First Nations culture, Jess and Dan explore the following topics:
* The significance of Saskatoon in the RHAP universe
* How Brian elevated the trampoline Roadblock from a filler task to performance art
* How to get teams to stop taking so many penalties
* The task we thought would break teams, but actually turned out to be a 30-second blip in the episode
* Why Nick and Matt couldn’t seem to achieve the perfect pole position
* Our proposed late-night spinoff of Amazing Race (in which Season 26’s blind date twist would actually be a fantastic addition)
* The nail-biting race for first place, and how it revealed heretofore unknown favorite teams