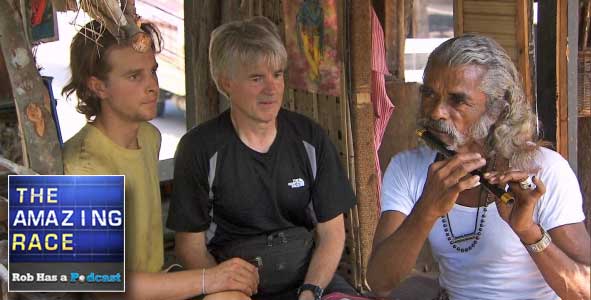 Rob Cesternino and Jessica Liese recap Episode 6 of The Amazing Race 24: Down and Dirty.  Thought Jen and Caroline were the last team to arrive to the pit stop, this week was the second non-elimination leg we’ve seen in the last 3 episodes.

The biggest moments from the first half of the episode centered around Rachel Reilly filling up the green tuk tuks that she saw and not the tuk tuks with the green card in the window.  Rachel lost a lot of time and was on the verge of losing composure before being told by John that she was doing the task wrong.  Once Rachel was made aware of the error, she and Brendon were able to complete the task and get to the train in time to catch up with the other racers.

Rob asks Jessica about her rule about preferring not to work with Animals when it can be avoided on the Amazing Race.  Jessica says that there are times when working with animals is actually okay and she thought that this was one of those times.  While the first four teams all worked with the elephants, we saw the other teams have to make paper out of elephant dung.  While the task did not seem that complicated, the appearance of air bubbles in the paper sheet presented some problems.

Race to the Finish Line

This episode had a number of races to the mat for the different teams.  The Afghanimals would edge out the Cowboys in a sprint for first place.  John and Jessica narrowly beat out Dave and Connor in a race for third place.  Finally, Flight Time and Big Easy made it to sixth before Jen and Caroline who would have been eliminated had it not been a non-elimination leg from the race.

On Monday night at 10 pm ET / 7 pm PT, Rob and Jessica Liese talk with Max & Katie from The Amazing Race 22 to discuss racing with Dave & Connor, John & Jessica, Jen & Caroline and Joey & Meghan.  Hope you can join us LIVE to ask your questions during the show.