Rob Cesternino is joined by Josh Wigler to talk about the announcement of Survivor: Second Chances.

Josh finds the prospect of the audience casting a season as both exciting and frightening. Rob opens an invitation for all 32 possible contestants to come onto Rob Has a Podcast for an interview and Josh explains the voting process. Rob and Josh then go through the 32 people in the running to return to the game:

Ciera Eastin from Blood vs. Water: Rob is not surprised to see her back. Josh thinks Ciera is one of the more memorable players from recent seasons, especially because she voted out her mom. Josh thinks Ciera has good chances to return and play well.

Kass McQuillen from Cagayan: Josh and Rob think Kass is another shoe-in to return. Josh says Kass brought a lot to Cagayan to make it one of the best modern seasons. Josh and Rob wonder how much Kass can work on her social game.

Monica Padilla from Samoa: Rob finds Monica to be one of the more intriguing players on the list because she was mostly invisible but towards the end of her run she went up toe-to-toe with Russell Hantz. Josh thinks the less known people do well in All-Stars seasons so she could do well. Rob wonders if she could have a bond with Ciera since Monica was close to Laura Morett during Samoa.

Natalie Tenerelli from Redemption Island: Rob sees Natalie as another non-entity on the list but she learned from a master in Boston Rob. She also has a lot more life experience than when she played four years ago.

Peih-Gee Law from China: Josh is a big Peih-Gee fan. Rob thinks it would be fun to see her because she is one of the more forgotten players but had a lot of signs that she could play well.

Sabrina Thompson from One World: Josh thinks Sabrina is underrated because she was in a season dominated by Kim Spradlin. He hopes Sabrina will have more of a killer instinct next time around.

Stephanie Valencia from Redemption Island: Rob and Josh thinks Stephanie is one of the more surprising members on the list. They think she might bring some Russell Hantz-like play and could have a bond with Natalie.

Tasha Fox from Cagayan: Rob thinks Tasha will campaign hard because she campaigned hard for Ms. Survivor. Josh thinks Tasha has a great shot to win.

Teresa ‘T-Bird’ Cooper from Africa: Josh and Rob are both excited to see T-Bird back. Rob thinks Teresa should have been on the first All-Stars. Josh points towards her lies to Lex as why she is a deadly player.

Kelley Wentworth from San Juan del Sur: Rob and Josh are happy to see her on the list. Josh is surprised to see her back. Rob thinks she will campaign hard to get back in.

Kelly Wiglesworth from Borneo: Both guys are extremely excited to see Kelly back. They think Kelly is a lock to get back onto the show. Rob thinks watching her will be fascinating, but thinks she might not know the other players in the game.

Kimmi Kappenberg from The Australian Outback: Rob finds it funny that Kimmi and Jeff Varner can appear on the same season. Josh will be voting for her.

Mikayla Wingle from South Pacific: Rob says she was tough in competitions and her downfall came from Brandon Hantz.

Shirin Oskooi from Worlds Apart: Josh thinks Shirin will be back and be able to keep her head in the game better than the current season.

Abi-Maria from Philippines: Josh doesn’t think Abi could win but will provide a lot of entertainment.

Jeremy Collins from San Juan del Sur: Josh and Rob think he is a tough player who knows the game.

Jim Rice from South Pacific: Josh says he wrote a blog during Caramoan saying Jim could have taken Brandon’s spot. Josh and Rob think Jim and the other players from the low 20 seasons will have trouble getting voted in.

Keith Nale from San Juan del Sur: Rob was surprised to see Keith on the list, while Josh thinks he’s a lock to return.

Shane Powers from Panama – Exile Island: Josh thinks it would be wrong for Shane to not return. Both guys are excited to see Shane back.

Stephen Fishbach from Tocantins: Rob thinks Stephen being on the show is a win-win because it will be fun to see watch him whether he plays well or poorly. Josh was impressed by Stephen on his recent rewatch despite Stephen losing the jury vote seven to nothing.

Jeff Varner from The Australian Outback: Rob thinks this is another spot where production is writing a wrong for never bringing Jeff back. Josh says Jeff could have done well had things gone a little differently.

Joe Anglim from Worlds Apart: Rob sees Joe as another lock to return.

Max Dawson from Worlds Apart: Rob and Josh are both surprised to see Max on the list. Josh says he went out early, but his exit was great. Rob says this shows that production did well

Mike Holloway from Worlds Apart: Rob and Josh feel Mike is a lock if he doesn’t win.

Spencer from Cagayan: Josh and Rob think Mr. Survivor is another lock to return.

Troyzan Robertson from One World: Josh says Troy was one of the few people standing in the way of Kim Spradlin, but his temper got in his way. Rob thinks Troy makes good TV.

Woo Hwang from Cagayan: Josh thinks Woo is another person who needs a second chance because of his awful decision at Final 3.

Terry Deitz from Panama – Exile Island: Rob thinks this is another correction by production. Both guys want to see Terry back.

Andrea Savage from Pearl Islands: Rob talks about Savage always being a name in the pool to be brought back. Josh and Rob both said they didn’t need to see Savage back during The Evolution of Strategy.

Brad Culpepper from Blood vs. Water: Rob thinks Brad is interesting because Brad has recency bias but was a villain and a pre-merge boot. Rob doesn’t see the sports vote coming into play.

Vytas Baskauskas from Blood vs. Water: Rob says Vytas has a lot of ties because he played with Brad and Ciera and his brother played with Shane and Terry. Josh would love to see Vytas return and play without a loved one.

Rob and Josh close out the show by talking about some of the people they’re surprised to see not on the ballot.

Thanks to Kyle Faber for tonight’s episode recap 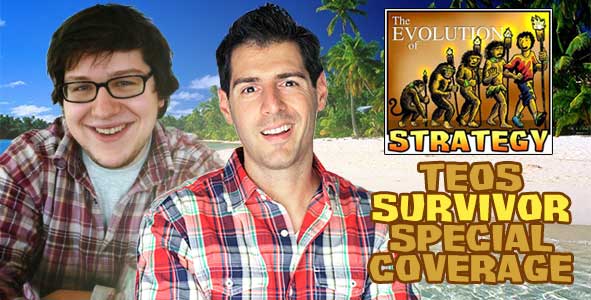