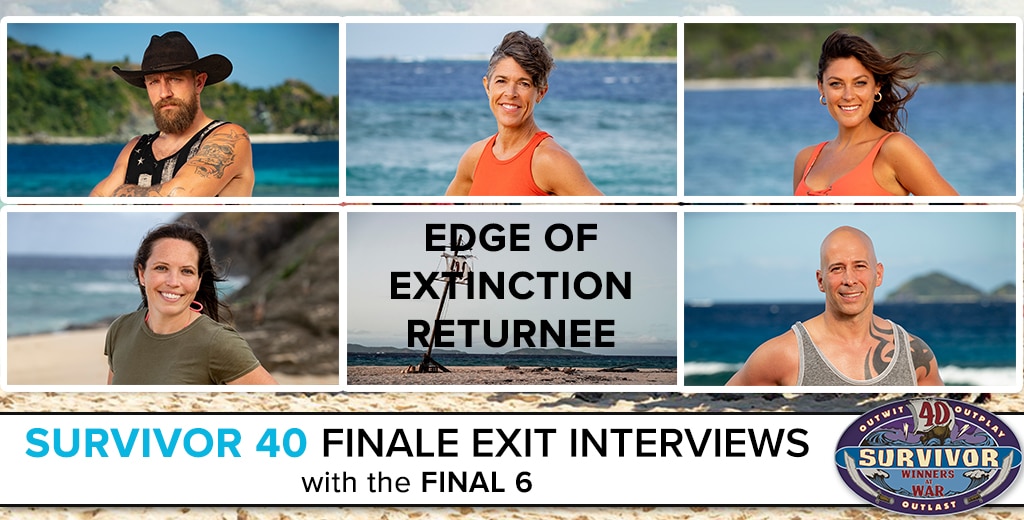 Rob Cesternino brings you exit interviews the day after the finale of Survivor: Winners at War with the winner Tony Vlachos, runners-up Natalie Anderson and Michele Fitzgerald, and finalists Sarah Lacina, Ben Driebergen, and Denise Stapley to break down all their games, strategies, and decisions from the finale and the whole season.

First, Rob speaks with the winner of Survivor: Winners at War Tony Vlachos. Tony was a 45-year-old police officer from Allendale, New Jersey. Tony is now the second two-time winner of Survivor and played under-the-radar at the beginning to make great social bonds and then turned up his strategy while winning four immunity challenges to get all the way to the Final Tribal Council without a single vote cast against him and ultimately win the title of Sole Survivor in an 12-4-0 vote.

Second, Rob speaks with the first runner-up of Survivor: Winners at War Natalie Anderson. Natalie was a 33-year-old CrossFit trainer from Edgewater, New Jersey. Natalie was the first person voted out on day 2 due to her tight alliance with Jeremy, accumulated several Fire Tokens and advantages on the Edge of Extinction which helped her win the re-entry challenge on day 35. Once she got back in, she played two idols and won individual immunity to get to the Final Tribal Council, but she only earned 4 votes.

Third, Rob speaks with the second runner-up of Survivor: Winners at War Michele Fitzgerald. Michele was a 29-year-old business development manager from Hoboken, New Jersey. Michele played an under-the-radar and very strong social game that let her get through the game. Michele then showed her strength in the challenges, winning two immunity challenges. She ultimately earned no votes at the Final Tribal Council.

Fourth, Rob speaks with the 4th place finisher of Survivor: Winners at War Sarah Lacina. Sarah was a 34-year-old police officer from Cedar Rapids, Iowa. Although she was a popular target preseason, she made strong alliances, including reuniting “Cops R Us” with Tony that got her through a majority of the game. She received a vote steal advantage from Natalie early on, and used it against Denise at the final 10. She ultimately lost the fire-making challenge to Tony on day 38, and became the 16th member of the jury.

Fifth, Rob speaks with the 5th place finisher of Survivor: Winners at War Ben Driebergen. Ben was a 36-year-old real estate agent and stay-at-home dad from Boise, Idaho. Ben made some very strong alliances and helped his allies find an idol before he even found one later in the game. He then gave Sarah permission to vote him out, which is what sent him home on day 37, making him the 15th member of the jury.

Lastly, Rob speaks with the 6th place finisher of Survivor: Winners at War Denise Stapley. Denise was a 48-year-old therapist from Marion, Iowa. Denise evaded trouble on day 2, found an idol, and used an idol given to her by Sandra to vote her out. Denise won two immunity challenges and made great relationships, but ultimately went home after there were no counted votes cast in the first round of voting at the final six, making her the 14th member of the jury.

Schedule of the RHAP Survivor: Winners at War FINALE Podcasts