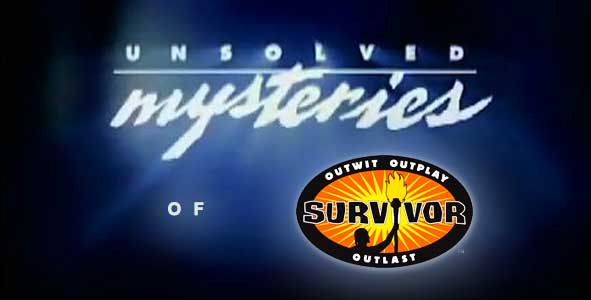 Your off-season Survivor coverage continued this week with Rob Cesternino and Gordon Holmes taking a play off of the early 1990’s TV show Unsolved Mysteries. They discussed the biggest unsolved mysteries throughout the 28 seasons of Survivor.  Gordon hoped to receive the opening disclaimer bumper a la Russell Hantz for all the f-bombs he planned to drop, but (spoiler alert) there was no cursing.

Both Gordon and Rob agreed that Unsolved Mysteries was a show they found spooky back in the day.  Despite that, they forged ahead, unearthing several of the unanswered storylines from the world of Survivor.  Much like the original show, they didn’t expect to come up with any definitive answers.

They start off with a mystery from Survivor: The Australian Outback.  The Ogakor Tribe spotted a strange brown substance that tribe member Kel Gleason was eating, which was believed to be beef jerky.  Kel claimed it was a blade of grass, and denied that it was beef jerky even at the finale.  Gordon mused about many ways he’s heard of sneaking food onto the show, like sewing it into the waistband of the pants.  Jeff Probst himself told Gordon that he believed Kel to have had the beef jerky.  Probst also went on to tell Gordon that a contestant on a different season was caught smuggling something onto the show in their backdoor region.  Rob confirmed this, knowing that it was Richard Hatch sneaking in a film canister full of matches in Survivor: All-Stars.  Both Rob and Gordon believed that Kel had the beef jerky, though it remains unsolved to this day.  Gordon went off of the word of Jeff Probst, while Rob heard from multiple people from that season that it was true.

The second Survivor unsolved mystery is actually several different incidents from Survivor: The Amazon.  In the second episode at the women’s camp, a granola bar was found in a crate where they all stored their packs.  Janet ultimately took the fall for the incident, though she had denied it.  Rob, having been on the season, heard quite a few theories about this.  Most intriguing perhaps was Alex Bell’s take, which was that production had planted it there for drama.  Rob feels that other than Janet, there were three other potential culprits: Joanna, Jeanne and Christy.

Another mystery in the Amazon had to do with Christy’s vote at the final tribal council.  She declared when voted out that she would never give the million dollars to Jenna, yet voted for her to win.  The question was whether she welched or she thought she was voting against Jenna.  Rob thinks it’s possible that he inadvertently fueled the rumor that she voted in mistake in an interview at the time with Howard Stern.

The guys then offered up a missing persons report:  Colleen Haskell from Survivor: Borneo.  After being one of the most popular people on television during her stint on the show, she rapidly ascended to leading lady in the major motion picture The Animal, alongside Rob Schneider in 2001.  She was last heard working on the other side of the camera during the mid 2000’s, but since then, nothing.

Next, they went on to discuss several smaller mysteries.

Gordon shared how he had asked Jeff Probst what would actually happen in the event of a tie at the final tribal council.  Probst assured him that there is a plan in place, but it wouldn’t be revealed until a tie actually happens.  Both Rob and Gordon had several ideas as to how they would handle it, but this too remains a mystery.

They then tackle the question: why do Parvati and Amanda seem to not like each other?  Gordon had broached the subject in an interview with Amanda after Heroes vs. Villains, and she said that they just didn’t trust each other, particularly after that season.  Rob has had a chance to ask both of them this question, but had received vague answers from each.

In Survivor: Nicaragua, there was a question as to what happened with Sash and Jane.  It was believed that Sash had offered to pay off Jane’s mortgage if she would throw a winning vote his way.  Gordon heard that this incident may have further soured the jury against Sash, but no one has confirmed if this offer indeed happened.

Lastly, in Survivor: Cagayan, several players were referring to Woo after the season as Weasel Woo, particularly Kass and Trish.  Gordon and Rob pondered whether they thought this because Woo was Tony’s right-hand man, and was a bit of a weasel himself.  A straight answer to this question was never revealed either.

Special Thanks to Mike Moore for this week’s episode recap!