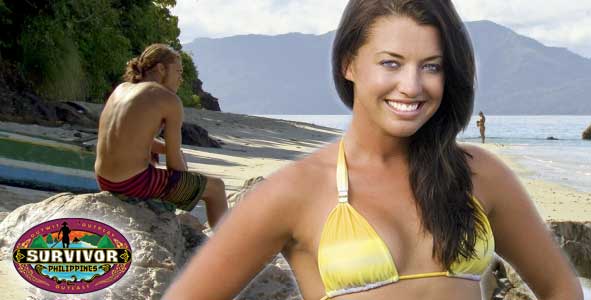 The winner of Survivor Fans vs Favorites and the reigning Miss Survivor, Parvati Shallow joins Rob Cesternino to discuss the landscape of Survivor Philippines heading into the finale. Rob and Parvati discuss Parvati’s love for this season of the show after not following Survivor as closely over the past few seasons. Parvati really loves the characters on this season of the show.

Rob starts off by discussing the decision by the final four to not take Abi-Maria Gomes to the finals. Parvati said that she always has played the game as somebody who wants to win the game and take the players that can be beat – not who would be the most honorable to go up against in the finals.

Rob brings up Malcolm Freberg saying that he is a triple threat in the game, much like Parvati. Rob wants to know what Parvati thinks about his plans and why he didn’t vote out Denise Stapley this week. Parvati doesn’t understand why Malcolm would keep Denise around and then not give her one of the hidden immunity idols. There is some information that we didn’t see about why Lisa Whelchel, Mike Skupin and Malcolm went away from the plan created on the boat during the reward challenge. Rob gets Parvati’s take on Abi-Maria as well. Like Rob, Abi-Maria grew on Parvati over the course of the season.

Rob and Parvati try to get a good feel for what is going to happen on Sunday. Rob is very confused because there is not normally a four person finale episode when it is a final 3 on the show. Rob is very disappointed that Jonathan Penner didn’t make it to the final tribal council because that had a lot of potential to be great. Rob and Parvati discuss which are the players they could see winning the game. Rob thinks that the winner of this season will be either Malcolm or Lisa.

After Parvati discusses a number of topics with our questions from Facebook, including Miss Survivor 2013, Rob has a sudden realization about the real reason that the finale episode is being structured this way. Finally, Rob wraps up the show by listening to your voicemails and discussing what the Survivor players have been saying on Twitter.