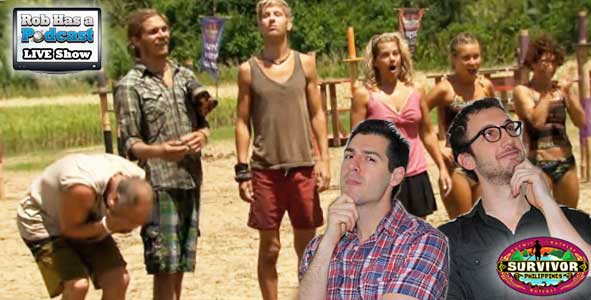 Rob and Stephen Know-It-All about Survivor

At the top of the show, Rob and Stephen are both incensed that the people left in the game seem to be struggling about what is best for their game versus best for their heart. Stephen is especially irritated by Lisa Whelchel, going as far as to say she is the most annoying player in the history of the show. Rob and Stephen then talk about Lisa’s emotional reaction to seeing her brother during the loved ones reward challenge.

The Know-it-Alls have many differing opinions on tonight’s episode. They debate whether or not Malcolm was really considering voting out Abi. They also disagree over how Carter was playing. Stephen thought Carter was smart to appeal to the other players’ emotions, while Rob thought Carter didn’t have any grasp of strategy or how he could try to remain in the game.

Next they talk about the history of Survivors talking strategy with their loved ones throughout the seasons of the show– such as Kathy and her son in Marquesas, Helen and her husband in Thailand, and Shawn Hantz in South Pacific. Stephen also reflects about his brother’s visit in Survivor: Tocantins.

Stephen and Rob have differing opinions about how frustrating Lisa is as a player. They discuss why Skupin and Lisa couldn’t have voted out Denise because Malcolm will still be safe next week with his idol and would likely align with Carter and Abi. Rob also wonders if Malcolm and Denise should have considered eliminating Lisa or Skupin, but Stephen thinks they are perfect jury goats.

They also talk about the misleading preview that suggested Malcolm’s brother was going to say something horrible to offend the tribe, and break down Malcolm’s decision of selecting Lisa and Skupin for the loved one’s visit. Stephen thought it was a huge mistake of Malcolm to not be hanging out with Lisa, Lisa’s brother, Michael Skupin and his son. He thought he should have infiltrated their prayer circle rather than separate from them. Rob advises not winning a reward challenge– it is better to be chosen to go along on the reward. Otherwise it’s a lose-lose situation if you have to pick people to join you on reward.

They wonder if Mike will be in some hot water in his household after saying that his oldest son is “the best human being he knows.” Rob thinks that he has figured out that Skupin is very impulsive– and whatever he has in front on him, such as the wine and cheese last week, he has to have.

Rob and Stephen are also struck by how odd it is that the players talk honestly about who they are voting out, in front of their intended target, as Michael and Malcolm did to Carter.

Rob and Stephen announce that they will be doing a live Survivor Know-it-Alls after the  Survivor finale– they feel it’s where they belong!

Then Rob does a run-down of different Hidden Immunity Idol strategies using impressions of Abi, Rupert, Boston Rob and Russell to illustrate his point. Abi’s technique of talking about an idol without showing it is not a viable option.

Then Ian Terry, Big Brother 14 winner, joins the conversation. They talk about whether God has a vested interest in reality shows. Ian says God roots for Survivor in real time, as though he has the SuperPass Live Feeds.

Ian, Rob, and Stephen debate who they think will win Survivor. Rob sticks with his pick for Denise, while Stephen says Malcolm and Ian picks Skupin. Ian and Stephen bet $5 over whether or not Skupin will win.

Rob and Stephen talk about the family visit– Stephen says he almost always gets teary-eyed watching the family visits. Rob says he doesn’t get teary-eyed when he watches them, but he would get teary-eyed if he was experiencing a family visit, as he did in Amazon. Stephen says they discussed having him as Courtney’s loved one in Heroes vs. Villains, but ultimately they thought it would be an unfair advantage to have a former Survivor visiting. Stephen says he thought it would’ve been funnier to be J.T.’s loved one. They make guesses as to who will be the first former Survivor to appear as a loved one.

Stephen and Rob debate whether Denise would turn on Malcolm– Rob thinks she doesn’t have it in her, but Stephen thinks she wants to win and would do so if she gets the chance.

Tomorrow Rob will be talking with Carter in his exit interview and will be podcasting with Jenna Morasca about this week’s episode. Also check out the website tomorrow for a new Tundra CAPtion contest photo, and be sure to download the free Episode 1 commentary for Survivor Amazon.