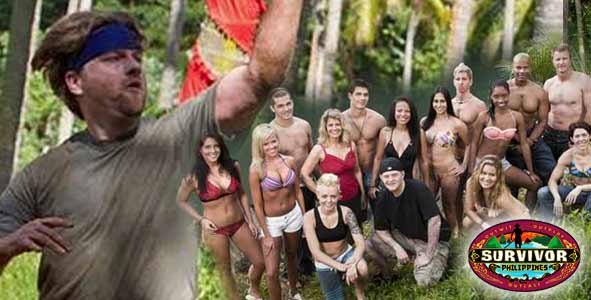 Will Gordon Holmes one day be inducted into the RHAP Hall of Fame?

Gordon Holmes covers the Survivor beat for Xfinity TV and was in the Philippines to meet the cast of the current Survivor. Hear what Gordon thinks about how this season has turned out, what’s in store for the Survivor Hall of Fame and what Gordon’s take is on the future of Community on a special Holmes cast.

The show starts with some stories about Gordon’s experiences being out on location in the Philippines for the first three days of the game. Gordon says he saw a lot of potential from the cast in the time he spent and it’s by far the best season he’s ever been on location for, the others being Survivor: Gabon, Survivor: Nicagargua and Survivor: South Pacific.

Gordon was relieved Jeff Kent’s biography listed him as a former baseball MVP because he wouldn’t have recognized him otherwise. Oddly enough, Lisa Welchel’s biography mentioned nothing about The Facts of Life. Gordon prides himself on being the person on the media crew to discover her secret. Rob and Gordon agree that Lisa and Jeff playing so hard this season is a good sign to look out for more celebrity casting in the future. They think it’s a positive for the show as long as the celebrities in question are also fans of the show who know the game.

Gordon tells a story of almost injuring upcoming Survivor Jepordy contestant Sarah Dawson. Gordon points to Angie Layton as the person the rest of the cast was already targeting before the game started due to her larger than life apperance and presence. Pete Yurkowski followed his strategy he outlined to Gordon in his interview perfectly, forming a strong bond with a female member of the tribe and trying to run the game with them. Rob and Gordon joke about what a terrible alliance partner Abi Maria Gomes ended up being. Gordon sees Pete as a cautionary tale about not aligning with people before you get to know the type of person they are. Both agree Angie would have been the perfect person to fit into his alliance.

Gordon claims Jeff Kent was one of the only people to pick up that the game was going to start with three tribes and returning players. Gordon tells of his experiencing running the first challenge. Gordon’s struggles running challenges serves as a sign to him that returning players have a significant advantage just due to being familiar with the way the challenges are conducted. He also reveals fellow Survivor journalist and RHAP guest Dalton Ross is a great swimmer and is nicknamed the “Dal-Phin”.

Rob gets into the crazy post-merge dynamics of the season. Gordon was shocked that Jonathan Penner didn’t accept the final three offer from Mike Skupin and Lisa Welchell. His only theory was that he was holding out on dragging Abi-Maria to the end as a goat. Rob doesn’t think that’s the case, citing Penner casting a vote in Abi’s direction a couple tribals earlier just for pissing him off. Rob wonders if he’s playing more like Sandra Diaz-Twine and adopting an “anyone but me” strategy. Rob doesn’t think he’s against making a move, he’s just afraid to do anything that might point a target on his back.

Gordon feels that Mike Skupin’s got such a reputation as an injury-prone goofball that he’s got more freedom to move around in the game and not get a target painted on his back. Rob says that a lot of Survivor seasons come down to the final five with two pairs and a swing vote, and we might be heading in that direction yet again with a final five made up of the pairs of Lisa/Skupin and Malcolm Freberg and Denise Stapley with someone in the middle. Rob cites Big Tom in All Stars and Kathy Vaverick O’Brien in Survivor: Marquesas as people in the swing vote position who botched their game by siding with the wrong pair.

Gordon and Rob continue the ongoing speculation about if this season is headed towards a final two end-game. Rob thinks it would be great for the show to introduce the final two into the mix every so often just to keep players on their toes and force them to try to better their positions as to avoid the post-merge Pagongings we’ve witnessed the last few seasons. Gordon agrees but thinks players should be warned in advance if there’s a final two, citing Cirie Fields untimely exit in Survivor: Micronesia.

Rob turns to Gordon to give his power rankings for the final seven this season. He thinks Abi Maria and Carter Williams are at the bottom of the pack. He also thinks Skupin is low on the list due to potentially lost jury votes. He believes Lisa Welchel can get away with flipping on the Abi/Pete/Artis trio more due to Abi Maria’s irrational paranoia. Gordon has Malcolm, Denise and Penner at the top of the pack with Denise as the number one power player. Rob thinks Penner was ranked too high and would switch him and Mike Skupin.

The discussion turns back around to Penner refusing Skupin and Lisa’s final four alliance. Rob thinks he’s trying to play a zen-like game and not ruffle a lot of feathers, citing the very hostile reaction he got from the Cook Islands cast for flipping on his alliance the first time playing. Gordon’s still in shock that he wouldn’t commit with so few people left. Gordon says Penner has turned himself into a Jimmy Johnson by not wanting to talk alliances, saying that was the reason Marty Piombo voted him out early on.

Rob and Gordon turn to the 2012 class of the Survivor Hall of Fame. Rob thinks there was a bit of a recency bias with Ozzy Lusth making it into the Hall of Fame so soon after South Pacific aired. Gordon disagrees and says Ozzy came close to making it into the first class. Gordon laughs about how people don’t follow some of the rules when it comes to voting for inductees even when they’re clearly listed on the website. Rob opens up a discussion on how to improve the format of the Hall of Fame.

Rob wonders exactly how many times people are allowed to vote when Gordon warns people every year to “vote early and vote often”. Gordon says it hasn’t been a real issue yet and thinks there’s so many votes that a few repeat votes don’t change the overall tally, he also points to the executive committee as a way to prevent prank votes from getting through.

Rob takes a somewhat controversial stance and states that former Hall of Fame inductees shouldn’t be allowed to vote, claiming that some of the people don’t know a lot of Survivors outside of their initial seasons. Rob also worries about peer pressure playing a part in who people will vote for. Gordon doesn’t think it’s a big issue, saying Russell Hantz’ vote for Stephenie Valencia has been the only abnormal executive vote they’ve come across so far from a former Survivor. Rob teases about an evolution coming to the rules of voting for Miss Survivor, most notably limiting the ballot to women who have played Survivor in 2012 making the contest a true statement of who represented the show best in any particular year.

The show wraps up with a talk about the future of Community. Rob laughs about just how much of a beaten the show has gone through in the last year with a time-slot constantly in flux, with the announcement that Chevy Chase was leaving the show potentially being the nail in the coffin. Gordon thinks a lot of Chase’s material was already shot and doesn’t worry too much about that, but feels the show’s been off the air for so long it already feels dead. He also thinks the new producers will try their hardest to recapture the original tone of the show. Gordon has gotten past hoping Community does well in the ratings, instead crossing his fingers for all the other NBC comedies imploding around it leaving NBC no choice but to keep it on the air.