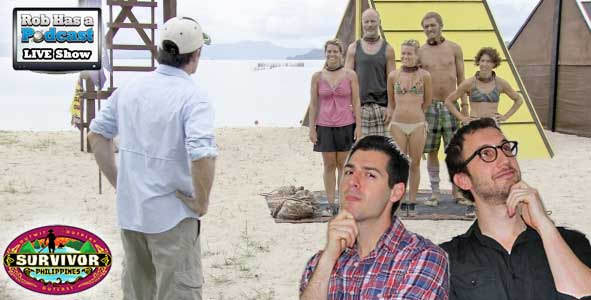 Watch the Know-it-Alls recap Survivor and preview the finale.

This edition of Survivor Know-it-Alls is auspicious not only for its 12/12/12 date, but it is Rob’s first appearance on the show as a Survivor Hall of Fame 2012 inductee. Rob also has big news that he will be doing the Sunday Know-it-Alls live from the CBS Finale in Los Angeles, while Stephen will provide his trusty east coast coverage as usual.

Rob also reminds listeners of his RHAP fan favorite endorsement of Jonathan Penner for all the good TV he has provided over three seasons.  Click Here for vote for Fan Favorite

Rob and Stephen then break down the decision to send Abi-Maria home, which they don’t understand. Stephen thinks Lisa chose a guaranteed spot in the final 3 over an increased likelihood to win. Stephen and Rob also discuss whether it might be a Final 3 or a Final 2. Stephen has been focused on it being a Final 3, but Rob isn’t sure how they can fill two hours with only one elimination on Sunday. Rob also wonders if Denise is as big of a jury threat as the other players have suggested.

They also talk about Malcolm’s puzzling behavior on this episode. First he makes a Final 3 deal with Skupin and Lisa. Then, he tells Denise he doesn’t need to give her the idol, yet he doesn’t vote for Denise to go home. Stephen thinks there doesn’t seem to be any good reason to keep Denise except that she’s less annoying than Abi.

Even though Denise was Rob’s pick to win, he hasn’t been all that impressed with her game play since the merge. He couldn’t believe that while she and Abi were alone after the reward challenge, she wasn’t talking strategy with Abi. Stephen thinks she seems un-strategic because we haven’t seen a lot of her decision-making. Stephen agrees with Rob that her attitude toward Abi is ridiculous– as a therapist, she should have been able to find common ground with her and tolerate her more.

Next, the Know-it-All’s discuss whether Abi had a legitimate chance to win if she made the final three, and whether or not Penner was flipping anybody off during Tribal Council. They also ponder whether Malcolm should have made a play to get rid of Michael Skupin. Rob and Stephen talk about how Lisa seems to have an epiphany on every episode that she is actually playing a game, yet never seems to make any moves.

Then Rob takes the discussion to the white board to break down hypothetical Final Jury votes with different combinations of players in the Final 2 or Final 3. They determine Malcolm would run away with the win if he makes it to the end.

Next, Stephen and Rob discuss a point raised by Baker’s Dozen blogger, Andy Baker, about whether the middle of the game or the end of the game is harder. They also talk about Lisa’s comment about Tandang’s wins during tribal council and if that was a ploy to win jury votes.

Then Rob and Stephen draft selections for who will get ignored by Jeff Probst at the reunion. Stephen picks Roxy, Dawson, Artis. Rob picks Katie, Pete, and Zane.
Be sure to listen to the podcasts tomorrow– Rob will be talking to Abi-Maria for an exit interview and doing a full podcast discussing the episode with the reigning Miss Survivor Parvati Shallow. And don’t forget to tune in live to the Survivor Know-it-Alls finale episode on Sunday.

Rob ends the podcast thanking fans for the Survivor Hall of Fame votes and support for the podcast, and then teases some upcoming shows: a RHAPpy Holidays show next week as well as a Brenchel wedding podcast.