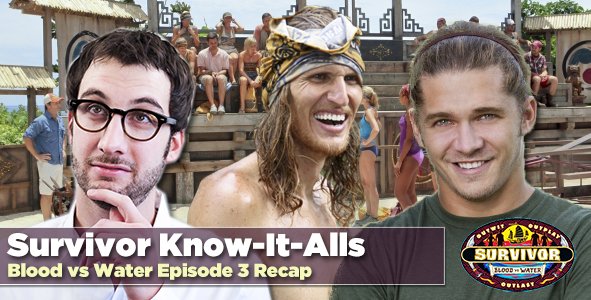 While Rob Cesternino (@robcesternino) takes a brief podcasting hiatus to become a parenting know-it-all, Stephen Fishbach (@stephenfishbach) is at the wheel with special guest Malcolm Freberg (@MalcolmWHW) on deck for a live edition of Survivor Know It Alls!

Stephen says he wasn’t actually sure whether or not John Cody would go home until the very end of the episode, and Malcolm agrees. He was sad to see John go, proudly displaying the picture he has of him with hearts drawn around it and now stained with tears. Malcolm admits that when you really unpack it, getting rid of John was the right decision and Stephen agrees considering he feels John couldn’t have handled the situation with the immunity idol any worse. Malcolm revisits what Stephen discussed with Rob last week – that receiving a clue to a hidden immunity idol publicly makes it impossible to get away with not sharing that information with your alliance. Considering this week he now had two clues and thus a better chance of having found it, Malcolm feels John was untrustworthy and understands why Brad would want to lead a charge against him, even if he still doesn’t have a very good read on Brad as a strategist.

But at the start of tonight’s episode, we said goodbye to Colton Cumbie once again, and according to Jeff Probst, we watched him quit the game once again. Malcolm was very surprised to hear Jeff throwing around accusations of Colton faking the appendicitis that allegedly took him out of Survivor: One World, even though he knows it’s always been a common rumor in the fan base. Stephen also felt surprised, saying that Jeff rained hellfire on Colton in tonight’s episode. He and Malcolm both thought it was poorly handled though because Jeff is an executive producer and if he a) hates quitters, and b) knew that Colton had faked his illness to leave the game, why did he bring Colton back at all just to berate him on national television for quitting again? Malcolm thought it was almost breaking the fourth wall and destroying the story Jeff created for the show as an EP.

In terms of gameplay, Stephen and Malcolm were also confused why Colton would have faked his injury the first time, considering he was running the show on One World. This seemed like an entirely different playing field for Colton this time so neither Know-It-All is really sure what was going through his head. Both also thought it was funny that Caleb didn’t even try to convince Colton to stay, even casually telling him “see ya on the flip side” as he walked off Redemption Island. In addition, Tyson opted not to switch with Rachel at the truel, and Malcolm understands Stephen’s point of view on this – why risk losing everything on the chance that one challenge you’re not good at can get thrown your way?

Speaking of challenges, this week’s physical immunity challenge pitted siblings against siblings and parents against children and was not the most physically aggressive challenge as a result. Stephen and Malcolm understand this though, both saying they couldn’t go against their moms at a challenge and would likely want to just let them win, even if meant facing the scorn of their tribemates. Stephen and Malcolm both thought Vytas’ response to losing to Aras was kind of sore loser-ish, dismissing Aras’ win as inevitable because he was the college athlete.

To wrap up the show, Stephen and Malcolm take questions from the live chat. What does the future hold for Brad – is there a future at all for him in this game? Which Laura will be the first to fall? Is it already time to switch up the tribes? Who was awarded the first ever “Malkey”? Plus, hear some behind the scenes details on Malcolm’s own experience dealing with blood vs. water – it’s only on Survivor Know It Alls!