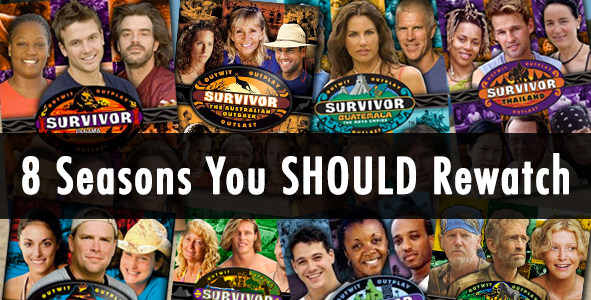 On your weekly Survivor podcast, the bridge to the return of Survivor this fall, Mike Bloom from Survivor Historians and RHAP’s Last Comic Standing podcast sits down with Rob to share his list of the 8 Survivor seasons you SHOULD go back and watch. For the RHAP listeners not tuning into Big Brother this summer, Mike’s list highlights seasons of Survivor that may not get talked about much, but proved to be great watches the second time around. He gives his list in chronological order rather than ranking them.

Mike finds this to be the “perfect movie sequel” to Survivor: Borneo. Despite it’s reputation as being boring to watch now, it solidified the game of Survivor as we know it. The characters were entertaining, providing a good chunk of players that would return in following seasons. The brutal conditions and malnourishment of the tribe in the second half of the show really drove home the survival aspect. Also, it was the first time we see a player (Colby) make a change in alliances to play with a more strategic group. Mike also added that Tina’s game can be looked upon as much craftier in “The Outback” after watching her in “Blood vs. Water”.

The original version of Boston Rob is Mike’s favorite. Besides his huge character, another great player in Kathy Vavrick-O’Brien set a precedent for other older women to excel in the game. Another aspect that made this season one to watch is seeing for the first time an “alpha male” player get the boot (Hunter), rather than the tradition of choosing a weaker player. Though some have criticized the final few episodes, Mike found this exciting with a great cast.

Noting it is a controversial pick, as it has been lauded by many as the worst of all the seasons, Mike found a fondness for season five when watching it again. Brian Heidik’s game was perhaps the most dominant of all Survivor players, and is considered so because of the strong characters he played against.

This season took a hit in reputation as one of the more boring seasons, but after 10 years since it aired, Mike appreciated it on this go around. Mike found the story line of Chris rising from the ashes amazing. His worming and talking his way through the dominant woman’s alliance to stave off elimination and win the game makes him an underrated winner. There were many great characters on the season as well. RHAP friend Eliza Orlins making it to the final four after being a target since the second episode was another highlight. Amy, Bubba and Twila were a few others Mike said had a positive impact on this season.

Mike considers this the most underrated season of Survivor all time, with the defining cast of characters, being set in one of the coolest locale’s, with a ton of great challenges. Mike goes on to list several of the players and their accomplishments. He noted that Danny played an under the radar game, Stephanie’s return to the game saw her transform into a more evil version of herself. The unassuming Rafe turned into a power player, then let morality lead to his undoing. Judd cemented his spot in the group of players you love to hate. And Gary Hogeboom, the ex-NFL quarterback was the first to ever find a hidden immunity idol.

The 12th season was another strong group in Mike’s opinion. The comedy, both intentional and unintentional made him put “Panama” in his top seven most entertaining seasons. He said Aras was a strong character, comparing him and his role with his tribe to that of Michael Bluth from Arrested Development. He applauded Cirie’s storyline as the couch potato turned strategic mastermind. He closed his recommendation by noting that watching Shane and Courtney argue is reason enough to watch again.

Mike feels that Gabon is a rather forgotten season among some of the stronger surrounding it. Initially deeming it his least favorite when it first aired, he really enjoyed it the second time. From Ken and Crystal forming an unlikely alliance, to Randy and Corinne’s antics, the cast of characters was quite good. In addition, Gabon was the perfect setting for Survivor‘s first season in high definition, and the challenges were elaborate and exciting.

Loving an all “newbie” season anyway, and following on the heels of “Heroes vs. Villians”, season 21 was an exciting one for Mike. He said it provided a well-balanced final three, and had a great cast. Fabio was a true goof ball, but a challenge beast, Chase (Let’s Get Weird) Rice almost seemed challenged by the game, and Sash’s sleazy used car salesman act were very entertaining to watch. Other great castaways were Holly Hoffman and RHAP friend Marty Piombo.

Rob asked Mike “gun to his head” which season would be the go-to on his list, and he chose Guatemala, with Exile Island a close second. Also, Mike picked Survivor: Cook Islands as the season he would recommend least to go back and watch, deeming it overrated.

Catch next week’s Survivor podcast when Rob sits down with Miles Nye, a former consultant for the Survivor challenges team. Rob Has a Podcast has a new twitter handle for all your podcast specific information @robhasapodcast, and you can follow Mike Bloom @amikebloomtype.

Special Thanks for today’s episode summary by Mike Moore

2 Ways to Rewatch and Support RHAP:

– Season 1 through 18 are available on DVD from Amazon

Get a Two Week Free Trial of Hulu Plus – See Season 1, or 12-26 on demand for $7.99 a month after your two week trial ends using our link HuluPlus.com/Rob