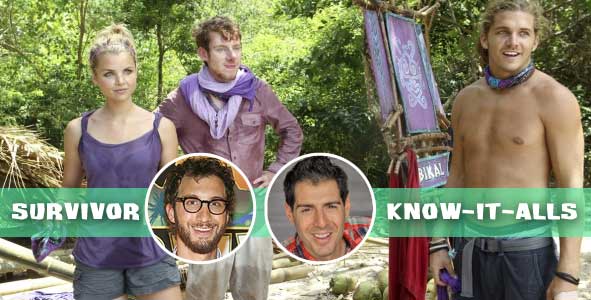 Stephen and Rob without a doubt, have got the game all figured out.

Survivor Know-It-Alls is back for a second season with returning favorites Stephen Fishbach and Rob Cesternino, discussing the exciting premiere of Survivor Caramoan: Fans vs Favorites. They start out talking about the harsh outcome for Francesca Hogi, who pulled a “reverse Sandra” by becoming the only person to be voted out first twice. Rob and Stephen want to answer the question of whether this means Francesca is the worst player of all time. Stephen also discloses that he has mic envy, now that Rob has upgraded his equipment in the podcasting studio.

Stephen provides some insight on Francesca, as he knows her personally. He feels she was very nervous prior to going out there, and her looming fear may have been a self-fulfilling prophecy. He thinks she goes too hard and can’t restrain herself at the start of the game. Rob wonders if Phillip Sheppard is the Moby Dick for Francesca– she can never defeat him. Rob points out some flaws in Francesca’s game, such as her hunch that Phillip might have an immunity idol. Stephen was impressed with Phillip’s ability to secure the numbers quickly.
Next, the Know-It-Alls move into the new white board segment of the show. Rob has put together groupings of photos of all the Favorites showing who is aligned with whom. Dawn and Cochran were the two swing votes between two groups of four (Phillip, Corinne, Malcolm, and Andrea) and (Francesca, Brandon, Erik, and Brenda). Rob and Stephen discuss whether it truly is a “new Dawn” Meehan playing this season.
They also wonder why Malcolm’s name never came up, since he is an unknown entity. Rob asks Stephen if Malcolm is a “choke artist,” having never won a pre-swap challenge. Rob also discusses Erik Reichenbach’s reaction to Phillip’s offer of aligning with him. Stephen thinks Erik didn’t realize he wasn’t in the majority. Stephen is curious about what Brenda’s thought process was. Rob thinks it isn’t looking good for his winner pick Brenda Lowe now, with only Erik and Brandon on her side.
Then Rob and Stephen move into a discussion of the fans. They talk about the two couples “cool kids” alliance of Reynold, Allie, Eddie and Hope. Rob is puzzled as to how this group of four, much like in Survivor One World, seems to think they have the majority. Stephen thinks they imagine their exclusivity will be appealing to people. They also talk about Shamar, who didn’t seem to be aligned with anyone. Rob thinks Shamar redeemed himself after yelling at Matt on the first day and is an asset in challenges. Stephen thought Michael and Matt were the standouts, but Rob had a hard time determining when Matt was talking because of his voluminous beard.
Next, Stephen and Rob answer some viewer questions. They give their thoughts on whether Corinne Kaplan was flirting with Cochran, and if Andrea Boehlke was doing a good job of double-dealing. Stephen also wants Rob’s take on whether Andrea should have considered personal feelings and friendships more when deciding whether or not to vote out Francesca, as Rob has experience with this from Survivor: All-Stars. Rob felt that his friendship with Boston Rob would carry at least a small amount into the game and expect to be blindsided or voted out first from his tribe, but he learned this was not the case. Now he scoffs at players who make alliances ahead of time, since he knows they all go out the window once the game starts. In this case, Rob thinks Francesca and Phillip brought this on themselves and everyone had to pick sides. He can’t fault Andrea for going with Phillip, as she saw Boston Rob take him to the end and win. Rob thinks Francesca’s conversation with Phillip was very telling– she tried to reach out to him but was met with silence, so she may have just gone into defense mode at that point.

Rob states for the record that he doesn’t think Francesca is the worst player of all time, and Stephen concurs. However they would like to see a hypothetical Survivor season of Francesca vs. Sandra Diaz-Twine: “Worst and First.”

They talk about Phillip’s nicknames for his alliance mates, such as “Intelligentsia Attache” for Cochran and “Dominatrix” for Corrine. Rob thinks Malcolm did a good job returning and didn’t make waves. They also talk about Phillip’s “BR Rules,” which he learned from Boston Rob: 1. Make an alliance; 2. Make an alliance within the alliance; 3. Get rid of the alliance before they get rid of you. Stephen and Rob think those are good points, but Stephen would add “Keep your alliance together.”
Rob closes the show sharing some book news– You can get Jeff Probst’s children’s book “Stranded” at robhasawebsite.com/stranded and Phillip’s book “The Specialist: The Costa Rica Job” at robhasawebsite.com/specialist. Stay tuned for Rob’s exit interview with Francesca and full-length podcast with Coach on Friday. Also, you can leave a voicemail question or comment at the new hotline: 323-282-RHAP.