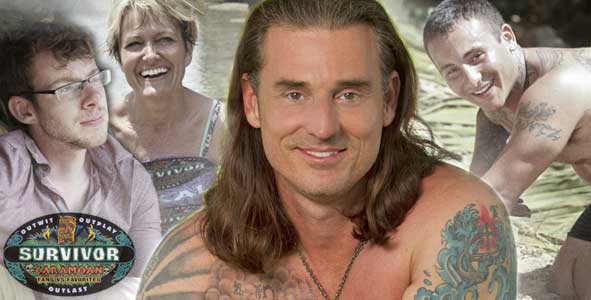 Lots of familiar faces for the Dragon Slayer on Survivor Caramoan.

Returning to Rob Has a Podcast to recap the Survivor Caramoan premiere is none other than Survivor legend, “Coach” Wade. Coach played on Survivor South Pacific with John Cochran, Dawn Meehan and Brandon Hantz and went all the way to the end of the game. Coach joins Rob Cesternino to give his thoughts on the new season.

After catching up with Coach, Rob asks him what he thinks of Dawn Meehan and if he was surprised that she misled Francesca Hogi at the first tribal council. This was surprising to Rob because Dawn’s reputation is that of being very honest. However, Rob reminds Coach of how Dawn went against Ozzy Lusth and Elyse during Survivor South Pacific, so she does have that on her resume.

Turning to Cochran, Rob asks Coach about what he sees from the kid that he played Survivor South Pacific with. Coach discusses the growth potential he sees from Cochran and how Cochran may be in a good position in the game.

Rob brings up how Phillip Sheppard discussed the “BR rules” the other night and Rob wonders if Coach also played the game by the same rules. Rob thinks that there may be a similar evolution to Phillip’s game like we saw in Coach’s game from Survivor Heroes vs. Villains to Survivor South Pacific.

Discussing Brandon Hantz, Rob wants to know if Brandon can handle another time out on Survivor and how Coach was able to deal with Lil’ Hantz. Coach thinks that Brandon is a loose cannon and could go nuts at any moment on the show.

Rob asks about the favorites playing with Malcolm Freberg after not knowing his game, in the same way that Coach played with Brandon’s uncle, Russell Hantz on Heroes vs. Villains. Coach says that if he was there, he would vote out Malcolm immediately because he was an easy target.

Coach answered a number of questions from the fans of Rob Has a Podcast about Cochran, Phillip and the jury from Survivor South Pacific. After speaking with Coach, Rob welcomes Nicole Cesternino.

Rob and Nicole discuss the showmancing couples on the favorites tribe to start the season and whether or not they could become power couples. Then, Rob and Nicole turn to the drama going on over social media by the warring survivors. Rob and Nicole bring up the backlash towards Andrea Boehlke on twitter from a number of Survivors.

Rob and Nicole take a number of voicemails from the listeners of Rob Has a Podcast and reveals the new voicemail number 1-323-282-RHAP. The last voicemail question asks who does Rob think is the worst Survivor player of all-time. Rob reveals his system for determining who the worst player is and gives his pick.

AudiblePodcast.com/RHAP – Find out how to get a FREE Audiobook download from Audible.

RobHasAwebsite.com/DragonSlayer – Coach Wade’s Book “No Turning Back” on Amazon.com