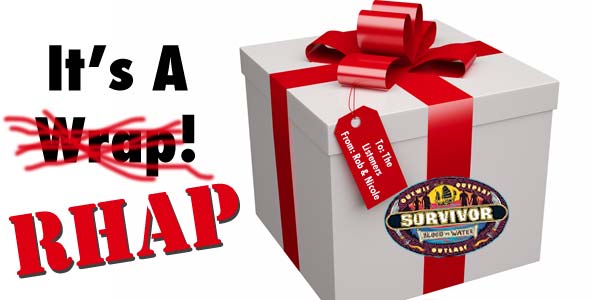 After last weekend’s Survivor Blood vs Water finale, Rob Cesternino and Nicole Cesternino get together one last time to talk about this past season of Survivor.

Rob and Nicole take your voicemails and questions from Facebook on all listener feedback edition of Rob Has a Podcast.

Among the topics discussed in the episode we address your questions on the following subjects:

Would Survivor Blood vs Water have ended differently if there was no Redemption Island? – Jeremiah Panhorst

Should an alliance of 3 adopt the Vytas threat with each other? – Scott Chupack

Was this season popular with fans because of low expectations? – Thomas Mullaney

Why was there no tribute to BB Andersen at the finale? – Thomas Mullaney

What would have been the best time for Gervase and/or Monica to have made a move against Tyson? – Adam Ferrario

Why are competition wins not as important to the Survivor jury as they are to the Big Brother jury? – Michelle from Long Island

How would Rob and Nicole have done on this season? – Matt Morales

When will Survivor return to the Blood vs Water format? – Josh in New Hampshire

What happens after the end of the final tribal council? – Scott from New York

What will Tyson do with his million dollars? – Larry in Pennsylvania

Who played the second best game this season? – Eric Corbridge

Which returning players will probably return again in another season? – Brian Scally

Will Tyson be inducted in to the Survivor Hall of Fame next December? – Ryan Alexander

Who would win the game if Tyson would have pulled the white rock? – Thomas Forsey

What were the best moments of the season? – Brendan Fitzpatrick

Plus many more that I don’t feel comfortable writing about in the show description!