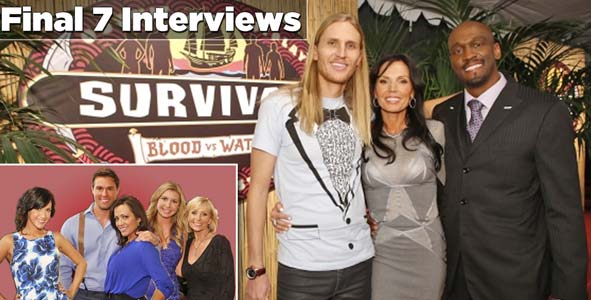 Rob Has Interviews with the Survivor Blood vs Water Final 7

It’s the monday after the Survivor Blood vs Water finale and Rob Cesternino has exit interviews with the final 7 players left in the game.  Short descriptions and time stamps are below if you want to skip around the podcast.

Rob congratulates Tyson on winning Survivor Blood vs Water.  Tyson tells Rob about the personal redemption it was for him to go from the person who lost on Survivor Heroes vs Villains to winning the show this season.  Rob asks Tyson about whether he was ever nervous in the game about Gervase and then Monica flipping on him as it got closer to the end.

Rob asks Tyson at what point he knew he had the game locked up and Tyson says that it wasn’t until after the final tribal council.  Bringing up Vytas question, Rob wants to know if it was an effective strategy to threaten to not vote for Tyson in the end and ultimately go through with that threat.  Also, Rob wants to know if it was truthfulness or strategy that caused Tyson to say that Monica was the person that the jury members should vote for.

Rob and Tyson also talk about Tyson’s gamble to draw the rocks at the Final 6 and what Tyson’s thought process was during that moment.  Rob also reminds Tyson about something that he previously said on Rob has a Podcast about how he would spend a million dollars and Tyson reveals whether he’s sticking to his word (like Vytas).

Rob welcomes Gervase to the podcast for the first time ever after his third place finish on Survivor Blood vs Water.  Rob wants to know more from Gervase about his plans to eventually vote out Tyson.  Gervase explains just how complicated of a situation it was for him in the game to ever take Tyson out.

Rob and Gervase discuss some of the verbal altercations that Gervase got in to during the game, specifically when Gervase yelled at Hayden Moss at the Final 6 tribal council.  Gervase explains that he was trying to get Hayden to get off of his game.  Gervase also talks about how he wanted Tyson to become emotional at Tribal Council to expose himself as the leader.

Going back to the first episode, Rob and Gervase discuss the taunting after the first challenge and how Marissa reacted to him after being voted out.  Finally, Rob tries to comfort Gervase about the loss of his Philadelphia Eagles by reminding him that the Cowboys lost too.

Rob welcomes Monica Culpepper back to RHAP to talk about her second place finish on Survivor Blood vs Water.  Rob asks Monica about how she was perceived by the other players in the game.  Rob and Monica talk strategy and Rob wants to know if Monica’s strategy was misunderstood or if she miscalculated what the jurors wanted to see.

Rob wants to know if Monica was ever tempted to take any of the offers that the other players tried to get her to bite on.  Monica says that she was with Tyson and Gervase 100%.  Rob wants to know why she teased them with false hopes and Monica felt like it was better to give the jury members hope than to flat out tell them no.

Rob brings in the pair of Hayden & Laura to talk about their games on Survivor Blood vs Water.  First off, Rob congratulates Hayden on being the RHAP Fan Favorite Player of the Season!  Rob tells Hayden that he was very impressed with the game that he played on this season, even more so than the game he played (and won) on Big Brother 12.  Rob also commends Laura for her Ozzy-like dominance on Redemption Island, having won 6 RI truels over the course of the season.

Since both Hayden and Laura factored in to the decision, Rob brings up the decision at Final 8 to vote out Laura instead of taking out Tyson.  Laura and Hayden discuss what was said to whom at this critical strategic point in the game.

The last pair of exit interviews was with Tina and Ciera.  Rob expresses the sympathy that all of the Survivor and RHAP community send to Tina about the tragic loss of her son, Taylor.

Turning to the game, Rob asks Tina and Ciera if they ever thought that Monica was going to flip to work with them.  Ciera held out hope but Tina never thought she would.  Rob wonders if its better to give false hope or no hope at all to players headed to the jury.

Rob asks Ciera about the crucial decision at Final 7 to tell Tyson about the plan to vote him out that Hayden, Caleb and Katie were working on.  Ciera says that Hayden wasn’t solid with the plan and she felt like this was a better way to go.  Going back to the first time Ciera switched her vote at a tribal, Rob brings up the Brad Culpepper vote to discuss her thought process during that wild vote.

Rob asks Ciera about the decision to vote out her mom and to see whether it would have been possible for her to vote for somebody else.  Ciera said that it was possible but it was a decision that she wanted to make herself because she felt like it was a better move for her in a number of different ways (both in and out of the game).

Listen to all of the Blood vs Water Exit Interviews

Hover.com – Save 10% on a new Domain Name with promo code: ROB