After two consecutive impressive tribal councils, Hayden was voted out and sent to Redemption Island tonight. Stephen enjoyed his and Ciera’s attempts to sway Monica over to their side, though he didn’t feel there was any actual drama because he knew there was no way she was going to flip. Rob actually thought that both sides made really good arguments, and he wasn’t sure what Monica was going to do until the last moment. Stephen gives kudos to the editors for tricking such a savvy viewer as Rob into thinking Monica would ever turn on Tyson, who went as far as to leave his game up to a rock last week.

Rob asks if Hayden and Ciera made a good pitch, and Stephen feels they made as strong a pitch as they possibly could have, still maintaining Monica never would have really listened to any argument they made. He also feels that in a way, Hayden and Ciera were actually making the case for Tyson and Gervase because she would likely want to go to the end with the “evil people” as they are unlikely to get much support from a jury they backstabbed. Rob feels the argument should have been that Monica has no shot to win right now, but a major power shift in the game combined with four individual immunity wins could give her a strong case in front of the jury – a story to tell rather than no story at all, as Jonathan Penner might say. Stephen disagrees with this fairly strongly, as everyone on the show has his or her own narrative and that’s a difficult thing to think about in a big picture way during the game.

Rob also points out that regardless of what happened tonight, Monica is going to get a mulligan on Sunday night when someone comes back from Redemption Island. Stephen argues that that would have been the danger in voting out Gervase tonight because he feels making a big move at the final five makes you a very likely target at the final four. Stephen thinks mixing things up at the final four is the way to go, and Rob asks what that move at the final four actually is. Stephen believes it’s cutting Tyson and going to the end with Gervase and Ciera, saying Tyson absolutely has to win the final four immunity challenge to guarantee his safety. On that note, Rob was slightly confused that Tyson didn’t even seem to consider playing his immunity idol tonight, but Stephen says potentially having two Moretts on the loose with an idol is a danger he’d want to avoid. Also, Rob asks if Gervase thinks he can actually beat Tyson and Stephen thinks he definitely has concerns about that. Gervase always gets very angry whenever the idea that Tyson is in control and clearly the #1 in their alliance is brought up, and he thinks that it’s hard to imagine he doesn’t know it.

Ciera won immunity tonight, a come-from-behind win that impressed both Stephen and Rob. Stephen didn’t think it was as tough a puzzle as in Survivor: Tocantins, though he may be biased. Rob did feel that “you have to dig deep” was a reach for a “common Survivor phrase” – he wouldn’t have put it in his top 10 – but Stephen disagrees, even though he acknowledges it’s not a Probst classic like “got nothing for ya”. Rob and Stephen also both thought it was a big mistake for Ciera to take Hayden on the lunch reward, because in a position like that, taking the swing vote is critical. However, Rob actually ended up liking the quieter way that Ciera ultimately talked to Monica about changing allegiances, as bringing up defecting during a public meal would have been problematic and would have given Tyson and Gervase time for a rebuttal.

In tonight’s Redemption Island truel, Laura and Tina lived to fight another day as Katie was sent to the jury. Rob and Stephen commented on how difficult it was to watch Tina talk about how much she loves her kids, considering the recent tragic loss in their family. Stephen was a little surprised that Tina actually ended up electing to beat Katie in the challenge, but he understands why it might be hard for a former player (and winner, in this case) who sees “Survivor” as a part of their identity to give up a win like that. The final Red-I truel is on Sunday night, and Stephen and Rob are both very confident that Laura M. will be coming back, as she’s been cleaning up in the challenges pretty much all season long. Rob notes that while it’s commonly accepted that “Survivor” favors males, Red-I challenges usually favor women. Stephen claims that nothing is fair about Survivor, but the unfairness is pretty evenly distributed that it hits everyone at some point in the game.

As they always do, the Know It Alls close the show by taking your questions. Who will be the most and least bitter jurors on Sunday? Who will be the fan favorite player, if there is one at all? Will Hayden calling Katie hot spell even more trouble for his relationship with pre-merge boot Kat? Do Stephen and Rob trust each other on level 10? And why is Stephen hogging all the questions? Plus, Rob and Stephen go through the power rankings of the final seven players heading in to Sunday night’s finale on this final Wednesday night of Survivor Know It Alls!

Read Rob’s Live Chat from After the Episode on Google+ 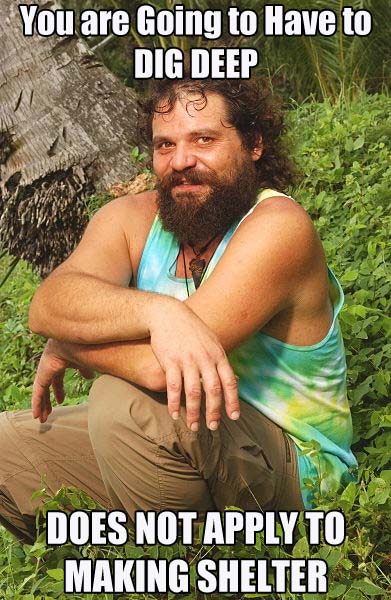