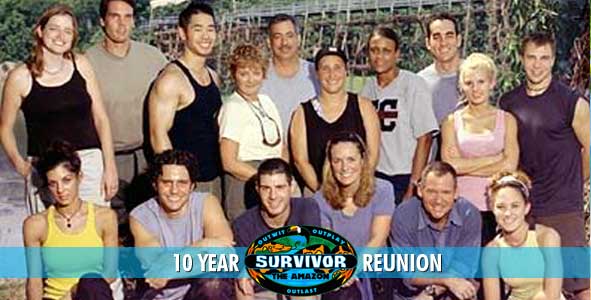 10 Years After the Premiere of "Survivor: The Amazon", the gang is getting back together.

It’s 10 years after Survivor: Amazon aired and to celebrate Rob Cesternino is hosting a reunion show featuring some of his Season 6 castmates. Roger Sexton is joining Rob in person in the podcasting headquarters. Joining in the Google Hangout are Alex Bell– who has a RHAP fan he met at his gym at his house; Butch Lockley; and Jenna Morasca- the winner of Survivor: Amazon. Rob explains the absences of some of their other castmates: Deena got called away to work, Christy is in India, Heidi is driving to Florida for Spring Training, and Matthew Von Ertfelda is also working.

Alex Bell gives an update on his life in San Francisco. He is married to Kim Powers, from Survivor: Africa, and they have two cute cats. Butch has been retired for six years and he’s been doing a lot of motivational speaking around his “Believe in Yourself” motto. Jenna says she is working on a book and the program she recently hosted, Everyday Health, was nominated for an Emmy. Roger is a proud Grandpa and he is a year away from retirement.

Roger talks about how it was pretty brutal after he was voted out and he was suprised to see how much people hated him. He showed some episodes to his grandkids and they couldn’t understand why he was voted out. He said it was really hard to be called a chauvinist. Alex talks about how his conversation with Roger about homosexuals adopting kids was something people talked to him about the most. And Roger says he got a lot of people, including homosexuals, who respected him for his opinion. He has not changed his opinion but says he is fine with gay people getting married. Rob tells Roger he says he regrets saying that Roger was a “bigot,” and that is his one thing he would take back from his time on the show.

Butch then tells a story that wasn’t shown on the show. Heidi’s father worked at a hospital and she was taking food from a cafeteria for “needy people,” which really bothered Roger. Roger says he couldn’t stand Heidi when he first met her and didn’t believe that she was a “braniac.” But he no longer has issues with her and he is impressed by her husband, Cole Hamels, who he says is an amazing athlete.
Butch says he still watches Survivor and he thinks it has gotten easier since their season. Roger agrees that Amazon was a transition show– the last real Survivor show– and that the show changed after the first 6 seasons.

Roger talks about how there were so many opposites who were cast on the show to cause conflicts, and he predicted Jenna would win but he thought Heidi would stay longer. He thinks because the finale was on Mother’s Day, that they wanted a woman to win.

Alex discusses his previous job where he and Kim got to take the non-jury people from Survivor: Nicaragua on their trip. He said they had a blast, but Jimmy Johnson didn’t go with because they thought he was too recognizable. Survivor Shannon also did not go with because of a root canal.

Roger also talks about how Ryan aggravated him by making too much noise at Ponderosa before they started the game when they were trying to sleep.

Next, Rob moves into questions from fans. Kosta (@RobsFactChecker) wants to know who brought the granola bar. Alex shares an exclusive story: He says when he went to change pants before the show started he found a granola bar wrapper in his backpack. He thinks it was a plant, and he could have been in the same situation as the women’s tribe had he not discovered it. He handed it to someone in production and he said they told him someone must have dropped it when they were packing the bag. Rob doesn’t think the producers would need to manufacture that kind of drama, but others aren’t so sure. Jenna still thinks Christy did it.

Brian Farrell wants to know about fun moments that weren’t shown on camera. One highlight was throwing a wedding for Alex and Heidi, with Rob presiding and Jenna as a bridesmaids. Butch really enjoyed practicing the blowguns for a challenge and playing beanbag toss. Butch talks about how he gets the most grief about the firewood, but he blames Matt for tossing a log on the fire before they left camp. Roger has another theory, because there was a still camera focused on the fire.

Liz Irwin wants to know why Shawna’s face was so dirty. Jenna jokes that it was Alex’s slobber. But Alex says she was like Pigpen- she attracted all the dirt at camp. Another listener asks about the toga party after Rob was voted out. Butch insinuates he has an incriminating photo of Rob, so Rob wants to explain himself. Rob says he had been drinking without having any food and they were playing a drinking game invented by Mark Burnett called “Find Your Limit.” Alex has a clear memory of the night since he doesn’t drink, and he reveals he did the naked hokey pokey during the game. At one point in the game two girls in the crew were going to kiss but they wouldn’t do it until two guys did it, so Mark Burnett told Rob to do it. Rob kissed Dave Johnson very quickly, but Butch captured the moment on film. Alex also has a copy of it. Rob says that the girls didn’t even kiss after that.

Natalie Kuchik wants to know if anyone has any memorabilia they kept. Rob shows the burnt Magic 8-ball, which still works. Jenna says she has tree-mail that she got from Dave Johnson. Alex, Roger, and Butch have their machetes, and Butch also has the beer cooler from their reward challenge. Jenna also has Rob’s vote for her to win. Roger and Jenna also kept their buff from the show, even though they were supposed to turn them in.

Butch also talks about how Heidi, Matt, and Alex have been to his hometown and everyone was really impressed with them and they made a good impression on his community. Rob wants to know what Butch and Matt used to talk about for all those hours they spent fishing. Butch says he was really glad to have Jenna’s hat because they used the wire for hooks. Jenna says she brought the hat for that reason.

James Valdez wants to know if Matt was really as creepy as he was portrayed on the show. Rob thinks the show overdid it with their music and editing. Alex and Jenna think he wasn’t really creepy but was socially awkward. Jenna says there was a moment when he did get a little dehydrated and crazy, and had a hard time when he was almost voted out.

They also discuss the question about whether Christy intended to vote for Jenna, and Jenna says it wasn’t a mistake. Jenna and Alex both say that they didn’t like Christy on the show but they really like her after the show. Another fan wants to know if Butch is still a “wood-crazy nut” and he says he is. Butch says he blames Rob for his loss by voting Christy out– he knew Christy was voting with the guys. Butch had wanted to get a tattoo if he won, and had told his wife at the family visit that he thought he would win. Alex says one of the things he feels worse about is that his mother was out there for the family visit, and she didn’t get to see him because he was voted out.

Another listener wants to know if Alex harbors hard feelings toward Rob. Alex says he has no hard feelings and the only reason he got as far as he did was because of Rob. He thinks Rob should have won and he thought of him as a little brother while they were out there. Rob thanks Alex for the sentiments and he felt Alex and Deena were big threats to win the game, and that Alex, Jenna, and Heidi had become closer. Alex says that he would have never voted Rob out– he would have taken him to the end. Rob says he wishes he had known that while he was out there!

Jenna thinks a cool twist would be if they brought an entire cast to play again. Roger says Ryan and Dan still would have been voted out. Roger regrets not getting together with Christy and Jeanne to vote out Heidi. But Alex says then he would have ruined the most memorable moment from their season– Jenna and Heidi stripping for peanut butter and chocolate. Roger says he stopped watching the show a long time ago because he got frustrated by returning players– he doesn’t think they should bring anyone back.

The men also talk about they had planned to wear speedos to the second challenge. Jenna reveals that the women also had a lot of “hot and bothered” conversations at camp although they only showed the men talking about it. Rob wants to know whose names came up in these discussions. Jenna says Heidi was talking about Dave, Shawna was talking about Alex, and she was talking about Alex and Rob. She says Alex was the most popular. Roger says when he and Shawna were traveling she kept talking about Alex. Roger told her bluntly that he didn’t think Alex was that into her, and she got so upset– he says she went off the deep end emotionally. Rob points out how Matt worked his way into a love triangle with Alex and Shawna.

Another viewer wants to know who would have been fan favorite from their season. A lot of people think it would have been Rob, but Rob thinks it could have been Matt or Christy. Roger thinks Matt played a great game, but it would have been a terrible show if the guys’ plan had worked out. He said even Jeff Probst alluded to that. Roger has even called Jeff Probst on the phone because he heard him calling him a racist, and he also called him to let him know his thoughts on returning players.

Roger talks about Rob’s Casey Kasem vote out. He heard him do the song at tribal, and Jeff Probst got mad at Rob saying “I swear to god- I hope you had fun because that will never, ever get on the show!” Alex says Jeff also got mad a Rob for saying something about being at home watching the TV show.

The group wraps up by talking about some of the most common questions and comments they get about the show. Butch says everyone wants to know if they get toilet paper and if it’s really real. Jenna tells people to follow her on Twitter (@jennamorasca) and Alex says he’s not very active on Twitter but he’s going to try to make it to the CrossFit games if people want to check that out. The group all enjoyed catching up with each other and hope to have a reunion in person some day. Rob reminds people of the Survivor Amazon commentary available at www.survivor6commentary.com.