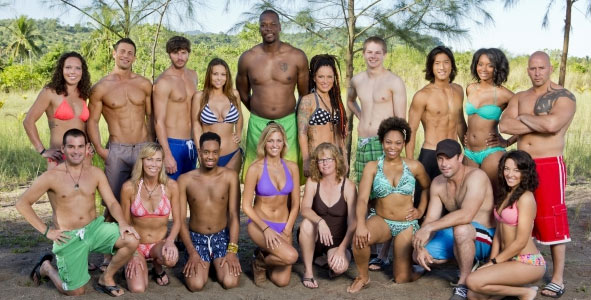 The Survivor Cagayan players were announced today on CBS.com on EW.com and Rob Cesternino and Nicole are back to tell you about the 7 things you need to know about the Cagayan cast.

Survivor 28 will premiere in a 2-hour block on Wednesday, February 26th on CBS. The big twist to the game is that the three tribes will be divided into groups of “Brains”, “Beauty” and “Brawn”. The season will NOT feature a return of Redemption Island.

Here are the 7 Things You Need to Know about the Survivor Cagayan Cast:

1. Former NBA Star, Cliff Robinson, is on the show… and he just went to North Korea with Dennis Rodman.

Following in the footsteps of Gary Hogeboom (Survivor Guatamala), Jimmy Johnson (Survivor Nicaragua) and Jeff Kent (Survivor Philippines), Cliff Robinson becomes the latest professional athlete to compete on Survivor.  Cliff was an NBA All-star in 1994 for the Portland Trailblazers and played on five different NBA teams.  Cliff naturally will be part of the Brawn tribe.

2. The team president of the Miami Marlins is also on the show.

Another person with ties to profession sports on this new season of Survivor is David Samson, Team President of the Miami Marlins.  Samson has worked for Marlins owner, Jeffrey Loria, since 1999, when Loria owned the Montreal Expos.  Samson actually had to leave the Marlins during the baseball season to compete on Survivor (Cagayan filmed during August of 2013).  Samson will be one of the players on the Brains tribe

Here’s a clip of David Samson being interviewed by Bryant Gumbel… who coincidentally hosted the first three Survivor reunion shows:

3. The tribes are divided in to Brains, Beauty and Brawn but many players are interchangeable.

While the tribes are broken up in to Brains, Beauty and Brawn, many of the players could have been on multiple tribes.  We thought it would have been funnier if each player could have only fit in one category, but that’s definitely not the case.  While there are some players who were cast perfectly for this season, you could swap a number of cast members from tribe to tribe and the cast would still make sense.

4. There is actually some diversity this season.

Over the years, Survivor has been criticized for having enough diversity but this cast features four African Americans (Brice Johnston, Cliff Robinson, J’Tia Taylor and Latasha Fox) and an Asian American (Yung “Woo” Hwang).  This is the most diverse cast since Survivor Fiji which was season 14, which was exactly 14 seasons ago.

5. There are Two former Cheerleaders.  There are also 2 Police Officers that are on the same tribe.

More likely to impact the game is the fact that Sarah Lacina and Tony Vlachos are both current police officers.  The two players are both on the Brawn tribe.  It will be very interesting to see whether this bond will affect the early tribe dynamics in a group of only 6.

6. There’s a villain in the cast… and he just may be a RHAP listener.

It wouldn’t be a Survivor cast without one player who really wants the title of villain of the season.  Enter Spencer Bledsoe, a 21-year old student and master chess player.  Spencer talks in his videos about how he is used to being the smartest person in the room and looks forward to crushing the hopes and dreams of those that he will blindside in the game.

As for being a potential fan of Rob Has a Podcast, Spencer mentions both Rob and Stephen Fishbach in his bio on CBS.com, but there’s something else that makes us think he might be a fan of the podcast.  Look at how he answers the following question:

There’s no possible way that he would mention “tighty whities” and “little boy” in the same sentence unless he knew about the greatest music video ever recorded.

7. This cast is older than your typical Survivor cast.

Out of the 18 players in the game, 12 of the 18 cast members are 29 years old or older.  To compare to the last season of Survivor with 18 players (Survivor Philippines), there were 9 players 29 or older on that season.

While the oldest member of the cast is only 48, I believe that having players with more life experience will produce a better game.  I believe that the sweet spot for Survivor success is being in your 30’s (younger and older players have won, but a Survivor player hits their prime between 30-40).  In your 30’s, you’re old enough to know who you are but still young enough to compete against the youngsters. Considering that one of the younger players is Spencer (21), I think we are going to see more people who are playing hard and fewer people who are completely overwhelmed by the stress of the Survivor experience.